Your theme of the week:  “What goes around comes around”.  Sounds OMINOUS.  To the Observer!

– The big lesson of Super Sunday appears to be that all the planning in the world doesn’t matter if good wrestling isn’t part of the plan.

– The results of the polling where a landslide in favor of the Clash, with 94% of the 532 respondents preferring the TBS show.  (Man, how was he making money with only that many subscriptions?  I guess it was a much smaller operation then.)  You’d think that Flair v. Sting would win “best match” voting in a landslide as well, but actually lots of people preferred the Midnights-Fantastics match and even the Luger/Windham v. Tully/Arn match got a lot of votes.  (Hot take:  I actually liked the Midnights match best, too.)

– One thing that is certain is that Sting is the hottest guy in the business coming out of the Flair match, which is really odd because he’s never had a singles win over a name guy before, or won a singles title, and his interviews kind of stink.  But charisma can overcome all those.  Flair may have controlled the pace of the match and carried it, but Sting deserves a lot of credit as well for making it as great as it was.  Sadly, there’s little room for Sting to keep going upwards, since Nikita Koloff is getting the title shot at Crockett Cup and Dusty Rhodes is going to be making himself the focal point of the promotion as the Midnight Rider again.

– Although Wrestlemania was a huge flop based on the estimates and predictions thrown around by the WWF themselves, they still managed approximately 585,000 buys on PPV, plus another 200,000 people on closed circuit, for a total of about $16 million gross.  So, not bad.  Dave estimates that without Crockett f------ with them and the same interest as last year, it would have been closer to $26 million.  (Clearly this PPV thing is the future.)  However, even though it was profitable on the night, that’s not the real test.  The test is whether interest from Randy Savage as champion will do well enough to offset the drop in revenue, since traditionally houses have dropped dramatically after Wrestlemania and the big show needed to make huge money to keep them up for the year.  Since this one was so far down, Savage is going to have to draw huge.

– The Clash scored an impressive 5.8 rating overall, with an even more impressive viewing pattern where the rating increased every quarter hour for the entire show.  The Flair-Sting match itself scored a 7.1, the highest rating for wrestling in the history of cable TV.  (Which stood for a LONG time, finally being shattered in the Monday Night Wars by an episode of Nitro in 98 and then the Austin-Undertaker match.)

– Dave feels like the complaint about Wrestlemania’s length was a bit unjust.  It’s not the length of the wrestling show, it’s how you use it!  Advertising 16 matches and then delivering a 3 hour and 40 minute show is totally justified, but the atmosphere was a killer and the matches were boring.  (Just wait until Wrestlemania V, which was even LONGER and possibly just as boring!)

– However, one justified criticism was papering the Trump Plaza with non-wrestling fans.  The WWF storylines might be simplistic, but even they aren’t SO simple that you can just stick thousands of non-fans into the building and expect them to understand what the f--- is going on.

– Also, the judging gimmick of the Clash main event was complete b-------, since they promised a winner and delivered a draw, plus heavily implied that Jason Hervey and Ken Osmond were judges but in fact were just sitting at the table.

– Dave does clarify that Strike Force coming out with the belts on that TV taping was in fact a swerve, in that Slick then taunted them back to the dressing room without the belts, and they redid the intro without them.  So the cameras weren’t rolling when they were wearing them.  Dave still can’t put his finger on why fans don’t like Strike Force.  (“Hey, here’s this tag team you really liked, but whoops, one guy suddenly left without any reasonable explanation given, so instead we’ll just stick this other guy in his place and then immediately make them champions.”  Wonder why THAT didn’t work?)

– Also, Dave was pretty bugged by them completely ignoring the twin referee angle and just having Earl Hebner referee a bunch of matches.  (Yeah, even PWI was calling b------- on that one, so you know it was eating at people.)

– Also, Dave was pretty bugged by Steve Williams randomly returning on the Clash with no mention of the UWF title or the heel turn that was brewing for months leading up to his departure.

– Dave calls complete b------- on the WWF’s claims of “50 million people watching in 38 countries”, since the only places you could watch the show were the US or Canada.  Perhaps, he wonders, it’s the same fictitious countries where the Sheepherders won all those tag titles?

– Apparently C-Band satellite dish owners got Wrestlemania for free by finding the right signal, except that there was no audio.  Dave jokes that he had his sound turned down anyway.

– On the bright side, although Wrestlemania IV was perhaps one of the worst big shows in history, at least no one rioted.  (OOOOOOOOOH!  SICK BURN ON INOKI!)

– Not really a correction as such, but Dave admits that when he predicted that Wrestlemania would still draw $25 million and the Clash wouldn’t hurt them that much, he was WAAAAAY off.  At least, he notes, Titan itself was even more delusional than he was.

– Dave thinks that Randy Savage lost a lot of steam while winning the World title, because he got to look like Hogan’s stand-in.

– Overall, Dave thinks that this WM will be the equivalent of a stubbed toe for Titan, in that they’ll stumble for a few weeks and then go right back to being #1 again because Crockett is burning out his guys on the double-shot house shows and you can’t sustain them that way.  And really, as long as Vince can keep going on TV and saying that Wrestlemania was a success, no one will know any differently.

– Finally, Dave wraps it up and brings the quote from the top into things, noting that Vince picked a fight with the Royal Rumble and Crockett retaliated and cost him $10 million as a result.  What goes around comes around.  (AKA “The lesson that no wrestling promoter ever seems to learn, ever.”)

– Vince did get one bit of revenge, buying five ads for Wrestlemania on the Clash under a fake business name and actually managing to get one of them through to air.

And now, time to workshop a new feature that I’m very excited about! 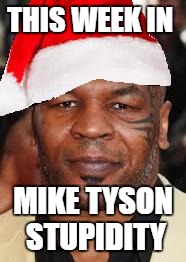 – Over in Japan, the Malenko brothers got to meet Mike Tyson, who is currently taking the country by storm.  They were really impressed until they realized that Tyson thought they were the British Bulldogs.  So Dean and Joe decided to play along and pretend, at which point Tyson asked them if he could pet Matilda.

– The Penthouse issue featuring the Von Erichs has now been dropped from the schedule with no date announced.

– Lance Von Erich’s refusal to return to World Class also stems from his current success as a babyface in South Africa, where he’s doing well, plus some legit bad blood between himself and the real Von Erichs over the way he “embarrassed” them by leaving.  (Think about how bad a thing he must have done if THAT’S what embarrasses this family)  Dave thinks it’s a blessing in disguise for him to stay away, because a match between Lance and Kevin would be bad enough as it is, but imagine how bad it would be if they were trying to shoot on each other?

– Unfortunately, Eddie Gilbert has already left Memphis at the height of his heel run and will be going back to booking Continental.  He left a bunch of tapes to run a bounty angle with other heels in his place against Lawler for the time being, with the plan long-term being that the two groups will start working together.  (Oh, what, they’re all gonna team up with the AWA and do a PPV together?  LIKELY STORY.)

– Verne Gagne is drastically scaling back the house show business, mostly just looking for paid shows in the Minny area to keep the promotion alive long enough to send tapes to ESPN.

– Dave thinks that Nikita getting the title shot at Flair on the Crockett Cup show is admirable for personal reasons, but stupid for business reasons when Sting is RIGHT THERE.

– Although the Hogan wrestling movie appears to be smoke-and-mirrors from him, there is a Piper wrestling movie in the works for release around Christmas, and he’s “up to his ears” in very legit offers from Hollywood.

– And finally, Baba’s spoof of the Maeda kick, where Stan Hansen went crazy on Tenryu after a “shoot” kick and then later chased him down into the dressing rooms only to have Tenryu barricade himself in, has actually WORKED and Hansen is suddenly the hottest guy in the promotion.  Fans totally bought the nutso angle and now think he’s a legit dangerous badass.  (How you can NOT love wrestling?)