Back to regular dating again.  I wonder if Dave just typed “January 15” by accident last week instead of “January 18”?  I MUST KNOW. 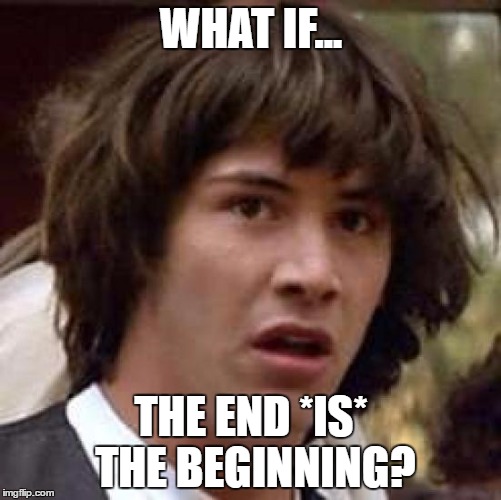 – No, that would just be stupid.

– With tons of hype and Andre v. Hogan on top, there’s no way this show won’t smash all ratings records for wrestling.  In fact, given good numbers, it could lead to a weekly prime time show on the network.  Hey, Dave notes, don’t laugh: Think about how unlikely it was even four years ago that wrestling would be on network TV, and yet here we are.  Pretty much everything Vince has touched in 1987 turned to gold, and network TV honchos like money.  (I also like money!  Just like Mr. Krabs!  Lemme tell ya, you watch a metric s----ton of Spongebob Squarepants when you have a six-year old.)

– Could this increased success on TV mean that Jim Crockett might get a TV slot as well?  Unlikely, and the reasons are threefold and Dave shall now list them:

Reason the First:  Crockett and the hypothetical TV network would never be able to agree on the format of the show.

Reason the Second:  You would have to pry creative control out of the cold dead heads of Crockett and Dusty.

Reason the Third:  Dusty Rhodes as the star of a network TV show is just…no.  Not happening.

– Dave notes that Vince would actually be quite stupid to accept a weekly network TV deal, because with SNME he can produce 90 minutes of TV every two months and look like the golden child, but given a weekly deadline and ratings pressure the product would quickly burn itself out and those money-loving TV execs would probably turn around and boot him off the network.  On the flipside, Vince would make more money than Scrooge McDuck’s vault in that one season before he imploded, so there’s pros and cons both ways.  And besides, there could be a huge scandal any day now that completely tanks the entire wrestling business, so why worry?  (OK, calm down there, Dave.)

– The most likely scenario for the Main Event (Attaboy, bring it back to the TOPIC, Dave) is Andre winning the title and Hogan challenging at Wrestlemania as a mere mortal, but the public is fickle and they might not want to risk taking the belt off him.  Like really, Hogan has been drawing money for four years as champion, why mess with it?

– Dave really goes on a limb here and he’s pretty sure that Bunkhouse Stampede is gonna bomb. 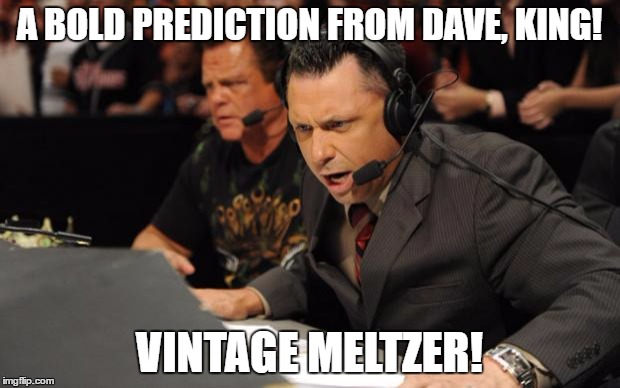 – So yeah, it turns out that Crockett has in fact been mostly exaggerating the number of cable systems that this disaster was actually cleared for, and it’s certainly not going to be anywhere near the six million that he’s claiming.  Plus they needed to hit a home run with their first PPV, and they’ve barely even hyping up the show on TV.  In fact, if this flops badly enough, it’s probably going to discourage cable companies from even carrying the Crockett Cup PPV.  (Hey, remember when they were gonna put the Crockett Cup on PPV?  Good times.)  In fact, Dave isn’t even sure why they’re screwing around with the Bunkhouse Stampede match on PPV when the big money match they DO have is Flair v. Luger.  (I have an idea…) 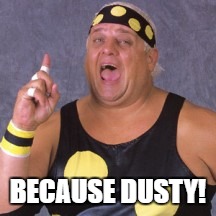 – OK, enough with Crockett’s stupidity, let’s talk about Verne’s stupidity instead!  It’s actually been a few weeks since he did something dumb anyway.  So the Midnight Rockers are the new AWA tag team champions all of a sudden, because they didn’t have their tag champions under contract and both Randy Rose and Dennis Condrey gave notice at the same time because they weren’t making any money.  Well, not quite true, Condrey WAS on a guarantee, but after Rose quit, Verne decided to cut Condrey’s money on the spot and he quit as well.  (What, Dennis Condrey quit on a moment’s notice? Perish the thought!)  Technically in the match that was taped, they did a double pin and the referee declared the Express as the winners, but since they weren’t coming back, they just had Stanley Blackburn “review the footage” and declare the Rockers the new champions.

– In ratings news, now that Ron Garvin is no longer World champion, the Crockett wrestling shows have returned to the top 15 in syndication.  How about that.

– In Japanese women’s news (which I’ve been skipping all the time), the All Japan Women’s promotion has kind of self-made problem in that Dump Matsumoto is going to be forced to retire at 27 years old (she was already working past the mandatory age limit of 26 as it is because MONEY) and they’re kind of screwed without her.  With the success of the Jumping Bomb Angels stateside, it’s looking likely that Titan will take her as the newest challenger for Sherri, since Vince also likes money.  Meanwhile, AJ Women just have to hope that hot newcomer Bull Nakano works out as a heel on top.

– For those keeping track, neither Bill Dundee nor Jerry Lawler turned heel in Memphis yet again this week.

– Dave mentions offhand that newcomer Max Payne is coming in, and we’ll get back to that in a bit.

– The Nasty Boys are rumored to be bound for the AWA soon.  (Sadly they didn’t take that Road Warrior gimmick with them.)

– Dave thinks that Jerry Lawler might be getting the AWA title from Curt Hennig soon, which isn’t based on anything more than “a few strange happenings which he can’t go into”.  (Oh come on, you can’t just leave that one hanging there!)

– Tom Zenk did in fact debut for the AWA as a babyface and Dave is already worried that Verne is gonna bank too heavily on him.  That’s the reasoning behind why Nord the Barbarian isn’t getting a big push despite his insanely popular car commercials, because if they make him a big star in wrestling, he’s just gonna go back to selling cars for his family anyway.

– Crowds remain strong in Calgary with Jason the Terrible on top.  (Given the benefit of hindsight, we all know where Butch Moffat would have ended up eventually, and he probably would have padded his savings account pretty good in the process, brother!)

– Weirdness from Dave, or maybe just a lack of info.  Gary Albright is supposed to be debuting for Stampede soon, and Dave says there’s talk of teaming him up with former All-American wrestler Daryl Peterson, the 350 pound guy who was trained in New Japan along with Chris Benoit.  Now, as you see a few sentences above there, Dave already mentioned that Max Payne is coming into Memphis, and as we now know, Max Payne = Daryl Peterson.  Anyway, obviously it’s the hazards of doing this kind of thing in the days before the internet, but I just thought it was interesting that Dave didn’t know to make the connection at that point.

– To New Japan, where oddly enough the UWF had been operating as a business entity all these years and was finally folded into New Japan itself this week.  Turns out that Akira Maeda actually kept the business incorporated so that he could negotiate with his crew as a single entity and sell shirts with the logo on them and such, but now that he’s been fired, they just dissolved the company.

– Adrian Adonis and Bob Orton are in as a tag team.  (This ended up being the last hurrah for Adonis in the sport, sadly.)

– FRITZ VON ERICH UPDATE:  Crowds are up, so Fritz is doing better and he’ll be doing an interview on TV next week.

– WORLD CLASS OWNERSHIP UPDATE:  Ken Mantell actually owns 30% of the company, but calls all of the shots.  Dave calls b------- on that because Fritz called at least ONE shot that he knows about.

– As a followup to the Von Erichs Over America tour that got cancelled, promoter Chris Corey scheduled a wrestling show as a double bill with a women’s tennis match.  Luckily for everyone concerned, the tennis promoters pulled out and they cancelled the show.  Dave just can’t even with that one.

(By the way, for someone who was asking, the Von Erichs Over America tour was Fritz going on a national tour of cities where World Class typically doesn’t run, like in the Crockett and WWF areas in the North and East, for a series of one-shots featuring the Von Erichs on top without any specific TV behind them.  Kind of like the modern WWE model for house shows, where you buy tickets to see the brand and not the card.  They drew about 300 people or so for the first few shows and scrapped the rest of the tour.)

– Thankfully, Dave doesn’t keep us in suspense for another week, and clarifies that Lawler isn’t winning the AWA title this week.

– Despite hopes that cooler heads would prevail, Crockett is setting up THREE offices in Dallas for himself, JJ Dillon and Dusty Rhodes to work out of, and they’re going house shopping there.  (Don’t forget to get the REALLY expensive marble-topped desks with the gold trim, because that’ll help your shitty PPV business, Jim!)

– Lex Luger and Barry Windham teamed up to fight off the Horsemen on the last TV tapings, which Dave notes is a way to draw out the mystery of who the new Horseman will actually be while they actually figure it out.  Dave nominates Steve Williams or Ron Garvin, but doesn’t see any other candidates.

– They shot an angle at a basketball game, sort of, as Dusty Rhodes and Ric Flair were both in Chicago for a Bulls v. Celtics game on TBS and they do promos on each other.  Dave thinks it’s silly because a lot less people watch the NBA than Crockett’s own show, and it just makes them look small-time.  (I’m assuming the NBA wasn’t the ratings power in 88 that it became in the 90s?)

– Mike Rotundo is really committing to the Varsity Club deal, and wearing a singlet with “Syracuse” on the front while playing a preppy amateur jock heel, and it’s been entertaining so far.

– Dave still doesn’t know where Wrestlemania IV will be, although it’s not in any domes because they’re all booked up on 3/27.  He does know it’s a 20,000 seat arena somewhere, although it’s a closely guarded secret for whatever reason.

– Joel Watts had been working for the WWF’s TV production team post-UWF, but has quit and in fact is out of the business altogether.

– Warrior’s rise up the card begins this week, as he’s moved from pinning Steve Lombardi in openers to pinning Harley Race in the midcard.  Dave calls it a “sign of the times.  Not a good sign, but a clear sign.”  He’ll be programmed with Hercules next.

Next week:  The end is the beginning is the end or something, as we loop back to where we started with the Royal Rumble issue, my very first Wrestling Observer Flashback!  How’s THAT for bringing it full circle this issue?