– Dave’s gut feeling is that Survivor Series “did well”, although any money that it draws is just gravy on top of the delicious turkey dinner that is personally destroying Jim Crockett’s dreams of PPV.

– To make matters worse (for Crockett), Starrcade sucked and Survivor Series featured a bunch of guys (and gals) who were really fired up to put the screws to the NWA and delivered a strong thumbs up show.

– Now, for the laundry list of annoying things about Starrcade:

1)  The camera work was sub-par, missing things like Sting’s dive in the opener and JJ stealing the key from Johnny Weaver.

2)  There was a MILLION announcers for no reason, and the interviews were obviously just done to kill time while they set up scaffolds and cages and whatnot.  Most egregious was Michael Hayes standing there like an idiot while Jimmy Garvin blatantly rambled to stall for time.

3)  Tony Schiavone spent much of the show emphasizing how GREAT all the matches were, when clearly they weren’t.  (Tony over-sell a mediocre moment?  Perish the thought.)

4)  The matches were all rushed to fit into the 2:30 satellite window, especially the Flair match, which was the one match that shouldn’t be rushed.

On the bright side, Missy Hyatt’s black dress looked nice.

And now, the Thanksgiving War Awards!

Best Performer goes to Bret Hart.  Worst goes to Dusty Rhodes, only because Andre doesn’t count as a wrestler any longer.

Dumbest booking move goes to whatever they were trying to accomplish with the Road Warriors v. Horsemen finish. Basically the NWA brass doesn’t actually communicate with their fanbase and they don’t understand what a dire situation that the promotion is in, especially when TV ratings have dropped FORTY PERCENT in the two months since Garvin got the title. You can’t piss off the fanbase that’s already tuning out in droves, and this match was designed to do exactly that.  (This is another one that snowballed on them and became a nail in the coffin of Jim Crockett Promotions.)

Most “spineless booking decision” was having Hogan attack Andre and not even letting him celebrate his win.

Best decision was keeping David Crockett off the show.

Person with the most to be thankful for:  Ted Dibiase (Dave gives a little “wink wink” type of comment here, which I assume means “Thankful that he didn’t sign with Crockett instead of making huge money with the WWF.”)

1.  Duggan/Savage/Steamboat/Beefcake/Roberts beat Race/Honky Tonk/Hercules/Danny Davis/Ron Bass in 24:00.  Race and Duggan were counted out early, hurting the workrate on the heel side right away.  Match was pretty bad for a while with lots of restholds, which is ridiculous when you can just tag a fresh guy in.  (That’s what I always say!)  Bass, Davis and then Hercules all got knocked off by the babyfaces, leaving Honky 3-on-1 against the Snake/Dragon/Macho trio, and he wisely took a walk to end the match and live to fight another day.  **1/4  Honky is pretty entertaining, Dave will concede.

2.  Velvet McIntyre/Jumping Bomb Angels/Rockin Robin/Flabulous Moolah beat The Glamor Girls/Dawn Marie/Donna Christanello/Sherri in 20:00.  Fans booed the hell out of Moolah every time she tagged in, despite being a babyface.  Match came down to Angels v. Glamor Girls, and it was pretty good for the last couple of minutes until the JBA finished them quickly in succession to win.  Just OK overall.  **

3.  Killer Bees/Attack Squad/Roma & Powers/Bulldogs & Rougeaus beat Demolition/Hart Foundation/Dream Team/Islanders & Bolsheviks in 37:00.  This was one where there was ZERO resting, thus proving the theory from earlier.  Match came down to Islanders v. Bees & Stallions, ending with the Bees doing the mask switch and Blair pinning Tama with a sunset flip off the top to win.  Great unpredictability, since the winners were the guys everyone expected to go out first, and it was hard work from start to finish.  ****

4.  Andre/Gang/Bundy/Reed/Rude beat Hogan/Bigelow/Orndorff/Muraco/Patera in 22:00.  The babyfaces worked way over expectations and looked really good.  Hogan got to squash Reed, but got counted out after beating up the heels on the floor, leaving Bigelow 3-on-1 against Bundy and Gang and Andre.  He then proceeded to drag a great match out of them by himself, selling his ass off and miraculously pinning Gang and Bundy before succumbing to Andre’s dreaded semi-vertical suplex deal. ***3/4 Hogan attacked him afterwards, and Andre-Hogan looks like a strong main event for Wrestlemania IV.  (So how did they f--- it up so badly?!?)

2.  Steve Williams retained the UWF title over Barry Windham in 7:00.  Booking was atrocious here, as Doc got headbutted in the groin, but Windham wouldn’t go in for the kill, only to get pinned with an Oklahoma roll moments later.  This was supposed to be the beginning of a Williams heel turn, but the crowd didn’t understand that at all. (Just as well since they dropped that idea right after the show!)

3.  Rock N Roll Express beat the Midnight Express in a scaffold match at 9:35.  Same gimmicks as last year’s show, and it meant much less to the card, if anything.  ***

4.  Nikita Koloff pinned Terry Taylor to unify the UWF and NWA TV titles in 18:35.  First 10:00 were so boring that it was looking like a lock for Worst Match of the Year.  Neither guy wanted to cooperate until it became apparent that they were stinking up the joint, and then they finally loosened up.  Taylor has been buried on TV so badly that it would have been ridiculous for him to win, but the slow start didn’t work at all for that very reason.  *

5.  Tully & Arn beat the Road Warriors by DQ in 14:00.  Dave explains here why there’s no “Iron Man” on the show, because at the time a show taped for home video release can’t use licensed music without paying the artists, whereas free TV was just kind of counted as advertising for them.  (Man, did THAT change!  Now you can barely hum a song on YouTube without getting a letter from ASCAP.) Match was a good, solid tag team affair, but then the dreaded Dusty Finish, which no one wants to see, let alone on the biggest show of the year, ruined things.  Dave notes that there are problems inherent in putting the belts on the Roadies, but this was the time to do it regardless.  ***1/2

6.  Dusty Rhodes pinned Lex Luger to win the US title in a cage at 16:17.  Dusty was not over to the degree he likely expected here, and the match was terrible.  This match did finally solve the great Luger/Lugar controversy, since Lex wore a robe that spelled it “Lex Luger” and he presumably knows how to spell his own name.  (Now if only Mike Rotunda could have worn a robe with his own name on it…)  Dusty did a dropkick at 10:00 to fulfil his one-per-year quota.  At one point Luger tried to get him up for the torture rack, and although kayfabe they weigh the same (!!!) it was “like watching an ant trying to lift a watermelon”.  The first 14:00 were a disaster but the finish was tremendous, with all signs pointing towards Lex getting the chair from Dillon and cheating to win before Dusty pulled triumph from the jaws of defeat, like Dusty finding a bucket of KFC at the salad bar.  (That one’s a Scott Original, by the way.) Dave gives it * for the finish, but acknowledges that everyone else thought it was well into negative stars.

7.  Ric Flair pinned Ron Garvin to regain the NWA World title in 17:35.  Garvin was heavily booed, and they did all the scratching and hard chops but it was the worst Flair match in years.  Dave doesn’t understand why they basically repeated the Detroit match, which everyone already saw on free TV.  **1/2

For those wondering, New Orleans drew 1600 for the closed circuit showing, with the following thrilling bonus matches live in the arena as a warmup:

2.  Ron Simmons pinned Johnny Ace with a flying shoulderblock in 4:00

4.  The Sheepherders beat the Lightning Express by DQ in 5:30 in a regular tag match that was supposed to be a cage match, but they forgot the cage.  Further, it was advertised as the New Breed challenging the Sheepherders, but Chris Champion no-showed, so fans were double pissed.  Finally, they advertised an hour of matches leading up to the closed circuit showing of Starrcade, but you’ll note that the times add up to about 20 minutes, so they just had a 30 minute intermission before the show instead.  Dave doesn’t have a report from Greensboro, but thankfully the internet does:

– On the bright side, they managed to draw 11,000 to Nassau Coliseum the night before Starrcade and had a great show.

– To the AWA, where they held their Thanksgiving show and apparently Greg Gagne is the new World champion.  Larry Hennig tried to interfere, but Verne ran in and hit Curt with a roll of coins and put Greg on top for the apparent pin.  Dave thinks it’ll be reversed soon.

– As a followup to the story about the AWA’s San Jose show having an advance of 12 people, things picked up significantly for them, and they TRIPLED their advance, falling JUST a little short of a sellout.  With, you know, 50 people. – Actually to be fair and impartial about it, Dave specifically notes it was “less than 50 people”.

– Oh, also, WWF is taking over the AWA’s TV time in Denver and kicking them out of the city.  So there’s some more salt in the wound.

– Rip Oliver gave up his dream of being a WWF superstar and returned to Pacific Northwest after all.

– Art Barr, son of Sandy and brother of Jesse (as Dave constantly reminds us) won his first title by capturing the PNW TV title in a battle royale.

– The American Ninja has already unmasked and it’s Brian Adams, who is actually American and you’ll never guess who he was trained by.  Go on, take a guess, you’ll never get it. 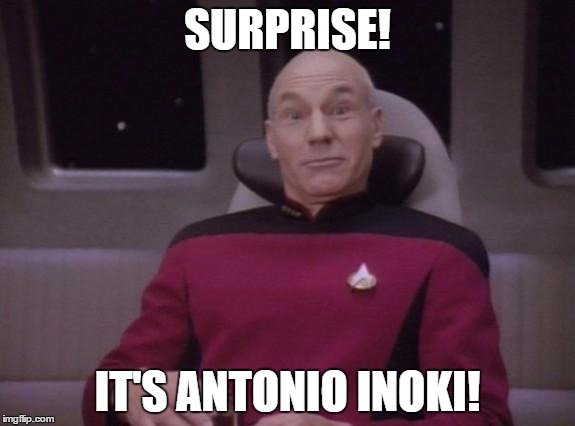 – Well, I mean, that actually IS somewhat surprising information, to be fair.

– Back to the AWA’s Thanksgiving show, as a pair of bodybuilders decided to rip off their shirts and rush the ring on Kevin Kelly & Nick Kiniski to show how tough they were.  Dave notes that thankfully security saved their lives because Kevin Kelly is not the gentleman you want to try that sort of thing with.

– In Stampede, Zodiac and Jason had their breakup and fans went NUTS for Jason’s babyface turn.  (In truth, there was a lot of Kane’s future character in Butch Moffat’s portrayal of Jason.)  This is a win-win because fans have been wanting Jason to turn for a while, and Stampede is top-heavy with heels anyway and someone had to turn.

– Dave notes that Jason v. Steve DiSalvo should be interesting, because DiSalvo worked with another guy under the Jason mask in Montreal and was so stiff with him that the poor guy was getting facial bruises THROUGH THE HOCKEY MASK.

– Dave goes off on a rant in the letters section about how badly Crockett bungled the UWF and Florida buyouts, making all the same points that would come up in 2001 when the same s--- happened again.

– No time for a Japan section this week, which is hilarious considering what went down at this point over there.

NEXT WEEK:  Dave goes on vacation, but returns on 12/21 with an epic TWENTY PAGE issue.  Oh, and S--- GOES DOWN in Japan.  You have been warned.