Well, it’s the (even more) calm before the storm of Thanksgiving, so this should probably be another slow, meme-free week of news.

– With a week left until the big showdown, the two groups have been taking shots at each other with various “read between the lines” comments and behavior, like Sam Houston using “Midnight Rider” as a theme song before going out and doing a squash job, and even Manny Fernandez going on Memphis TV and saying that Crockett’s show is “a team of mules being led by a jackass”.  Luckily for the NWA, Starrcade has sold out two weeks in advance and now they’re looking especially silly for not running in a bigger arena.  Also on the bright side, sort of, most people at home won’t actually have a choice of which show to watch and will pretty much be at the mercy of whichever cable company they have.

– Dave notes that he’s not going to speculate or give away the finish to Survivor Series, but keep in mind that the WWF has never done a big show before where the heel went over, but they’re gonna have to get to WM4 somehow and one wrong move could expose Andre as someone who can barely even be called an active pro wrestler and sink the show.

– For some reason, Crockett has been advertising Ivan Koloff v. Mighty Wilbur as a part of Starrcade, but it’s actually part of the live show on one of the closed circuit locations.  Dave thinks it’s kind of weirdly misleading to promote a match that’s only being shown in one specific city.

– In the New Japan tag team tournament, Inoki lost longtime partner Fujiwara to an injury angle, so he went out and found a new partner.  Guess who he picked.  You’ll never guess. 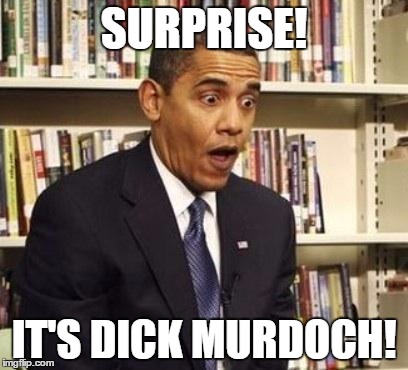 – Wait, no, that’s not how this Inoki gag is supposed to work.  Now I’m all confused.  Plus I can’t see Obama getting along with Murdoch very well.

– Anyway, the finals are likely going to be Inoki & Murdoch v. Saito & Choshu, which should draw a shitload of money.  Choshu, meanwhile, actually did a high profile job to Kimura & Fujinami in the tournament, which was the first time he had lost in a very long time.

– The WWF taped the next SNME show in Seattle on 11/11, and it doesn’t sound like such a hot show. Although Randy Savage v. Bret Hart was said to be an excellent match.  The main event saw Hogan lose to Bundy by countout, which is the first time Hogan has ever been beaten on national TV, making it a double crazy week when both Hogan and Choshu do jobs.

– Dave went to an NWA show in San Fran, which drew a disappointing 2000 people, which was double disappointing because they hadn’t been there in four months and both Flair and the Roadies were on the card.  (Meanwhile, WWE hasn’t even had a house show here in Saskatoon since 2011 and it doesn’t seem like that’s going to change any time soon.)

– Dave thinks Ron Simmons should have been much more improved from where he was when he started, and he kind of stunk up the joint against Black Bart.  He’s doubting that he’ll be a future superstar at this rate.

– Dave gets a funny shot in, noting that the Western States Heritage title sounds like it should be contested in a golf tournament.

– Steve Williams worked with Dory Funk in order to get him some valuable learning time, and that match stunk up the joint as well.

– They’re not coming back until after the Bunkhouse Stampede series wraps up, which notes is appropriate because Frisco is the one market left in the US where a battle royale still draws so of course they’re not running there.

– Although there’s lot of grumbling from talent in the NWA about leaving after Starrcade due to poor houses lately, the real concern has become the plummeting TV ratings.  Like, literally as soon as Garvin won the title, their syndicated package dropped out of the top 15 completely and now is behind AWA and even David McLane’s freakshow.  That is what making Ron Garvin champion does to your product!  Basically Crockett bought the UWF specifically to boost syndicated programming, and now a whole lot of stations are about to drop him completely.  You can make a variety of excuses for house shows being up and down (and promoters do) but if your TV ratings suddenly drop from #4 to #16 or lower, it means that people are not enjoying your product.  (Or it could mean it’s football season or the Olympics are on!)  Dave’s biggest fear is that they look at the gates for Starrcade and Nassau and Crockett will be all…

– Of course, Dave notes, it could always be worse, and you could always be the AWA right now.  They’re cutting shows like crazy and guys who aren’t on guaranteed deals can’t make enough to survive until Christmas.  Tons of guys are gone already, starting with Tommy Rich and Jerry Blackwell, and many others are question marks.

– For those wondering, Dave’s local cable is showing Starrcade, so he’ll watch that at 2pm and then drive to another city to watch Survivor Series at night.  (Now that’s a REAL fan!)

– In World Class, the “Von Erichs Over America” tour debuted in Birmingham with a robust 300 fans drawing $4000, so Bum Bright is probably bummed about that one.  On the bright side (see what I did there?) the wrestlers are at least paid a guarantee by Bright’s millions of dollars, so they’re perfectly content to play in front of a crowd smaller than most nightclubs.

– Ted Arcidi left the promotion in late October, so they did yet another fictitious title change and put the Texas title on Matt Borne.

– In Memphis, The Snowman is back and getting another push, because his son Xavier is a major football star in high school and in all the papers.  (OK, seriously, what’s with southern states and high school sports?  Why is this a thing?)

– The latest POWW card drew 850 to Marietta, GA, although none of the girls were actually advertised in the promotional materials.  (McLane was ahead of his time, I guess, since that’s how WWE does it now.)

– Kamala is sitting out his WWF contract until December, at which point he’ll likely show up in World Class.

– NWA drew another disappointing 3800 to the Omni on 11/8, and it was supposed to be headlined by Flair v. Ron Garvin in a non-title match, but instead ended up being Garvin and Flair each separately squashing a pair of jobbers in handicap matches as a “Starrcade warm up”.  Fans reportedly were “hissing” at Garvin.  (Like snake people?)

– Billy Jack Haynes collapsed after a match in the Nassau Coliseum on 11/6, which turned out to be potassium deficiency and dehydration.  (You have to wonder if that was covering up something else.)

– In Portland, the Super Ninja has introduced a big guy called The American Ninja as his bodyguard, and he’s billed at 6’8” and 310 pounds.  (And yes, the American Ninja became famous later, although he’s far from 6’8” or 310 pounds.  Yes, this is the Wrestling Observer Debut of Bryan Adams, aka Crush.)

– Interesting note in the letters pages, as it turns out that Rose & Condrey can be the Midnight Express because the NWA forgot to trademark the name, so it’s actually public domain.  (I guess that explains why Bart Gunn and Bob Holly could use it as well.)

– Another minor funny note to tech geeks like me is a letter where the Crockett buyout of the UWF is compared to GE buying RCA and how it’s not really an apt analogy.  In fact, GE destroyed RCA in exactly the same way the UWF got destroyed, as they quickly pieced out the rights to the RCA electronics trademark to a bunch of very cheaply made subsidiaries, who quickly turned the brand into a low-end budget line.

– And finally, John Nord is getting over big as a babyface in his car commercials in Minnesota, piledriving dudes on top of cars as a part of the gag.  He’s basically doing Jim Duggan doing Bruiser Brody and it’s an entertaining act.

Well you know we can’t just let THAT one go without a YouTube visit.