The news remains slow until next issue, when a couple of major bombshells hit, but for now there’s tons of news ITEMS at least…

– The NWA is dark for the week due to a San Martine vacation getaway, so not much from there.

– Jim Duggan returned to the WWF at the TV tapings on 9/15 and 9/16, and the strategy is for him to play the exact same character and the announcers to pretend that he never left and just act like he’s been there the whole time in the background or something.

– Kamala has apparently been fired or suspended or something, Dave isn’t sure which.  Originally Kamala was supposed to be facing Hulk Hogan on SNME and doing the big boot and legdrop job, brother, but now it’s Sika who gets the honors instead.  (And I’m sure he quite happily took that payday.) Dave also expects something big to happen in the Randy Savage v. Honky Tonk match.

– The WWF has announced the main event for the “Survivor’s Series” and it’s just a 10 man elimination match with Hogan/Bam Bam/Patera/Superstar/Orndorff v. Andre/Gang/Bundy/Rude/Reed.  They made sure to book the show for exactly the same time as Starrcade 87 so people can’t order both, and it’s looking like cable systems are already picking the WWF in this one.  (Question:  Why couldn’t Crockett just move Starrcade up a few hours and run an afternoon show instead?  Then people could get both shows quite comfortably.)

– Richard Belzer filed suit against Hulk Hogan for $5 million for the incident on his talk show in 1985 where Hogan demonstrated a front facelock on him and knocked him out cold with it, smashing Belzer’s head on the stage in the process.  (Total dick move from Hogan.  Belzer might have been acting like an ass, but you don’t assault someone who isn’t even trained like that.  The least he could have done is caught him and lowered him to the ground instead of letting him drop.)

– Chris Adams and 2/3 of the Freebirds quit the UWF this week, with Adams leaving over money and Buddy Roberts leaving to go work Wild West Wrestling for Ken Mantell.  (Talk about hitching your horse to the wrong wagon.) Terry Gordy will hopefully get his knee fixed and then he can go make millions in Japan for the next while.  Hayes will be joining the Crockett main roster and forming a tag team with Jimmy Garvin.

– Dave runs down the WWF TV tapings, including the debate between Elizabeth and Jimmy Hart over who’s the greatest Intercontinental champion of all-time.  The next night had not much going on, aside from Dibiase bribing some kid to do 30 pushups and then not paying him his money, which led to Jim Duggan beating up Dibiase and stealing the cash on his behalf. (If he was using the 2×4, doesn’t that technically make it armed robbery?  Jesus, Steven Avery remains locked up while this maniac drug dealing robber runs around free.)

– Jake Roberts will be absent for the next 12 weeks due to those drug tests we talked about a few weeks back.  He was supposed to be programmed with Danny Davis but that’s out the window now, and Ricky Steamboat has been called up to replace Jake on a few shows again.

– Over to Crockett, where Warlord is now in as a heel with Paul Jones.

– They’re really pushing the Detroit show on 9/25 for some reason.

– Iron Sheik debuted for World Class, but Dave is pretty sure that he can’t be Iron Sheik due to Titan copyright lawyers, and instead he’ll be Ali Vaziri.

– Dave steals a funny from another newsletter, and I think this warrants a meme.

– Dave then EXPLAINS THE JOKE to kill the whole thing dead.

– Anyway, while we’re in World Class, it’s time to debut a new feature that I’m very excited about!  I’ve been workshopping it around a few places and working out the kinks, and hopefully it’ll fly. 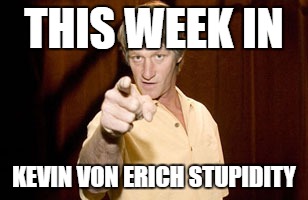 – So Kevin has been feuding with Brian Adias for months over the “Oriental Tool” thumb to the throat that is supposedly deadly, and Kevin hates Adias so much that he wants to break his thumbs so he can’t do the move anymore.  So he goes on World Class TV and says, quoting here, “I promise you fans I’m going to run Chris Adams out of Texas and I’m going to break Chris Adams’ thumb!”  Now, this sort of thing had actually happened before, as they shot an interview a few weeks prior where Kevin kept calling Adias “Michael Hayes” until they finally just stopped the interview and scrapped the tape, but this not only happened, but MADE THE TV SHOW!

– The Florida TV show that aired on the weekend finished with the word “Finis” on the screen, so that appears to be the end of the CWF as things stand.

– Sadly, the WHEEL OF TORTURE is not turning Memphis around, as crowds were poor for both shows featuring the gimmick.

– Dave goes on a rant in the Memphis section about too many titles and how Jim Crockett and his ridiculous shows where literally every match is for a title are just killing all the titles off.  (That’s still a major bug up his ass even today.)

– The Ric Flair v. Ron Garvin matches have been such hell on Flair’s chest that he’s current working with four burst blood vessels and “so much dead skin around his chest that you wouldn’t believe it.”

– They’re currently hinting at a Flair v. Dr. Death match to unify the belts on TV.  (Which would never happen, of course.)

– Andre’s movie is coming out in the fall.  Dave Meltzer, crack movie journalist:  “Andre is the sixth lead in the flick called Prince’s something or other.”

– An indy show in London, ON, featured not only Scott Rexsteiner, but the greatest gimmick ever no-sold by Dave Meltzer:  THE MANDINGO WARRIOR.  “it’s certainly original” is Dave’s take on it.  (Jesus Christ, the pitcher just lobbed a friggin’ hanging curveball right at him there and he let it go by.  COME ON! It’s not only ripping off a slightly more popular gimmick, it’s a clever bit of wordplay AND it’s completely racist!  It’s like the trifecta of bad indy gimmick awesomeness!  It’s like something you’d get as a punchline on @Midnight!)

– Scott Hudson writes in again, and he’s casting his vote for Paul E. Dangerously as manager of the year and jumping on the bandwagon early so he can tell everyone that he told them so.  Good call, Scott.

– Another common thread in the letters page:  People in disbelief that Crockett would actually try to run a Starrcade main event of Flair v. Ron Garvin.

– To Stampede, where Dave reveals that Bob Orton Sr. actually used the Masked Zodiac gimmick in California in the early 70s.

– And finally Corporal Kirschner, fresh off getting fired by the WWF, is into Stampede now.  (Good GOD was that a flop, as they “promoted” him to Colonel Kirschner to avoid copyright problems, and then he flopped hard with the Calgary fans who saw him as a WWF job guy.)

NEXT WEEK:  Some shit goes DOWN, as the slow news period comes to an end!