There continues to be not much going on in the wrestling world until pretty much everything explodes in about two weeks.

Quite the teaser, I know!

– The top story sees Gordon Solie booted out of Florida Championship Wrestling because of a money dispute with Crockett, replaced by Steve Keirn.  Basically it was a cost-cutting move, since they cancelled one of the Florida TV shows and were going to run 2 tapings every two weeks.  Solie felt that he should be paid for all 52 TV shows taped, whereas Crockett wanted to pay him for the actual tapings only, so Solie is gone.

– The Road Warriors were scheduled for a meeting with Vince this week, but everything else is pure speculation.

– Dave went to the Crockett house shows in California this week, and although they were good overall, there’s no NWA TV in the state to speak of, so they didn’t really draw.  Ricky Morton no-showed for unexplained reasons, and Sting took his place instead with Robert Gibson.  Apparently there’s some bad blood between Chris Adams and Terry Taylor in real life, because Adams was very pointedly aiming his stomps and kicks to Taylor’s gut in their matches.  Ricky Morton did appear for the last show in San Jose, but the crowd viciously turned on him against the Horsemen. 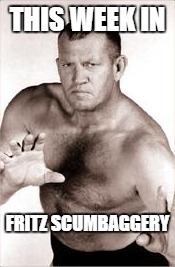 – Is that a word?  I think so.  Anyway, Fritz Von Erich has now decided to sue the doctors who worked on Mike Von Erich’s shoulder, claiming that the operation that gave him Toxic Shock Syndrome messed up his wrestling career beyond repair and drove him to suicide.  Now, Dave is no lawyer, but he’s pretty sure that it was FRITZ who declared that Mike was well enough to wrestle and then pressured him into getting into the ring again when he was still half-dead.

– Ron Garvin got sued by a fan in West Virginia, who claimed that Ron headbutted him in 1983 during a match against the Midnight Express (who didn’t exist as a team until 1985 in the NWA), and since Ron failed to answer the charges or appear in court, the “victim” was awarded $455,000 in damages.  They haven’t been able to find Garvin to get him to pay up, sadly.

– Dave has decided on a one-month moratorium on nicknames while the votes are counted.

– To the WWF, where Ken Patera is back working shows again with a huge sling on his arm following surgery, and acting as a second for Superstar Graham.  Somehow Graham is even worse than Patera.

– They ran into a problem with Ted Dibiase, because the Million Dollar Man act is already so over that he was getting thunderous babyface reactions at TV tapings, and you can likely guess who was feeling threatened by that.  Originally he was throwing money at the crowd to show his wealth, but since this makes people like him, they’ve tweaked the act so that now he brings audience members into the ring and humiliates them for cash.  The new act appears to be working.

– Jealousy continues to fester, however, since Dibiase takes limos everywhere and stays in the penthouse suite on Vince’s dime in order to sell the character.

– Mr. T continues to actively hurt attendance around the horn in his role as the supposed big attraction.

– MARK DAVE’S WORDS:  Rick Rude will not get over in the WWF because he’s too skinny and great abs alone won’t sell the idiot marks on his physique.

– MARK DAVE’S WORDS AGAIN:  The Superstar Graham push will be short-lived because all the sympathy heat from his hip surgery will die off quickly.  (That one at least he was right.)

– Titan has BANNED THE BLADE, due to fear of AIDS, and there will likely be testing in the future.  (Real talk:  AIDS is not the problem, since the HIV virus dies outside of the body.  The real issue is Hep C, although obviously we didn’t know that in the 80s.)

– Dynamite Kid has been given two months off to see if he can rehab his back through resting it.

– To the UWF, where racial sensitivity takes another bold step forward with the debut of Tiger Conway Jr and Shaska Whatley as the Jive Tones.

– A newcomer to Stampede is the MASKED ZODIAC.  Dave offers no further info, so I give you the magic of Barry Orton via the YouTubes:

– To World Class, where Bill Mercer went on vacation and the commentary on the TV show was handled by a local preacher who “makes Mercer sound like Vin Scully.”  So it can always be worse, just remember.

– The Fantastics have been fired so that Simpsons can get an even bigger push.

– Brian Adias revealed the ninja who taught him the ORIENTAL PUNCH this week, and it turns out to be Jimmy Bush, a local guy from San Antonio who can’t even be bothered to disguise his Texas accent under the mask.

– Dave brings the compliments about Lance Von Erich in his review of the Wild West TV show:  He didn’t trip once in the 90 seconds that he wrestled this week.

– David McLane, ever the optimist, has booked the football stadium in Philly for a show on 9/1, which Dave charitably describes as suicide.

– The first SNME of the new season will be taped on 9/23, with a main event of Honky Tonk Man v. Randy Savage.

– And finally, Kerry Von Erich will indeed return to the ring in 10 weeks.

Pretty light this week, with mostly ring results filling up the issue.