The March to Wrestlemania continues within!

– It’s COLD WAR in Toronto.  (My joke, not Dave’s) In freezing temperatures, Crockett had his showdown with Vince, featuring the debut of the NWA in Hamilton taking on Roddy Piper’s Canadian farewell in Toronto.  The WWF drew 16000 and Crockett drew 3000, so point to Vince on that one.  According to Dave’s minions, there was confusion about whether the NWA show would even take place, and coupled with a frigid evening of –4F everyone just decided to stay home.

– Those who DID show up were strong heel fans, chanting for the Horsemen all night (It’s BIZARROWORLD!) but in what today would be deemed a shocking turn of events, the babyfaces actually WENT WITH IT and Dusty Rhodes played a complete heel against Tully while Nikita heeled it up against Ric Flair, who was by far the biggest babyface of the show.  (And I bet Dusty had a ball playing a bad guy again.)

– The WWF show was mostly unremarkable, although they did announce the familiar-sounding Frank Tunney Memorial Tag team tournament for 3/15.  Dave notes that we’ll just have to rewrite those darn history books again, because now the story is that Tunney imported tag team wrestling from Australia. This fits well with Jess McMahon inventing pro wrestling in 1920, Dave concludes.  The idea is that 8 teams do a one-night tournament with the winners getting a shot at the Hart Foundation in the main event.

– Dave lists all the big shows upcoming, and suggests that the David Von Erich Memorial show in May should be moved from the stadium to a phone booth to prevent further embarrassment.

– Dave actually watched a WWF TV show for the first time in a while, and it was scary effective in building up Hogan v. Andre as a big deal.  He thinks it’ll be a bigger deal than either of the first two shows, in fact, although it’s mostly just a one-match show.  Dave runs down the card and he’s still 100% convinced that the Can-Am Connection is getting the belts from the Hart Foundation the week after the show.

– The WWF is obsessed with selling out the show, although as of this writing there’s about 17,000 tickets sold and Dave expects another 40,000 once the Andre-Hogan angle airs on TV.

– Two weeks after WM, Crockett presents the 87 Crockett Cup, featuring a pretty good field of teams and Barry Windham v. Ric Flair on top.  Dave is concerned that they’re apparently flying in Baba & Wajima to represent Japan, since they’re pretty much the worst team in the world at the moment.  (Worse than Lance Von Erich & Dingo Warrior?)

– The UWF will also be running a show at the Superdome the same night as the Crockett Cup, although there’s no details yet about what to expect for it.

– The Missing Link’s sons are apparently working for Watts as jobbers.  (According to my extensive research on the subject, that would be Jason and Mark Sterling, neither of whom lasted very long in the sport.)

– To Crockett, where apparently the Midnight Express won the US tag titles from Garvin & Windham on 2/14, which in turn leads to Jimmy Garvin turning babyface and teaming with his “brother” Ronnie moving forward.  (This was in fact incorrect.  The title switch, not the Garvin turn.)

– Speaking of turns, Dick Murdoch turned on Dusty Rhodes (after previously turning on the Baron) and now he’s super-duper heel.  Basically the Petrov thing has been such a spectacular flop that they decided to stick Murdoch with Ivan instead as a team and then hope that he would rub off on Petrov.  However, as Dave notes, Murdoch is super when he’s “on”, but when he’s “off”, he’s one of the worst to watch and there’s rarely any middle ground with him.

– For those of you losing sleep, they did finally pay off the Big Red Machine gimmick by sticking a local jobber in the outfit for the six-man match with the Russians where Murdoch turned on Dusty.  It was no one of note.

– Stan Lane will be coming in as a heel.  (Oh, he’ll be doing much more than that, Dave!)  Mike Rotundo, who is doing nothing but jobs in the WWF at the moment, will be finishing up there and coming in as a babyface.

– The latest info is that Crockett may not bother establishing an office in Tennessee after all, and will just tour through the area every month or two instead, leaving Bob Geigel to do what he wishes with the former Central States territory.  Bill Dundee, who was supposed to be booking the “new” territory out of Nashville, is sick of dealing with the job and wants to lose the Central States title immediately and just go back to Memphis.

– The Supertowns special was a flop in the ratings and in reader feedback, as apparently Dave’s rather savage review was thought to be letting them off EASY.

– To the WWF, where Hercules is doing matches against Hogan and drawing pretty big, although Savage v. Steamboat is underneath.

– JYD has been reluctantly doing jobs for Race, with a wacky finish where he gets a small package for two and then Harley reverses it for the third count to win.  (That was actually close to the way that Honky won the IC title from Steamboat a few months hence.)

– The Hogan series with Kamala is back to DQ finishes again, this time with Kim Chee coming in for the DQ, only to be unmasked by Hogan as Paul Orndorff.  His shoulder is still wrecked, however.

– In the “What’s good for the goose…” file, in order to run the Silverdome for Wrestlemania, the WWF had to pay Joe Louis arena $50,000 to break their exclusive contract, because the exclusivity works both ways.

– Ken Resnick appears to have been removed from WWF TV, although the company is claiming he’s not fired.  (Pretty sure he was fired.)

– To World Class, where Gary Hart is bringing in a rookie bodyguard named Jeep Swenson.

– Kerry Von Erich won’t be back in the ring until October, because “he still has no feeling in his bad foot.” 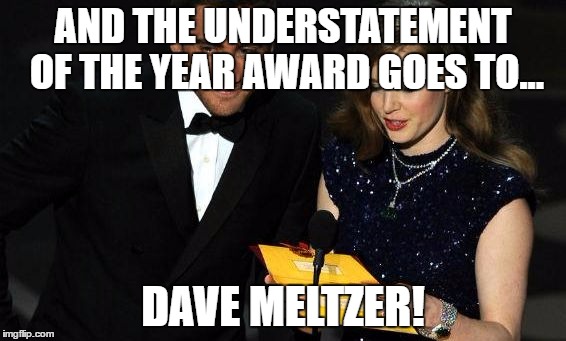 – I almost feel like we should stop the recap right there because I’ll never top that one, but let’s soldier on!

– Jim Crockett has been showing interest in hiring Lance Russell away from Memphis because the popularity of the TV show is one of the highest in the country for wrestling, and Crockett wants to split up the announce team there before rolling into Memphis to destroy them.

– In the AWA, they’re going head-to-head with Vince on 3/1 and not even putting up a fight, headlining with Curt Hennig v. Buddy Rose on top against Hogan v. Hercules in a chain match.

– To Florida, where Steve Armstrong & Tracy Smothers have formed a tag team called “The Southern Boys”.

– Also, former “wrestling mag writer Paul Heyman”, who is working as manager “Paulie Dangerously”, brought in a big goof named Tombstone.  Dave thinks it’s Big Mike Moore.  (That would be way too early for 911, who was also known as Tombstone later, I’d assume?)

– A promotion in South America is trying the gimmick of “The Invisible Man”, where a guy has to sell moves for a pretend wrestler.  Kind of like Ric Flair v. Mike Von Erich, notes Dave.

– Eddie Sharkey is training a former bouncer named Tom Ferreira, who apparently beat the crap out of Billy Robinson and Pedro Morales in a bar fight at the same time.  (Don’t think we ever actually saw him.)

– The WWF did TV tapings and the Piper-Adonis match will now be hair v. hair.  Dynamite Kid was there to make the challenge for the six-man tag, but he wasn’t wrestling at all and was moving very gingerly.  The hair match was set up by another six-man tag, with the Dream Team and Adonis teaming up, where Adrian accidentally cut off some of Beefcake’s hair (In an angle that ended up drastically changing the career of Mr. Beefcake)

– Lex Luger is improving rapidly in Crockett’s territory, and he could be a big name in the future.

– And finally, powerlifter Doug Furnas is in training to be a wrestler, and will be starting soon in Alabama.

SEE YOU NEXT WEEK.