OK, so I guess suicide and depression discussions are a bit dark for this column.  Duly noted, we’ll keep it light from now on.  We’re pretty much smooth sailing for major deaths until 1987 anyway.

– The news of the week is that the Great American Bash tour starts and Crockett is probably going to be disappointed in his gates because he’s shooting too high with the stadium shows. Plus tickets are ridiculously expensive at $20 and $50.  Not to mention he’s doing a stadium show in Memphis on 7/4, and Jerry Lawler is running his own show in opposition, in a baseball stadium, with FREE admission.  Dave says that yeah, it sounds stupid on the face of it, but the moral victory of getting thousands of people into the stands can’t be overestimated.  And then parading merchandise at them for three hours means that you’ll still be making some pretty good coin.

– So the IWGP tournament ended up cursed yet again, although Inoki still won to no one’s surprise.  Apparently the first year of the tournament saw Frank Tunney and Vince Sr. dying soon after getting flown in for the tournament, and then famously Hulk Hogan won the tournament by countout over Inoki after accidentally knocking him off the apron and causing him to swallow his own tongue.  So this year, Inoki won the A block by submitting Andre the Giant (something that no one had ever done or ever did again) and Dick Murdoch won the B block because Fujinami (the intended winner) suffered a concussion against Maeda the night before and they didn’t want to have Maeda jobbing to Inoki so soon into the program.  So it ended up as the bizarre finals of Inoki v. Murdoch, which Inoki of course won.

– The WWF has purchased the rights to the Machines gimmick from New Japan to be used for Bill Eadie and Andre the Giant.  Dave wonders if it’ll be anything like the old gimmick where Andre gets suspended for nothing in particular and Bobby Heenan manages to get the WWF to ban him for life if he’s found to be competing under the mask and so they make Bobby’s life hell.  In fact, that was the exact gimmick to the letter.

– George Scott has been removed from his position as booker of the WWF, and he’ll be sent down to the agent minor leagues with guys like Jerry Brisco and all the rest on the payroll who have no input.  Apparently Vince himself will be taking over, with help from Hulk possibly.  Kind of funny to remember a time when Vince wasn’t completely hands-on with every aspect of the business and actually needed someone to “book”.

– Blackjack Mulligan found a new way to get fired, beating up referee Rick Hazzard in World Class over a dispute in the dressing room.  This wasn’t actually what got him fired, but it led to another confrontation later in the week, when Mulligan refused to work a match against Kevin Von Erich due to Kevin’s stiffness and a cracked sternum that Mulligan didn’t want to re-injure.  So they argued and Mulligan apparently put the boots to Kevin and THAT’S what got him fired.  And then booker David Manning nearly got fired by Fritz because he should have fired Mulligan after the FIRST incident and thus prevented Kevin from getting beaten.  And of course they had been building the whole TV show around Mulligan leading up to this.

– Showtime is airing Wrestlemania II in its entirety on 7/5.  I’ve always thought pay TV showing PPVs on a month delay or so was an idea that could have worked great but never really got explored.  In fact, I think one of the premium movie channels up here used to show Wrestlemania as a part of their selection in the 80s (either First Choice or Superchannel), but that was a long time ago and I could be wrong.

– John Studd was given a part in the new Stallone movie Over the Top, about arm-wrestling.  He’ll be playing the final villain character in a role that was written for Bruiser Brody.  Brody actually turned it down because the producers wanted the wrestlers involved to take the summer off for filming, and Dave notes that this is perfect for Studd because “I don’t think anyone will even notice he’s gone”.

– The WWF continues to hit record lows in attendance in cities where they come back a lot, whereas cities where they’re still a new thing draw just fine, and if it’s a combination of Hogan and a new city, they’re drawing great.  So the solution seems to be continuing to only use Hogan in small doses to pop big houses.

– The AWA did their first ESPN taping in the Bay Area, and Dave attended, and wished he hadn’t.  Sadly this wouldn’t be the worst AWA TV taping poor Dave would have to sit through.

– Antonio Inoki is now fishing for a match against either Michael Spinks or Larry Holmes in Japan.

– Dave thinks that his wrestling encyclopedia will be done in about 4-5 weeks, basically a 175 page issue of the Observer.  God help us all if that actually happened, I can only imagine the run-on sentences and scribbled-over typos that would result.  At any rate, it didn’t happen.

– Onto Crockett, where Dave is pretty sure these stadium shows are gonna bomb.  Not to mention that the big selling point is stuff like a David Allen Coe concert in Philly.  Just because Dusty likes s--- like that, Dave notes, doesn’t mean wrestling fans do.  If only WWE would have learned that lesson for all their “special Wrestlemania guests” like Kid Rock or whoever the people at 30 were.

– Speaking of not learning lessons, Crockett is running St. Louis with b------- like Baby Doll wrestling in a six-man against Cornette, and Dave notes that this isn’t gonna fly with that crowd.  There’s a reason that both Crockett and the WWF already died a miserable death in that city, because they don’t understand the audience and yet Crockett keeps pushing the same nonsense for the thousandth time, drawing less each time.  As another case in point, the original main event was to be Flair v. Brody, but Crockett didn’t want to use any outside guys on his shows and now it’s Flair v. Dusty instead, which will die.  It actually ended up drawing 6000 people, but that was the show where Flair regained the title from Dusty, too.

– In the WWF, Hogan debuted at the Tacoma Dome and drew 21,000 against King Kong Bundy.  That’s pretty phenomenal, notes Dave.

– Bob Orton has been sent on a tour of Australia to keep him out of the country for legal reasons.

– Hillbilly Jim has apparently quit the WWF after being made to work 70 straight nights, and he got sick of it and went home.  Obviously he’d return right away.

– Adrian Adonis has been wrestling with a veil over his face because he made the mistake of trying his tough-guy act with Danny Spivey backstage and got his lights turned out as a result.

– The WWF is doing a one-night tournament in Foxboro, an outdoor show that will see Roddy Piper return (which should quell retirement rumors for the moment), but no Hogan.  It’s a 14-man tournament (with Hercules and Rotundo randomly getting a first-round bye), although the King of the Ring aspect isn’t mentioned yet.

– Speaking of Harley Race, here’s your “what could have been” moment for the week.  Originally Race was given the Jimmy Jack Funk gimmick, where he’d dress in leather chaps like the Lone Ranger and carry the noose with him as “Hangman” Harley Race.  Race declined, politely I’m sure, and the gear went to Jesse Barr instead.  I dunno, aside from the Lone Ranger mask Race as a grizzled lawman like Clint Eastwood in Unforgiven is…not a terrible idea, all in all.  I could actually buy that one.

– The WWF ran Angelo Mosca out of Ontario for good, enticing the Copps Coliseum in Hamilton to sign an exclusive lease in exchange for Wrestlemania III next year.  Well, we all remember the legendary Wrestlemania III from Hamilton, Ontario, right?

– Also, WM3 has indeed been moved up to March 29, where we all remember it.

– The WWF is hitting up conventions recently, and…hold on… 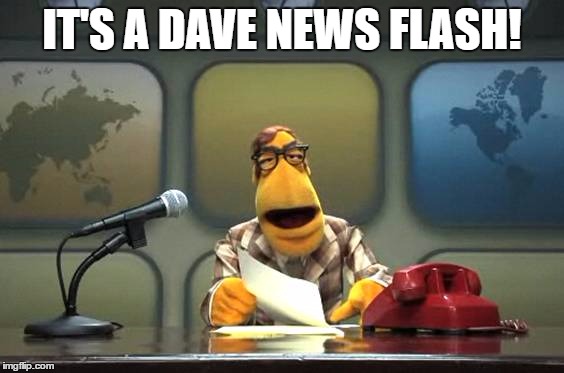 – NICK BOCKWINKEL IS THE NEW AWA WORLD CHAMPION.  Dave’s caps, not mine.  Apparently Stan Hansen was supposed to defend against him at a Wrestlerock card in Denver, and then decided that nope, it wasn’t gonna happen and instead he was gonna walk out of the show and not return.  So Stanley Blackburn declared Nick the winner by forfeit and gave him the belt.  That’s all Dave knows for now.  It would get juicier, fear not.

– This apparently leaves Nord the Barbarian as the top challenger, so Dave hopes he gets better in a HURRY.

– Verne still wants to sell and can’t find any takers inside the business, so now he’s looking for suckers outside of the business.  This gets more and more TNA-like every week.

– Scott Hall has been no-showing.  I think that might be the end of his AWA run.

– Scott Irwin, after discovering the inoperable brain tumor, was given a year to live by doctors and has started chemotherapy.  In fact, he lived a bit more than a year.

– To the UWF, where Steve Borden is getting…better?  What voodoo is this?  Dave wishes he could say the same for his partner.

– Dave thinks the Bill Watts comeback stuff is fantastic, but he’s saddened because although it’s improving business, if it was 1983 they would selling out arenas up and down the country and now everyone is just kind of flat.

– Back to World Class, where Dave continues burying Rick Rude, “the World champion of two cities”, who constantly loses non-title matches to Chris Adams.  He’ll defend against Adams on the big show 7/4 where he’ll lose it.

– And finally, Dave just runs down some random Japanese results and apologizes for not getting to the other territories because of all the headlines this week.

See, there we go, much happier this week.