With the WWF stuff wrapped up for the moment, let’s hit the territories.

– Southwest Championship Wrestling continues to fall apart at the seams, as this time they have brought in a new heel manager, who is actually named The Manager.  I know people complain about Creative now, but MAN.  The promotion is actually going to be dead by the time that the April issue comes out, to the shock of no one.

– Over to World Class, where Chris Adams broke up with Gary Hart and will form a permanent tag team with Gino Hernandez.  I’m up to the point in Gary’s book now where Gino dies (sorry, spoiler alert) and it’s heartbreaking stuff, as you can imagine.  Dave puts Adams over like crazy as one of the best workers in the world right now, which he was, up until the whole unpleasantness on the plane later on.

– Dave is confused by Michael Hayes seemingly turning babyface and teaming with Kevin Von Erich to take on the Dynamic Duo.  The Freebirds actually did really well as babyfaces in Texas for a while there.

– Fritz is finally starting to spread his promoting wings, and will be doing spot shows in Worcester, Mass and Anaheim, CA.  Both shows will likely be headlined by Flair v. Kerry.

– Jim Cornette is feuding with Sunshine and getting great lines at her expense about her loose moral background (“She’s got a mattress attached to her back and I see her on street corners every night”), but Sunshine will apparently have a mystery protege to feud with the Midnight Express.  Later in the update section we learn it’s Hercules.

– Dave is feeling better about the quality of World Class lately, as even Kerry’s interviews haven’t been as stupid as usual.  Dave draws the line at Mike Von Erich, however, as even his sense of humor has limits.

– In Mid-South, they now have a national TV outlet with the TBS show, which of course lasted about three weeks before they got kicked off again.  Dave runs down the results of the 1/30 tapings for the TBS show, which is a show that’s actually on the Network and I’ve reviewed!  In another strange Dave-ism, he uses the term “clean cut” when describing victories instead of just “clean”.  I’ve never really heard it called “clean cut” before as a wrestling term.

– Jim Duggan v. Ted Dibiase in a Tuxedo Street Fight loser leaves town match will headline the Superdome on 3/30, and “other stipulations possibly added as well”.  Yeah, ALL OF THEM.

– Edgar Thomas continues his initial push, as he beat Shawn Michaels for an NBC Sportsworld special that was taped 3/3 in Louisiana.  Thomas will be forming a team with Steve Williams, but I still don’t know what happened to him.  This kid Shawn, though, is the best rookie grappler that Dave has seen in a while.

– For the benefit of those who have trouble keeping their Barbarians and Tongans straight (like myself), Dave gives us a rundown:  The WWF Barbarian is Dave Barbie, a big musclehead.  The NWA Barbarian is John Fouvola, aka Tonga John, aka Konga the Barbarian.  The Mid South Barbarian is John Nord.  King Tonga from the AWA is an actual Tongan and has wrestled as Prince Tonga, King Kong Tonga and Tama Tonga.  There will be a quiz later.

– To the AWA, where it appears that The Tonga Kid (the one we all know and hate, Sam Fortoo) has moved to the AWA and will be challengin Larry Zbyszko for the Americas title on 3/23 in New Haven as a part of their continuing Northeast invasion.  They’re STILL running the shitty Martel v. Garvin title match on top, but now the Baron will be at ringside for Martel as Big Bertha Von Raschke, wearing a wig and falsies.  At least they’re trying, sez Dave.

– St. Louis is getting increasingly sad, as they keep going back to Flair v. Kerry on top because it’s all they’ve got, and the most recent show only drew 2600, the second lowest crowd since World War II.  This is another territory nearing the end as already the pattern of Vince destroying the territories has begun, and they wouldn’t even make it through the summer.

– In Memphis, the 3/4 show was headlined by Nick Bockwinkel defending the AWA title against Jerry Lawler.  “But Scott,” you’re probably saying, “Isn’t Rick Martel the champion?”  Yes, but see, Jerry Jarrett felt that Martel v. Lawler wouldn’t draw, so he made up a controversial title change in some fake city, and just started saying on TV that Bockwinkel was the champion pending some sort of hearing.  Dave notes this is “kind of shady”. 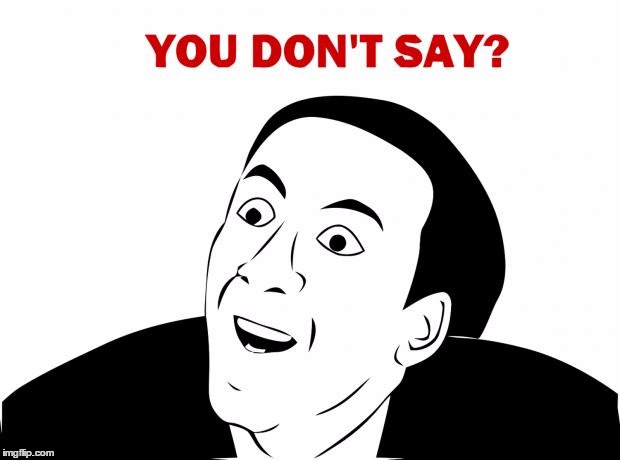 Come on, you knew that one was coming at some point.

– In the last ever Georgia update, Dave notes that the elimination of the group is complete and everything will be folded into the Jim Crockett promotion.  Good riddance to Ole.

– Over to Mid-Atlantic, which is about to become a much bigger deal, as Buddy Landell is coming in as “Nature Boy” and could be a huge draw against Flair if booked right.  Sure he could.

– Arn Anderson is also in, but they’re telling him to wrestle more like Ole and Gene, working the arm and grabbing holds, so that kind of sucks.  Still, the Ole v. Arn feud might be fun and draw a little.  Or, and this is a wacky idea, they could tease a feud and then go in a drastically different direction with it?  That might also draw a little.

– A newcomer in the Northwest promotion is Ricky Vaughn, who looks great but can’t wrestle a lick.  Yeah, he’s gonna annoy Dave even more dramatically very soon now.  The fact that Dave was talking about the imminent debut of “Lance Von Erich” a few issues ago, but Vaughn is still wrestling in Portland, would definitely indicate that Fritz was not planning this one out well in advance by any means.  It was probably like a Fake Ramon deal where they came up with the character and then found someone to play the part after the fact.

– OK, random updates to close it out.  The papers are reporting that OJ Simpson will be the ref for the “3/31 show”, but it’s actually Muhammad Ali.  Just call it Wrestlemania, Dave!  SAY CHOWDAH, FRENCHIE!

– Stampede re-launched on 2/15, but without the involvement of the Harts or the Bulldogs due to Vince’s soon-to-be-breached contract with Stu after the buyout and various family squabbles going on.

– Dave corrects a mistake from last issue, in that Eric Embry did not actually buy Southwest Championship Wrestling, as the deal fell through at the last minute.

– OK, so here we go without another huge story.  After months of sniffing around the WWF, NBC is ready to commit to a network show for Vince, running in the place of Saturday Night Live on off-weeks.  The shows will be co-produced by Vince and an unnamed NBC exec.  So we all know who the exec was and what the show was, and in fact this had a HUGE effect on the product, as NBC pumped money and expertise into somehow making the WWF product even MORE slick and fast-paced than it already was.  Without Saturday Night’s Main Event, they might have realistically kept pumping out s--- tapes like the Allentown or Poughkeepsie shows for years.

– Dave updates the Superdome lineup for Mid-South and we finally have the stips for the Duggan-Dibiase match in all their glory:  Loser leaves town cage match coal miner’s glove tuxedo street fight.

– More stuff with the WWF as they continue to explode.  Now it seems that there’s going to be a Saturday morning cartoon featuring Hulk Hogan and his friends.  Now, Dave makes an interesting point here about Wrestlemania, which kind of shoots down the main legend about the show before it even happens.  He notes that with the kind of money infusion that the WWF is getting from the one-two punch of deals with both CBS and NBC, even if the house show business tanks they’ll still have so much cash on hand that they can easily survive for years off the network TV deal alone.  So the idea that Wrestlemania was going to break the company if it failed is ridiculous, because just two weeks before that show they signed a pair of (likely) million dollar deals with major networks, PLUS the s--- that goes down with Crockett at the end of the month was worth another million.  They weren’t going anywhere, Wrestlemania or no Wrestlemania.

– Speculation is hot and heavy in Atlanta that Turner is about to dump WWF for breach of contract, and Dave says that now is the time to letter-bomb TBS and tell them what you want to see at 6:05 every Saturday.

– Dave has just learned that Liberace is going to be the guest timekeeper for that closed circuit show on 3/31.  This makes him happy, because it’ll negatively affect attendance.  “Where’s Dave Shultz when you need him?”  Is he saying what I think he’s saying there?

– So the March spectacular from Crockett that was supposed to be a supershow on par with that other closed circuit show on 3/31 looks less than spectacular.  Dubbed “Silver Star ‘85”, it’s a show in Greensboro on 3/16 featuring a main event of Flair v. Wahoo in a strap match and a loser-leaves-town cage match for the TV title between Tully and Dusty.  And you know what THAT one leads to, right?

– Gino Hernandez might be coming to the Carolinas shortly.  In fact, Gary Hart talks about that in his book, as he was trying to get Gino away from Texas desperately so that he could escape all the bad influences there, and in fact Crockett agreed to take Gino and Adams with Gary Hart as manager, but Gino wanted to stay in Texas and it destroyed him.

– The new Stampede Wrestling has already taken all but one of the WWF’s TV clearances in Western Canada, so this doesn’t seem to be a winning venture for Vince.

– Vince McMahon is apparently planning to sue Sgt. Slaughter for “stealing the character”.  Dave is already rolling his eyes at the testimony that we’re going to have to endure if this goes to trial.

– Dave provides piracy tapes for those planning on stealing the 3/31 closed circuit show signal:  The company that’s broadcasting it is called Video Techniques.  He’d ask for a tape himself, but he doesn’t really want to watch it.

– The story on Hillbilly’s gnarly leg injury is that he was running around the ring during a Hogan-Beefcake match and he slipped on a patch of water and broke his leg.  The company is crediting Beefcake with injuring him on TV, and Dave notes that they need to do SOMETHING to get people to take Beefcake seriously and this will do.

– Apparently there’s rumors that Smith & Kid will be back with the WWF soon as “The British Bulldogs”.  I think we can confirm that one.

– Butch Reed is headed for the AWA after his babyface run in Mid-South flopped.  Dave feels sorry for him.

– And finally, Dave finishes with a note that two years ago, Mr. T approached Verne Gagne with an idea very similar to what will happen on that closed circuit show on 3/31, and Verne turned him down because “wrestling doesn’t operate that way.”  And there’s your metaphor for the day.