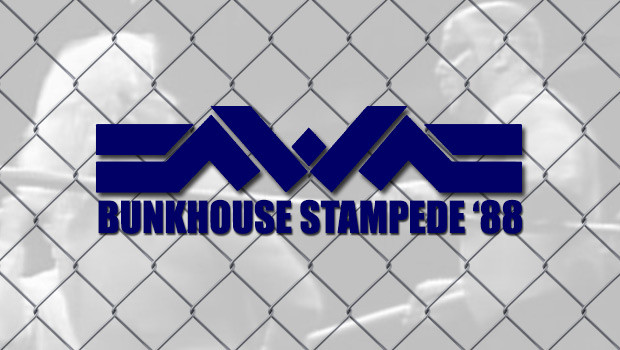 This was Jim Crockett Promotions’ second foray into PPV. Can you guess how the WWF counterattacked? Oh yeah, I reflected on the Royal Rumble last week, and that was on free TV! Let’s see what Dusty Rhodes’ booking did here.

Summary:  Boring mat-fest that barely had any drama leading toward the finish. Not a good opener.

After the match, Cornette enters the ring but is forced to back-pedal and accidentally tossed his racquet to Nikita. After Eaton and Nikita trade blows with the racquet, “Sweet” Stan Lane runs in to attack Nikita before dumping him to the concrete floor.

Summary: Really good match where both wrestlers executed well. Remarkably, Zbyszko would not relinquish this title until he returned to the AWA in 1989.

After the match, Hawk gives Flair a cross-corner whip resulting in a Flair flip. As Hawk grabs the chair, Flair flees the ring.

While the cage is erected, Caudle rattles off the credits. We then revisit the finish to the Western States title match. According to Ross, Rhodes is a two-time reigning Bunkhouse Stampede winner. Actually, he’s won the only three thus far. Will he achieve victory #4? Let’s find out…

Summary:  While I understand a standard battle royal would neither have sold tickets nor PPV buys, using the opposite pattern of the WWF’s cage policy to achieve victory seemed awkward. Since Rhodes wasn’t going to win the NWA World title ever again, he didn’t mind booking himself as the “bull of the woods” and Bunkhouse champion. Truly, I believe Luger should have won instead.

After the match, Jim Crockett gives Rhodes the big boot trophy and the check for $500,000. I hope he paid off Luigi and Sal before leaving town.

Conclusion:  While this show resembles a glorified house show, the Zbyszko title victory at least gives it some historical value. Despite the opener, this isn’t a bad show. If you’ve never seen it, check it out. Having said that, if I compare the initial Royal Rumble match to the Bunkhouse Stampede match, the Rumble wins by a nose.

See you for WWF The Main Event!