– Dave doesn’t feel very bad for Jim Wilson or Eddy Mansfield after the 20/20 piece, but the way the thing was portrayed was that “poor Eddy Mansfield just told the truth and now he lost his job” and all that “poor Jim Wilson did was refuse to sleep with a homosexual wrestling promoter  and now he’s blackballed”.  And all that John Stossell did was confront a faker and he got slapped around.  Dave quickly refutes all their ridiculous claims, noting that Mansfield was fired for no-showing and Wilson (while he might have been propositioned by the “mysterious” promoter) was blackballed for being a terrible wrestler who refused to do jobs.

– Next up on Dave’s hitlist, John Stossell.  Stossell had done “research” on wrestling for months, but was focusing his story on the WWF’s “monopoly”, which is of course patently ridiculous given the multiple wrestling promotions active at the time and mired in a vicious war.  So he called up Dave and asked him if Hulk Hogan was the best wrestler (Dave gags a little at that one) and when Dave replies that Flair is considered the best, Stossell replies “Who’s Ric Flair?  If he’s so great then why doesn’t he wrestle at Madison Square Garden?”  YEAH, DAVE.

– The biggest whopper coming out of the show was Vince denying that the WWF has ever kept anyone out of buildings, which Dave notes should have been the cue for someone to ask why no other promoter has been able to book MSG since the 1800s. 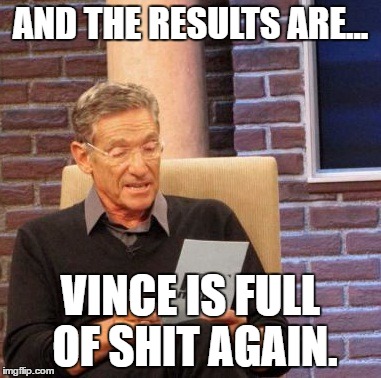 – Mr. Mike’s column doesn’t have much of note, but he does put over a pair of recent Eddie Sharkey trainees who are probably going to be big stars due to their size:  John Nord and Nikita Koloff.  Yeah, they did pretty well for themselves.

– Over to Japan, where the tide is turning favor of All Japan thanks to Riki Choshu, who is by far the most popular guy in Japan right now.  Oddly enough, the entire AJPW style is changing around Choshu, becoming faster-paced and harder-hitting.  Which is a good thing.  To add insult to injury, Baba is running the brand new Sumo Hall with the Road Warriors, while Inoki has been barred from it due to a riot after a Hogan match.

– Also, Dave has a picture of the elusive British Bulldog Maneuver of the Year, which appears to be Davey Boy lifting Tiger Mask into chokeslam position on his shoulders (the “one handed clean” portion) while Dynamite hits him with a missile dropkick.  Yeah, that’d work.

– Inoki’s plan to regain dominance over Baba:  Join forces with Verne Gagne and use AWA talent instead of WWF talent.

– The UWF guys don’t really like to call what they do “wrestling” and are trying to get everyone to call it “shooting” instead.

– So Dave acknowledges that yes, the WWF is really hot right now on the heels of the MTV special, selling out around the horn with a few notable exceptions.  This wave of success will be leading into a card on 3/31 at MSG with Hogan & Mr. T v. Piper & Orndorff on top.

– Dave watched the MTV special on 2/18 and thought that once again Hogan showed what a terrible wrestler he was, but the whole farce was very well done and made wrestling seem like a cool rock video, short but exciting.  Mr. T is also a disaster and fans will drop him faster than Christopher Cross after the initial excitement wears off, but Dave is pretty sure they’ll make a shitload of money on that unnamed closed-circuit show and break the gate record set by Starrcade 83. Kudos to Dave for an impressively-current pop culture reference at that point.

– Also, NBC is really sniffing around wrestling now like a dog in heat and they seem to desperately want to be in business with the WWF.

– Speaking of wanting to be in business with them, Jimmy Hart debuts in March as Greg Valentine’s manager, and King Kong Bundy debuts to have terrible matches with Hogan.  Ricky Steamboat and Matt Borne are both coming in as well.  Dave is pretty sure that Steamboat will be knocked to “Tito Santana levels” soon into his run.  Jimmy Hart is coming in specifically to use the MTV contacts to revive his recording career, but Dave thinks he’ll flame out and leave soon because of waning enthusiasm.

– Cycling out are Blackjack Mulligan, The Briscos, Dr. D (duh), Adrian Adonis & Dick Murdoch.  Adonis refused to do jobs to Mike Rotundo and basically got fired, while the Briscos were just never happy there and in fact retired to run their body shop.

– Meanwhile, Dr. D was fired for attacking Mr. T on 2/21, on top of the $3000 fine and three month suspension in New York he received for slapping Stossell.  Slapping the reporter was one thing, but attacking the Mr. T cash cow ended his career.  Dave brings extra snark with snark sauce on the side when talking about the “suspension”, as the newspaper that reported on the incident notes that it’ll cost Schultz “a quarter of a year’s income”.  Dave clarifies for the writer that there are in fact 49 other states where Dr. D is NOT suspended, and numerous other countries where a man can make a living as a wrestler.

– Dave notes that Barry Windham will probably be dropping the tag titles to Sheik & Volkoff soon and returning to Florida with his dad.  He then notes that the whole Windham & Rotundo push was because Vince really loved “Born in the USA” and wanted to create an American-themed team and play the song.  That’s certainly a wacky reason to push a team.

– Dave hopes that the new version of Stampede gets going and that Bret Hart goes back there, because his “once great work” has just gone downhill since joining the WWF last year.

– Dave makes fun of a story in Billboard about the WWF releasing home videotapes soon, including Best of the WWF volume 1 and Hulkamania.  Dave notes that if they’re looking for great matches for the latter one, it’ll have to be a T-15.  OK, so for the benefit of those who aren’t 40-something ex-tape traders such as myself, let me explain the joke.  VHS tapes used to be classified by how much they could record at standard speed.  Most tapes, especially mass-produced ones like the wrestling market used, were T-120, or 120 minutes, which is why all the Coliseum videos and Turner PPV releases were edited to two hours.  Full PPV releases from the WWF were typically released on T-160 tapes, which is where the PPV standard timing of 2 hours and 40 minutes came from.  So a T-15 tape would be 15 minutes, or not very long at all.  Dave hates Hogan so much at this point that he actually makes a point to apologize to Bob Backlund retroactively and notes that in fact Bob was not such a bad champion when compared to Hogan.  That’s pretty big of Dave.

– And finally, he finishes the Hulk bashing with a flourish, mocking the fact that Hulk Hogan dolls are on the way and wondering if they come with spots to insert the needles?

Time to pull a Costanza and leave on a high note.  Back tomorrow with the rest of the WWF and territories!