A mere thirty pages this month!  I could probably fit this all into one posting, but I’m gonna stretch it into at least two to force you to read all this free content.  Maybe there will even be some memes! 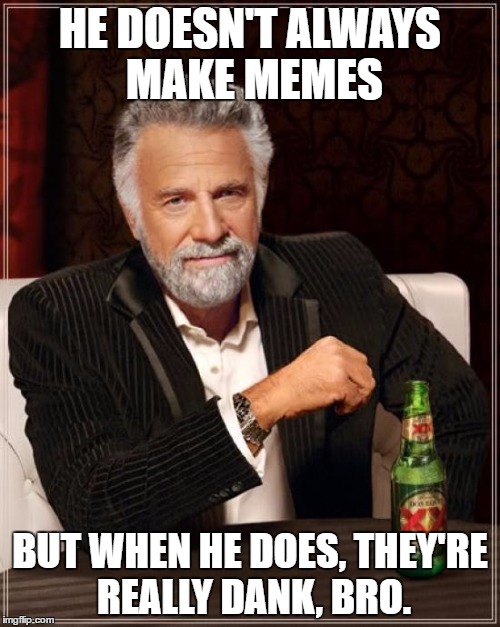 – FLASH!  Like right on the cover, before the issue even starts:  Eddie Graham died 01.21 from a gunshot to the head.  Cheerful start!

– In Dave’s actual lead story, the Vince McMahon media blitz strikes again, as Vince and Hulk and Patera were on Good Morning America lying about all the usual stuff.  Plus there was more hype for “Rock N Rasslin or whatever they want to call it on MTV.”  Dave can’t say anything nice about the product, but he gives them credit for excellent media manipulation, at least.  Dave again notes that they don’t draw well outside of the Northeast, but they could have one huge advantage over the territories if they can somehow snowjob NBC into giving them a network timeslot.  But that’s pretty unlikely.

– Dave notes that speaking of network TV, ABC was filming an episode of 20/20 at the MSG show, and one of the reporters asked Dr. D if wrestling was fake and got slapped around pretty good as a result.  Dave thinks that if Schulz can avoid suspension, he’ll become a bigger heel star out of it.

– Dave also sums up the difference between Vince and his promoter brethren after a TV convention in Santa Clara:  Vince might not have ratings that are better than the other guys, but he yells loudest about his ratings and so everyone just assumes he’s telling the truth and treats him like he is.

– Dave reprints some stories about Jim Wilson and Eddy Mansfield in a Philly newspaper, after their initial cries of “blackballing” by the NWA.  That story would drag on for YEARS, since it was finally just dying off for good in the 1988/89 issues we were reviewing!  Also, I should note that for someone who is as super-protective of his copyrights as Dave is, he sure copies a lot of current newspaper clippings for his own newsletter at the time.

– The newspaper stories themselves are actually very well researched, detailing stuff that came out at the deposition of Mansfield like how blading works, how heels call the match, how pay scales in wrestling worked, etc.  Stuff we all know now, but that no one in a time before the internet would ever know.

– In the letters section, Bill Watts writes in to thank Vince McMahon for “waking us up” and thinks that it’s time for regional promoters like himself to shake up their business model and rejuvenate things.  Yes, BILL WATTS was the voice of progressive wrestling promoting in 1985, the man who 7 years later removed the mats from WCW and banned top rope moves.

– WWF news!  Apparently the Tonga Kid (Sam Fortoo) might be gone.  Fortoo?  Dave thinks it’s unlikely since any push he gets is because of his supposed relationship to Jimmy Snuka as a part of the Roddy Piper feud.

– After the WWF took over the Toronto territory, they fired Angelo Mosca from commentary and made Jesse Ventura the new heel commentator.  Dave hasn’t watched the WWF TV show yet, but he imagines it’ll be a huge improvement.  You THINK?

– Dave finally watched the 12/28 MSG card and thought it was crap.  In particular he gave Cobra v. Black Tiger **1/4, calling it a “huge disappointment” and saying that they were working at half-speed compared to their Japan matches.  Say WHAT?

– Adrian Adonis is getting ready to leave, trying to negotiate a six-figure salary with Inoki where he’d work Japan for three months at a time and stay overseas, like Stan Hansen.  I will say, Adrian Adonis was no Stan Hansen.  They’re gonna put the tag titles on Windham & Rotundo soon, but the future champs have to work a Japan tour first.

– With Tonga Kid (you know, Sam Fortoo) perhaps leaving, they’ve already shot an angle where Tito Santana will be taking his place in the Piper feud.  Was that a thing that happened?

– The WWF’s swing through Western Canada was kind of a disaster, drawing 1700 people to a house show in Vancouver.  That’s weird, because just two years later I started going to shows in Vancouver and Hogan packed the Coliseum with about 15,000 people.  Also, the AWA ran a show around the same time and drew 3000, which gives the city four different promoters trying to carve up the territory.  Well, three promoters and Al Tomko.

– I should note that we’re at the end of January, and still absolutely no mention of Wrestlemania has been made yet.

– Jim Crockett is running in opposition to Vince in Philly, with a show headlined by Flair v. Steamboat on top and a whole lotta crap underneath.  The AWA is also running shows in the New York area, but despite the supposed alliance between the two groups via Pro Wrestling USA, they are treating each other as hostile and having no interaction.

– Speaking of which, the Pro Wrestling USA shows have featured Rick Martel defending the AWA title against Jimmy Garvin, featuring the Dusty Finish where Garvin pins him with a foreign object and then the decision is overturned.  Dave points out that smart promoters would not debut in a new market by featuring their champion getting pinned several times.

– The AWA has a Meadowlands show coming up, but they seemingly have no idea what’s actually going to be on the show.  Fabs v. Warriors was planned, but now the Fabs have apparently left the promotion.  Crockett and Gagne are pretty much actively sabotaging each other now, as Flair was scheduled for a Pro Wrestling USA show hosted by Gagne before Crockett pulled him out of spite.

– World Class is actually on the MSG Network now, starting with the Flair v. Kerry match from Christmas.

– Bob Backlund is trying his hand at promoting, and all the actual promoters have immediately shunned him and denied him talent, so this one probably isn’t going to last long.

– And finally, Crockett ran Pittsburgh on 1/17 as a WWF opposition show, running a main event of Flair v. Tommy Rich, and it drew 1700 people and had the crowd chanting “We Want Hogan” over the course of a 45:00 match.  Dave, in retrospect, thinks that might have been a bit of a miscalculation on Crockett’s part.

Back tomorrow with Japan and the rest of the territories!