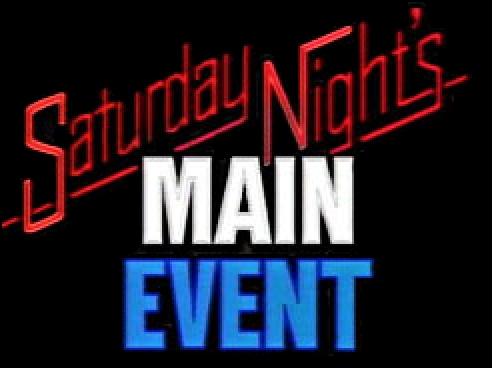 To open the show, Orndorff and Heenan run down Hogan. According to Orndorff, “Hulkamania dies tonight!” Well, he was only 91/2 years premature on that prediction.

Next, Hogan cuts a promo from within a steel cage.

Following that, Jimmy Hart calls out Piper for what he did to Adonis on SNME VII. In the meantime, Adonis will give Piper a Happy New Year.

Meanwhile, “Mean” Gene Okerlund interviews (or attempts to, in this case) Steele. His word for Savage tonight is “Surprise!”

Just for YOUR pleasure, “King” Harley Race wants JYD to bow down to him.

Solemnly, JYD rebuts by proclaiming his religious faith. Way to cater to the special interest groups there, Sylvester!

Vince and Jesse (sans wig) welcome us to the show and state that the very first steel cage match on network TV will occur tonight. Much like Orndorff, Jesse predicts Hogan’s downfall.

Backstage (now with a stand-in backdrop), Okerlund interviews Orndorff with Heenan. Since they’re in the insurance capital of the world, Heenan has purchased championship belt insurance. Wise investment or waste of money? You make the call!

Summary:  Very exciting cage match with controversy in the middle of it. As usual, Heenan over-sold Hogan’s offense which made for great entertainment. I highly recommend this match.

Afterward, Hogan re-enters the cage and nails Heenan. An atomic drop sends Heenan through the door and onto Orndorff.

Replay of both men hitting the floor simultaneously is argued between Vince and Jesse.

Backstage, Okerlund provides background on Steele’s HUGE crush on Elizabeth. Following that, Savage and Elizabeth join Okerlund. Once again, when Okerlund tries to ask Elizabeth a question, Savage cuts her off and shoos her to the ring. What type of “surprise” could Steele have in store?

While Savage makes his entrance, Okerlund interviews Steele about the surprise but gets nowhere.

Summary: While the Savage-Steele pot continues to simmer, the Savage-Steamboat steak is starting to sizzle. I truly cannot wait to watch their upcoming match at WrestleMania III.

After the match, Steamboat runs back to the ring so that Savage doesn’t hurt Steele. Without haste, Savage bolts to the back to find Elizabeth.

Okerlund interviews Race with Heenan. Instead of recognizing Race as an eight-time World champion, the WWF makes him “King.”

Summary:  The Danny Davis effect enabled this feud to continue toward WrestleMania III.

After the match, Race and Heenan double-team JYD and try to make him bow; however, they failed. Hence, Heenan and Race head for higher ground as Davis waistlocks JYD. The latter responds with a head butt to Davis much to Jesse’s disgust.

Back in the locker room, an irate Orndorff feels he should be the WWF champion. Heenan promises to get the gold for Orndorff based upon the footage. Okerlund joins them and antagonizes Orndorff. Ultimately, Heenan tells Orndorff not to worry. Whew!

After Adonis makes his entrance, Okerlund interviews Piper who cuts an intense promo.

Summary:  Obviously, there’s more to this story that will be told at WrestleMania III.

After the match, Piper returns to the ring and mistakes Marella for Adonis and gives him a hip toss. More officials provide assistance for Piper and put a towel in his face.

Back in the locker room, Okerlund interviews the victorious champion who is wearing a typical 80’s satin jacket. Okerlund relays the news regarding Heenan’s upcoming chat with Tunney. With conviction, Hogan refutes Heenan’s claim.

Summary: Funk was performing enhancement work at this stage of his WWF career.

After the match, Mulligan hangs Funk with his noose, but Funk escapes practically unscathed.

Conclusion:  Ignoring the opening and final matches for a moment, the meat in the middle of the show dealt with setting up matches for WrestleMania III. By themselves, they served that purpose as well as entertained me.

The opening match was certainly controversial and involved instant replay which was a HUGE topic of discussion with the NFL during this time. I’m certain “Mr. Wonderful” looks back at his series of matches with Hogan fondly as they were true money-makers.

If you’re like me and want to watch the table-setting for WrestleMania III, check this episode out.