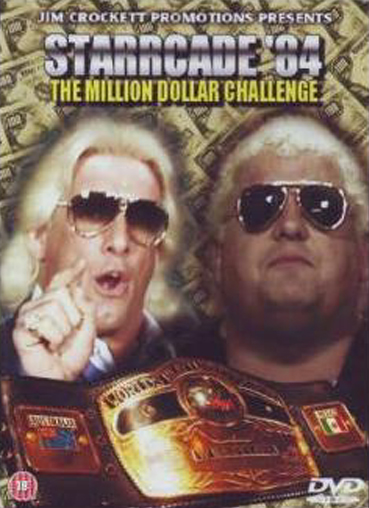 The ending of the main event from last year’s show is shown as Flair became the NWA World Champion for the second time.

Summary:  This was a short mostly mat-based match which earned Brown some quality time as junior heavyweight champion with Jim Crockett Promotions.

Ring announcer Tom Miller announces Davis as the winner then corrects himself. In spite of the clear camera angle showing Brown’s shoulder coming off the canvas, both Solie and Caudle are befuddled by Hebner’s decision.

Highlights from NWA World Wide Wrestling are shown. Tully Blanchard, the Long Riders (Ron Bass and Black Bart) and James J. Dillon are mauling Dick Slater and Ricky Steamboat. While Blanchard and Bass hold Steamboat, Bart mounts the top turnbuckle and nails him in the back with a cowboy boot.

Summary:  Zero redeeming value for this short mess. Move along.

In the dressing room Tony interviews the “American Dream” Dusty Rhodes. Dusty sells this match like it’s the “Thrilla in Manila.” Obviously he wants the victory, the title, and the million dollars.

Summary:  While the fans loved Fernandez this wasn’t a great brawl whatsoever.

During the intermission the finish of last year’s main event is shown again. Immediately thereafter, Tony interviews Ricky Steamboat in the dressing room. Steamboat has put up $10,000 against Tully’s TV title. In spite of being injured Steamboat states he will be ready for him.

In Blanchard’s dressing room Tony tries to get the scoop from Dillon. While Dillon is upset about the previous match, Tully cuts a money promo on Steamboat. He wants the winner of the Rhodes-Flair World title match.

Summary:  The tale of this match was Jones getting his comeuppance until Valiant could be outsmarted. Not a bad story, but at the same time not a good match.

Back in Flair’s dressing room Tony interviews the champ.

Summary: As a babyface Slater seemed watered down. I realize something had to be ongoing to fill the houses after this show, but this match could have been much better than it was.

Afterwards an infuriated Slater delivers elbows to both Dillon and Bass.

In an ultimate act of patriotism a trumpet plays the national anthem as the camera focuses on the American flag. Gee, I wonder which match is next.

Summary:  Tag formula plus 80s jingoism made this a fun match; however, Nikita’s skills were very limited since this was very early in his career.

After the match the Koloffs attempt to double-team Larson, but Kernodle whacks both Koloffs with the crutch and chases them out of the ring. U-S-A! U-S-A! U-S-A!

Summary:  Combine Steamboat’s speed and savvy with Blanchard’s treachery, and this was a very exciting fun match.

Summary:  This match was clipped to hell, yet barely had anything going for it anyways.

Once again, the finish to Starrcade ’83 is shown. Enough already! We get the point.

Back in the dressing room, Tony interviews Duke Keomuka, Joe Frazier, and NASCAR driver Kyle Petty. According to Tony, all three men will be judges should the match go the full sixty-minute time limit. Duke is ready for a great match. Frazier states he’ll make sure everything goes right. Uh huh. Petty’s worried about how tough each wrestler is.

Summary:  Not the best Rhodes-Flair match you’ll ever see. Finish was very puzzling yet made sense from a boxing perspective.

After the match, Rhodes charges after Frazier but is restrained by Fernandez, Brown, Adias, and others. Meanwhile Jim Crockett hands Flair a $1 million check at ringside. Back in the ring Fernandez applies a towel to Rhodes’ cut.

In the dressing room Tony interviews Flair who states he will be available for Starrcade ’85 next year.

As Solie and Caudle sum up the show, one of the ham’n’eggers in the audience finds the broadcast position and has a shit-eating grin on his face while on camera.

Meanwhile back in the dressing room an extremely perturbed Rhodes calls out Frazier. He then tells Flair that this isn’t over and pushes Tony away before leaving.

After a highlight package Tony interviews Frazier. His philosophy is that it was a bad cut and he feels that his decision to stop the match is justified.

Conclusion:  While last year’s show had a great ending and began what became the Flair era in the NWA this show felt much flatter. With the exception of the Steamboat-Blanchard match everything was either rushed or didn’t have a lot of impact/emotion.

On a positive note this show featured the involvement of celebrities. While NASCAR wasn’t anywhere as big in 1984 as it is now, Greensboro was smack dab in the middle of NASCAR country; therefore, the inclusion of Kyle Petty worked well here. On top of that, inserting Joe Frazier who not only was a former boxing champion but also a big name in closed-circuit programming into the main event match was a bold move.  I wonder how other promoters will react.

As far as my recommendation is concerned, this show barely holds any historical significance so I wouldn’t go out of my way to watch it.

See you for WrestleMania!