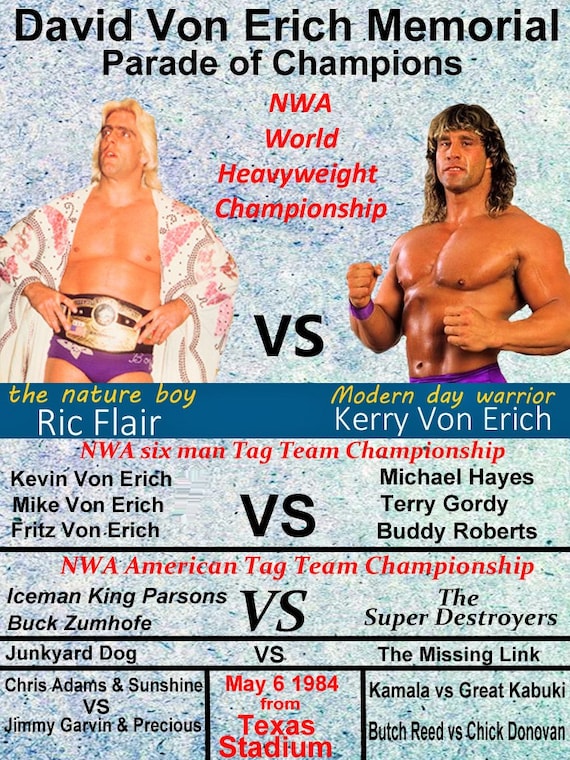 First of all, I would like to take WWE Network to task for not having this show available. While the Vault doesn’t get as much traffic as the current content, supershows such as this one (and its successors) along with AWA’s Superclash shows would help to promote the vast content of the Network quite well.

Second of all, this show was held at Texas Stadium (then-home of the Dallas Cowboys) as a tribute to the recently fallen David Von Erich. Prior to his death David was being groomed for the NWA World title. Some would say he was the best wrestler among the Von Erichs while others would argue that Kerry was the star.

Summary:  Reed’s days were definitely ahead of him (“The Natural”, Doom).

Summary: At least the fans were behind Kabuki in this dreck of a match. Lowrance noted the match result was a double-disqualification.

Afterwards Hart chokes Akbar in the corner until David Manning arrives to break everything up.

Summary:  JYD was on his way up north so he was putting over talent.

After the match Lubich comes into the ring and reverses the decision. In protest the Link rams his head against the wooden steps. Gee, therapy back in the mid 80’s must have been expensive for this guy.

Summary:  Not a lot of chemistry between these teams, but the tag formula worked to a certain degree here.

Summary:  White-hot feud that the Texas Stadium crowd ate up with a spoon.

After the match Killer Khan comes into the ring and attacks Kevin. Lowrance’s lack of political correctness rears its ugly head by referring to Khan as “a huge, mean Oriental.” 1984, ladies and gentlemen. Meanwhile Kerry joins his father and brothers in the melee with the Freebirds and Khan until the heels leave to fight another day.

Summary:  While not a technical masterpiece this victory was tremendously symbolic for both the great Von Erich family and World Class Championship Wrestling. Due to its significance, I awarded the match an additional ½*. More on this later.

As the crowd loses its collective minds, the Von Erich clan runs into the ring to celebrate with their brother.  Also, the babyfaces from the locker room pour into the ring to mob Kerry in celebration. In pure disbelief, Flair tells Kerry that “(he’ll) be back.”  With the Texas state flag and a yellow rose, Kerry stands tall in the ring.

Summary:  The female portion of the huge crowd loved this match.

Afterwards Precious returns to the ring and wallops Sunshine with her purse before fleeing with Garvin. Sunshine bolts from the ring and tackles Precious. A bloody Adams chases Garvin back to the tunnel.

Conclusion:  If you’ve never seen WCCW this show would be a good introduction. As I mentioned earlier, David Von Erich was seen in the NWA as a future/potential World Champion; therefore, it was a tip of the cap by the NWA to WCCW giving Kerry a title reign.

Unfortunately, due to Kerry’s issues, his reign was cut short by the NWA eighteen days later in Yokosuka, Japan as he lost the title back to Flair.

Definitely check this show out, but I would hope the WWE Network can supply an unclipped full version unlike the copy I acquired.