Skip to content
I can remember the first time I ever thought that titles
were important.
It was during a Flair/Luger match; Clash something or other,
Fall Brawl, Mountain Madness. But unlike other Flair/Luger matches, it was for
the US title, and I can distinctly remember the voice of Jim Ross throughout
the match, screaming about how Flair NEEDED to win the US title so he would be
the number one contender for the World title. It was pounded home, the entire
match; need to win the US title to get another match with Sting. Then, at the
end, Stan Hansen attacked Luger to set up their program, and that had been set
up earlier in the show by Hansen wanting to move up the ladder so he could get
paid more money, which would be accomplished if he won the US belt.
Long story short, EVERYTHING in that match, from beginning
to screwjob, revolved around that belt.
Of course, now, the prestigious US title is….well, how
exactly would you describe the current positioning of both the US title and the
ostensibly equally prestigious Intercontinental title, guest wrestling critic
Jay Sherman?
Danke, Mr. Sherman.
Let’s admit something here – the ultimate goal of making
title belts little more than props has been achieved, to be sure, especially
over the last 10 years or so. The ‘prestige’ of a title reign is less than it
used to be.
How can we fix that?
Let’s start with the Intercontinental title this week. We’ll
tackle the US next week.
The Intercontinental title has been, shall we say, passed
around at a rate rivaling a French whore in a Victor Hugo novel in the last
several years, with an actual French whore probably holding the belt at some
point in that time period. (Fun exercise in the comments section: Name that
French Whore/IC Champion!)*
So, what we need is some stability for the belt, some kind
of reign that will legitimize the title again; what we need is someone who requires
some rehabilitation but is still a legit threat to the upper card if we’re going
to try to make the belt strong again.
Bray Wyatt, meet the Intercontinental Title.
Intercontinental Title, meet Bray Wyatt.
Please don’t leave the belt alone with Rowan for any
extended period of time during your days together; he makes us nervous.
Why Bray Wyatt, you may ask?
Well, let’s break it down:
WHY DOES BRAY NEED THE BELT?
Wyatt is spinning his wheels – and that
may not actually be a cliché, considering the Wyatt family gimmick. You tell me
they have a spinning wheel on that farm, I’d believe it. But still, Wyatt has
been on an uphill treadmill in the fed since the Cena feud. Sure, he’s hanging
out near the top of the card, he main-evented Raw last week for God’s sakes!
Of course, a few weeks ago, so did this man…. 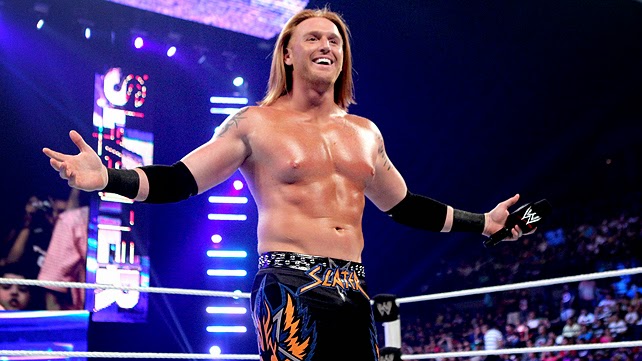 …um, no. I meant Bray Wyatt and…Curt Hennig.
Hennig’s career trajectory followed Bray’s in some ways. He
went over jobbers for months, was given vignettes that established the
character before he came in, and he worked his way up Hogan with a perfect
record before doing the job to him – but instead of sinking him to the bottom
of the ocean, he went over for the IC belt and became a standard bearer for
that title, holding it for multiple reigns and treating it as though it were
quite prestigious the whole time.
Let’s take a quick look at Bray: vignettes to build up the
character? Check. Winning streak to build up his character? Yup. Worked his way
to the top face in the company and lost the feud? Cena says hello. And now…..
That’s why the IC title was so important. Wyatt is perfect
for it at this point in his career. It gives him focus and it gives him a
storyline that can relate both his strengths as a character in his wacky-ass
promos while still allowing the traditional wrestling storylines to permeate through;
sometimes we forget that the reason that some things are tradition are because
they, you know, WORK. Combine the two and we have a winner.
And that’s the Wyatt is so important for the title. The
title can only benefit from a strong reign by an over heel that could go many
different directions. The title can only be elevated by someone making it a
focal point of their character, especially if that character evolves along the
way as a result of that reign.
So, WWE, take my advice:
Follow the buzzards.
Rick Poehling
@MrSoze on twitter
*As far as I know, there weren’t any French whores that held
the IC title, but here’s hoping it’s good for some chuckles from you all in the
comment section. Fire away. All jokes about The Miz will be ignored because, face it, that one’s too f------ obvious.