On This Day in WWF/E History….. 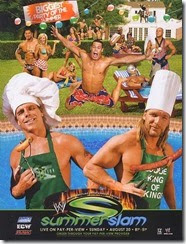 I know Summerslam fever has died down a bit (or has it) after the PPV this past Sunday, but for my first post on the blog, we’ll definitely be going back in time a bit! Summerslam 2006 took place at the TD Banknorth Garden in Boston, MA. I was watching the product at the time, but I didn’t catch this one when it aired. I subscribed to the WWE 24/7 OnDemand service (remember that), so it was there that I watched this PPV, basically a few months after it took place. It was a decent show, nothing too special. The main event, which saw Edge defeat John Cena to retain the WWE title was a **** match (they would go on to top this in their TLC match at Unforgiven). The rest of the card wasn’t too bad. Hogan vs. Orton should’ve been a bigger deal than what it was, but it turned out to be just another match, considering that Hogan wasn’t seen in WWE again until his return this year. The DX vs. The McMahons match was about what you would expect, an overbooked brawl, and this match should’ve ended the LONG storyline between them that year, but we just had to get a HIAC match (along with Big Show) the next month at Unforgiven. Flair vs. Foley in a “I-Quit” match was quite the bloody affair, while Batista vs. King Booker for the World Heavyweight title was probably the worst match of the night. Looking back, if you’ve seen this show, how does it hold up for you today?