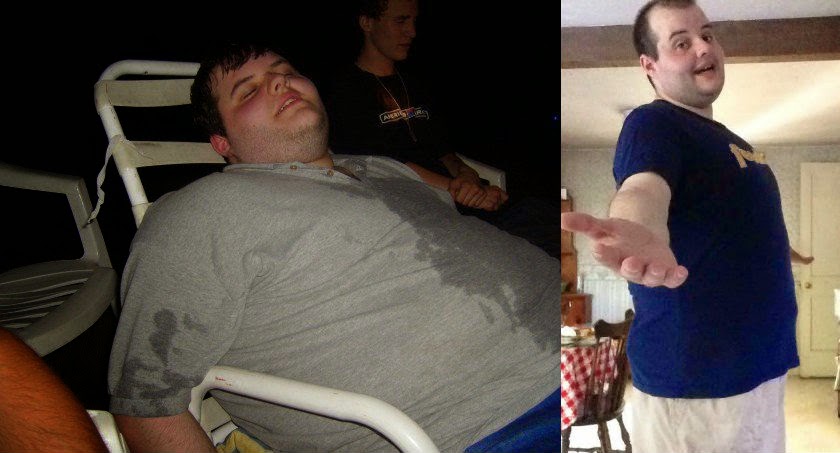 You can’t tell in the photo, but within moments of the picture on the left being taken, the right back leg of the chair I was in collapsed under my own weight, and I spent the night passed out in a three-legged chair.
It was not a proud moment. It was 5 months after high school graduation.

The photo on the right was taken 20 minutes before a date with a very lovely girl with a degree in environmental sciences and an affinity for adventures and cheesy movies and third base. It was a day in which I displayed a confidence I didn’t know I had.

For a time I was bad with that confidence. I had more energy and thereby took on more responsibility
at work, I was churning out a novel’s worth of writing content for WhatCulture and got burnt out right quick, and happened into a couple of romantic relationships with women
who lived pretty far away. Those romantic relationships turned into romantic dinners, turned into
popcorn at the movie theater, turned into skipping my workout to go
spend 40 minutes getting cardio in a different way, if you get what I’m
sayin’.

Thus, what I call being a hopeless romantic, and what
medical professionals refer to as a serious chemical imbalance, has pros and
cons. When I fall for something, I fall hard. Pulp Fiction blows my
mind? I watch everything Tarantino did within a week. Pretty girl asks
me out? I’m half ready to propose on the spot.  But with a snap
of the fingers the shine comes off the apple.

And then…I was hired at a clothing model.

About three and a half months into my DDP Yoga adventure, I was hired (presumably by a blind person) to wear and model fat guy clothes to the tune of 25
dollars an hour, and all the polo shirts I could eat. This isn’t why I stopped, but it was a good an excuse as any to not continue.

My daily yoga went from every other daily yoga, to changing the workout from the longer, more intense “Energy” workout to the easier and shorter “Red Hot Core”. All the mostly healthy choices I made turned into ‘some’ healthy choices, and I found myself at Wendy’s eating a god damn delicious Pretzel Pub Chicken sandwich I swore I’d never eat again…with a large Dr. Pepper.

It was a dark time. I fell out of DDP Yoga the same way a hung person falls out of their boxers – I was flopping around feeling like the world’s biggest dick before I knew it. People complimented me on the weight loss while I was buying junk food from Wal~Mart. People added me on Facebook based on the previous two DDP Yoga entries here, and I preached what I lapsed in practicing.

Then, two things happened about a month ago. First, I read Scott Hall no-showed an event. Whether or not it had anything at all to do with his various demons and shenanigans, it hit me a bit. My entire life I’ve been very…cyclical. I like something, get into it, get out of it, then never go back. I did not want to be one of these people again. If I couldn’t work my creative muscles, I would work my actual ones.

Second, a friend of mine who was doing a “Couch to 5k” stopped the program, and upon asking her about it, she said she felt like a big poop for stopping. “Well,” I said, “The only thing that would stop you from feeling like a big poop would be to start again, right?” She smiled at these words of encouragement.

And in a rare moment of someone actively taking their own good advice, just like that, I was back on the wagon. Energy every day. On days I was sore or busy, Red Hot Core. I was on fire. I worked and worked, mixed Yoga with golfing and hiking, and other physical activities I never liked, but now found myself at least…serviceable at, and actually enjoying my ‘active’ lifestyle.

I don’t know what my modeling boss is going to say when they see there is far less of me than last time, but hey, if I get to hear “You’re too skinny!” for the first time in my life, it’ll be worth it.

I weighed myself for the first time in months, and found I was hovering at a nice, odd, 270.8 pounds, down 20 pounds from the last time I stepped on the scale, and down quite a bit more from my all-time high water mark of 320 pounds. I put on a shirt I knew was too tight on me when I was in college, and low-and-behold, it fit wonderfully. I took the photo you see above, and posted on the DDP Yoga Facebook page because if you can’t tell by now, I crave attention like a commanding officer entering the barracks.

I was greeted with the following message a few hours later:

It’s entirely possible this was some sort of form letter, but regardless, as far as encouragement goes, I couldn’t ask for more. And encouraged I am. Back on the horse, feeling good, having waded through a valley that I rarely come out of when it pertains to health and fitness.

So, why did I stop? Why does anyone stop? That I can’t tell you. I can tell you people don’t start again because it’s scary.  We only see before and after photos because the middle is murky. We’re told the best way to get back on the horse is to simply get back up on it. But the problem is the horse just threw you off its back like a sack of potatoes.

It’s not getting back on the horse, it’s the fear the horse can throw you off again that sucks. It’s the worry that all the hard work, and tough choices, may not pay off, even though they clearly have, so why bother continuing to make them?  90 percent of the game is half mental. Unfortunately for fat folks, those lacking in confidence, and people who are terrified a work out will leave them behind and feeling fatter than ever, the mental element is the trickiest part to conquer. In my most private moments, I look in a mirror and despite my better posture, loose clothes, real biceps, and healthy complexion, still feel like the guy who got dumped for a lesbian at a sophomore Halloween dance.

But that’s what photos are for. That’s what scales are for. For the first time, ever, suddenly the scale in my laundry room is a comfort. I look at the photo of myself in that Foodler shirt – which I used to wear under all my clothes and tuck into my underwear to make me appear skinnier, and marvel at loose it fits. I tried on a shirt I bought in 8th grade, and it fit. When your mind plays tricks on you, rely on the facts.

And the facts are as they have always been. There are no secrets. There are no cheat codes. There’s hard work. And that’s scary because working hard on something only to fail is petrifying enough to stop you before you even get started. But DDP Yoga is a good kind of hard work. If you can find
20 minutes a day and a DVD player, and read the booklet, and will
yourself, come hell or high water, to do it? You’ll be blown away by the
changes. But God, you gotta keep at it, because if you stop after seeing what it does for you, it’s impossible to live with yourself.

In the words of REO Speedwagon, if you’re tired of the same old story, well baby, turn some pages. In this case, Diamond Dallas Pages.