Skip to content
Game:  Valiant Hearts: The Great War
Developer: Ubisoft Montpellier
Platforms:  Windows, PS4, Xbox One,
Did I Pay For It: Sorta

The debut trailer for ‘Valiant Hearts: The Great War’ is one of the best ever. Stark and boiling over with gravitas and pathos, if you got a chance to watch Ubisoft’s E3 Press Conference, it’s clear the audience was seven seconds away from bursting into tears.

But the problem with a great trailer is pretty much anything can be made look awesome with the right music, pacing, and tone. Hell, just look at how exciting my life is when you throw in a little Haddaway and rip off the Scrubs finale: Family: The Trailer.

There’s no way Valiant Hearts would be able to maintain the emotional punch its trailer did, and it doesn’t. If you do a google of “Valiant Hearts” and “Cry” you’ll likely find countless reviews saying the imagery and music and location and narration got them in ‘the feels’, but in reality, that’s not going to happen as strongly as you think unless you approach the game wanting and needing an emotional response.

The problem with Valiant Hearts: The Great War, is that it mashes up two great ideas that don’t go well at all together. It’s a driving range at an Opera. A jigsaw puzzle at a wake.  It’s a Hell In A Cell match between Jackie Gayda and The Brooklyn Brawler.

To fully explain, we’re gonna have to go Greek, so puff out that chest hair and getcyha Feta ready.

Aristotle’s three modes of persuasion are as follows; Ethos, Pathos, and Logos. For Valiant Hearts, we’ll be
speaking specifically of the last two.

Ethos is an appeal of authority. I.E I’ve seen all of the best movies to ever come out in the history of the universe, therefore I am qualified to be excited about Apocalypse Now. I’ve seen every single episode of Monday Night Raw, therefore I’m qualified to tell you every thing about the WWE sucks right now. I know more about this thing than you do, so you should listen to me. For example: Scott Keith is Ethos defined. He’s likely forgotten more wrestling than most of us remember.

Pathos is an appeal to your emotion. Please read my review because I’m a lonely person with no friends who seeks attention like a puppy-dog seeks love.Why are you guys so mean to me, don’t you see I’m just trying to entertain? Can’t we all, for us, for wrestling, for our humanity, and for America, get along?! Countless upworthy and Gofundme.com links rely on their ability to capture your emotions to draw you into whatever it is they’re trying to persuade you into doing, be it clicking a link or funding their stupid indie film.

Logos is an appeal to logic. Daniel Bryan is the most popular wrestler on WWE Raw, therefore he should be world champion. Tom Brady is getting older and declining, so he needs weapons or else the Patriots can’t compete at an elite level any more. Logos is the most analytical of the three, and relies on a person’s ability to deduce information in a sensible way. That’s not to say Logos can always be correct. For example an inaccurate statement in the Logos vein would be “90 percent of statistics are made up”. 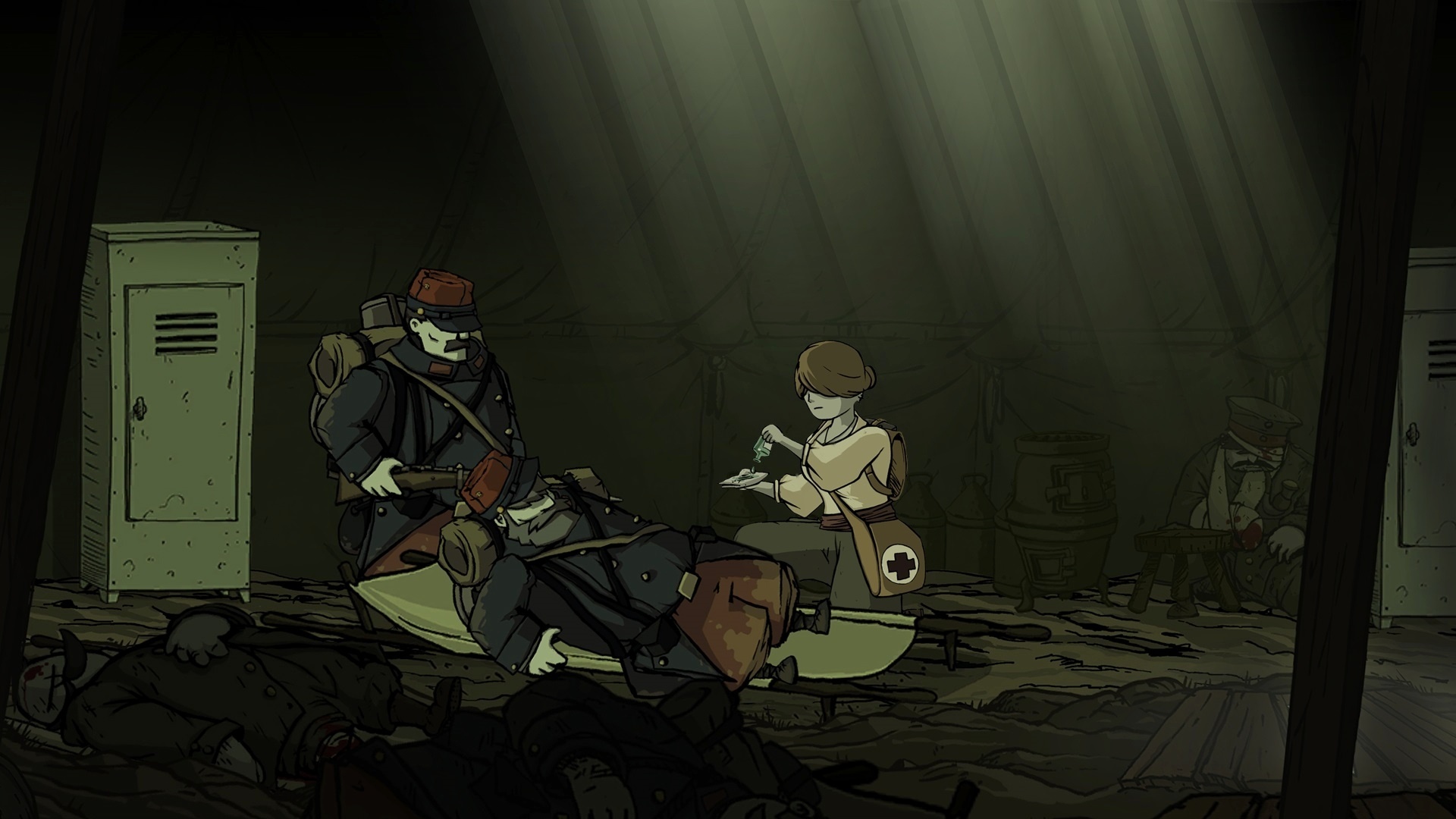 Valiant Hearts wants you to think it’s all Pathos. A World War I drama, it follows the interconnecting paths of folks torn up in the turmoil of the era. The characters range in culture, ability, personality, and their back-stories are compelling enough to warrant your attention and interest.

But the game wants your heart. Between the somber piano music and hand-drawn art style that’s synonymous with games like Braid, Valiant Hearts is seems to desire some indie cred, as Ubisoft has clearly taken notes from the multiple games that endear the player via melancholy tone and wistful beauty.

Which is fine. The atmosphere of the game is wonderful and somber and reverent, characters animate in a way that is broad and universal as well as often times touching;
be it a chirp, laugh, or the whimper of a puppy who sticks his nose in
the wrong business. When I mentioned the word stark above, I meant it.
Valiant Hearts’ art-style screams care and oozes personality. It will remind some folks of the Triplets of Belleville. 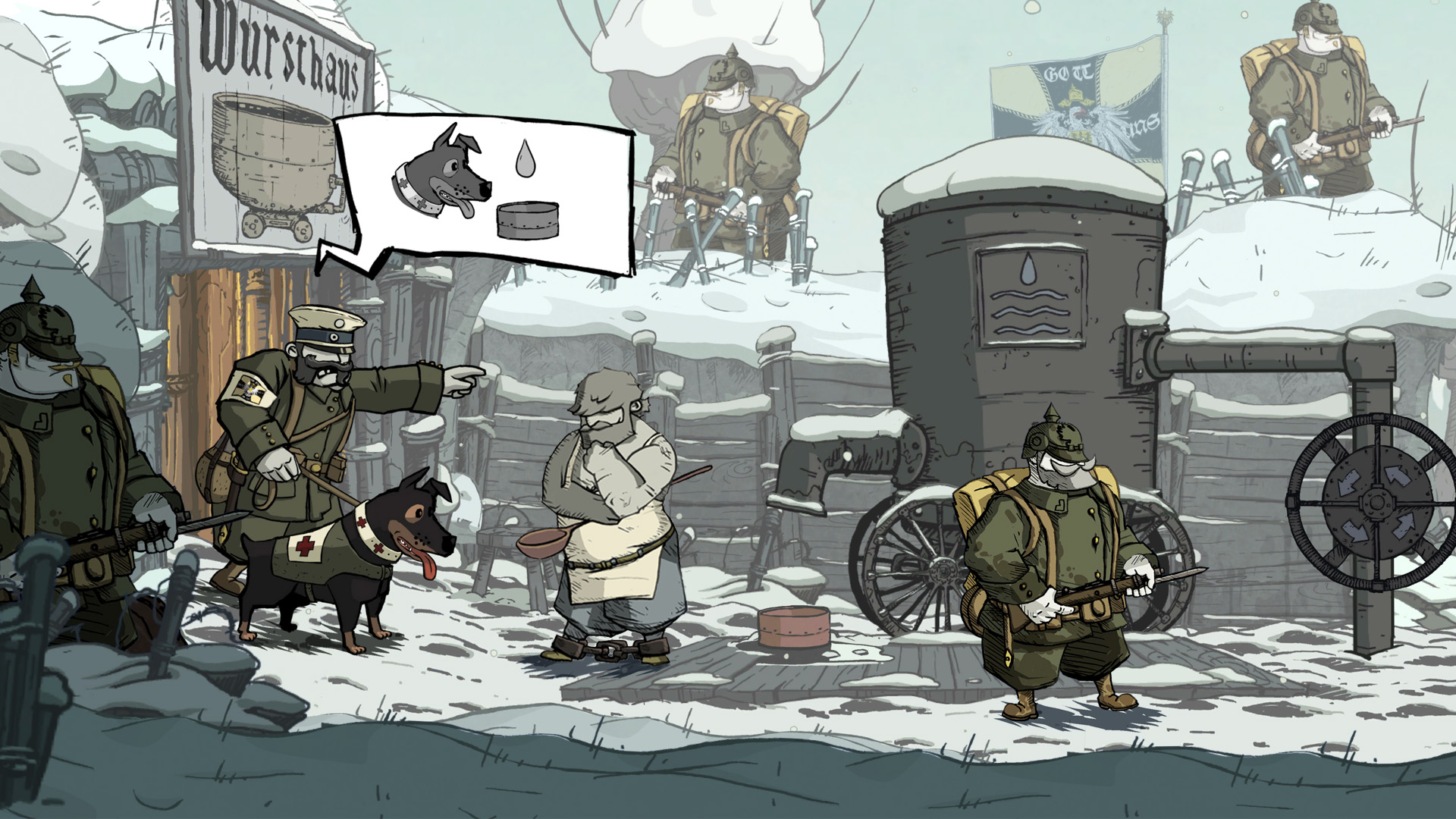 Valiant Hearts is clearly
setting the player up for some kind of heart-wrenching tragedy, as a brother vs. brother dynamic unfolds via a German immigrant in France who’s forced to return home and
fight for Germany, ostensibly against his wife and literally against his father-in-law. Other threads emerge, and the likelihood of a  truly happy ending is not high. Valiant Hearts is about the horror and camaraderie and memories and tragedies and experiences
only people who have served in a war can truly understand.

But sometimes what something’s about and what it is aren’t the same. Valiant Hearts’ gameplay trades exclusively in the currency of Logos. It’s an adventure game that’s heavy on puzzles and making your way through a given area by pulling the right switches in the right order. Dig a specific way, use an item to distract a guard over here, walk in tandem with your puppy here, then use him to distract a guard there, and so on and so forth. Each character has a special ability or two, and you’ll switch between them to accomplish the more elaborate challenges.

The puzzles grow in complexity and in their mind-bending nature, to the point where the first boss battle is pretty much an update of the final encounter in Super Mario World; pick up this thing, angle it the right way, and toss it into the open spot. But the game’s closest relative is probably Blizzard’s The Lost Vikings, where you’d complete mind bending puzzles by switching between characters on a 2D plane. Both games feature combat but are not about combat. Both games aren’t so much about action as they are about action being the end result of pondering.

There are other kinds of gameplay that break up the puzzles, including
weird rhythm sections when you’re healing a wound like Rock Band: Combat Medic edition, and ‘get out of the
way of the incoming bomb’ moments that are often set in time with music.You’ll do other assorted tasks too in service of the story like roll out a giant bowl of soup for your captors while a POW, and so on.

Completing levels and finding collectibles rewards you with a
boatload of historical information, various medals and other easter-eggy
kudos, and leads into more of the narrative. It’s really fun in that mind-bending sort of way, and no puzzle is too difficult to give complete pause. If you enjoy stuff like Lost Vikings, Braid, Myst, Monument Valley, or old adventure games like Day of the Tentacle or Indiana Jones and the Lost City of Atlantis, playing Valiant Hearts scratches that niche wonderfully.

But there’s something weird about having puzzles that challenge your analytical thinking ability, while the narrative deliberately presses on the parts of your brain that are intentionally irrational – your emotions. There have been puzzle games with wonderful plots like Portal and Portal 2, and Braid was as mind bending as it gets. But those games weren’t trying to tell a story specifically designed to impact you the way Valiant Hearts is. Valiant Hearts is about specific places, people, and events, and is clearly desperate to make you sad in that ‘beautiful’ way movies like Saving Private Ryan do.

It’s like taking a test that switches between complex algebra and interpreting All Quiet on The Western Front. By its very nature Valiant Hearts needs to come to a complete stop every few minutes to allow you to approach and solve a puzzle. There’s no flow.  If you’re not super into puzzles, but are into well written and creative stories you have yourself a bit of a pickle.

Which is great if you like pickles. It’s perfectly fine to enjoy both these elements separately and get your 15 bucks worth out of the game – and then some. The puzzles and narrative are too creative to be considered anything but quality, even if they arrive at perpendicular angles to one-another. getting through the 8-10 hour adventure felt a little like Bioshock:
Infinite in that I’d be banging my head against a wall to progress just to see the story, only to like the story less because I was irked from the stuff I had to do to see it in the first place.

If I bought this game I would have been a little confused and a little dissapointed, but realized the quality none-the-less I’m just not a big ‘puzzle’ guy.

If you’re a puzzle guy or gal, history buff, or just like playing games that are unique and visually interesting, Valiant Hearts: The Great War is a great way to learn about some bad stuff that happened in Europe a few decades ago.