Skip to content
I was going to review ROH’s Best in the World PPV, but I just could not make it all the way through the show. I expected it to deliver, but it ended up being (from what I saw) a rather mediocre show. I decided to watch Money in the Bank 2013 on the WWE network instead.
Money in the Bank 2013 Review 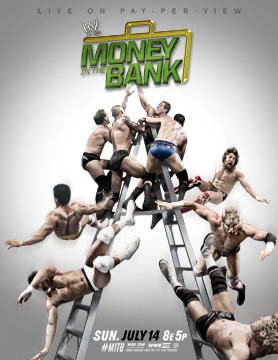 Ziggler’s girlfriend, A.J. Lee, comes out. Ziggler tells her that he does not need her help. Ziggler escapes a Del Rio sneak-attack him, but Del Rio crotches him on the top rope and hits a flip-over facebuster for a nearfall. Del Rio throws Ziggler into midair and then hits him with a standing kick. Del Rio goes for a cover, but only gets a two. Del Rio lowers his kneepad, exposing his kneebrace. He goes for a running knee, but Ziggler moves out of the way. A.J. jumps into the ring and hits Del Rio in the face with her Divas Title belt, giving Del Rio a DQ win @ 12:30. Even though Dolph Ziggler was inconsistently selling his injured head, both were working hard to come up with creative ways to counter to get in their signature and finishing moves. This was building and leading to something great until the anti-climactic finish. An epic finishing sequence could have bumped this into **** territory. As is, it was about ***.