Through a startling show of confidence in my writing ability, I was recently given an article about the inventive wrestling finishes.

I complied the top half of my list here, and you kind folks are totally welcome to poop all over it in the comments, or even better, when it comes out sometime this week, but now, lets rap about creative match endings!

What are your personal picks for the most creative match endings in pro wrestling History?

Cool sequences, inventive use of foreign objects, surprise interference, or that time Mick Foley used a Fork Lift with a magical POV camera on it to pin The Rock during The Superbowl – anything and everything is game! These don’t even have to be ideas you like, but respect the creativity surrounding them.

Below are 5/10 entries I could come up with between yesterday and today. I’m going to be watching and catching up on a lot of, so please don’t consider this list definitive or arranged in any order from ‘worst to best’. Just 5 worth highlighting.

Talk about a heart breaker. While Flair has gone on to wrestle other matches and make more appearances, the ending of this match was painstakingly brutal, to the point where the story they told was better than the match itself, and seeing it again only diminishes the magic of seeing it the first time.

While dialog in pro-wrestling matches is often times..uh..awful (looking at you Triple H vs. Taker HIAC), here that phrase followed by the proverbial kill shot that put Old Yeller out to pasture was the perfect combination of drama, pro wrestling, and reverence for the past that makes hardcore fans well up with allergies.

Once word got out that Brock Lesnar could do the Shooting Star Press, internet smarks were clamoring to see it in action (while Billy Kidman was pissed about gimmick infringement). Come Wrestlemania 19, it seemed that moment was about to happen as Brock asceded the top rope and….

Well to say the idea ultimately ended flat on its face would be a far to appropriate metaphor, so lets just say it ended poorly. And yes, I know this isn’t from the match, but I figured we didn’t want to see a guy land on his head and almost kill himself on repeat.

3) Mankind vs. The Rock – Mankind gets NSAed.

The I Quit Match has the benefit of being the first PPV I every paid for as a kid, and boy-oh-boy did I pick a bad day to stop sniffing glue. A brutal match that left everyone feeling woefully uncomfortable, the ending featured a pretty creative ending that was essentially a cop-out, but a cool cop-out none-the-less.

Since Mick Foley would never quit, and they didn’t want The Rock to lose, the Corporation used some prior interview footage, doctored it, and played while Mankind was out cold in a creative twist that left many viewers thinking something wasn’t quite right with the way Mankind gave up.

Their next PPV match featured one of the few double count-outs in a Last Man Standing Match, and is a nice little companion piece to this brutal endeavor. 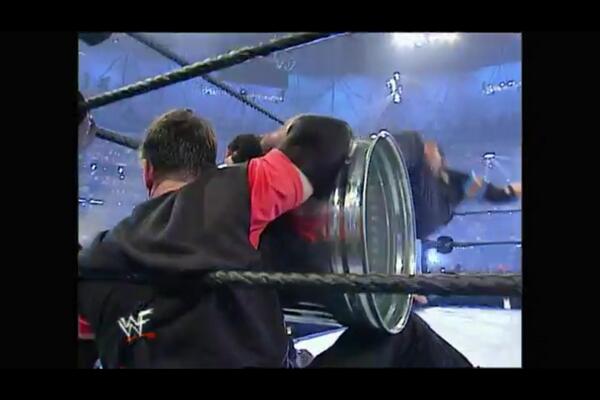 Of all the matches on the Wrestlemania 17 card, this one seemed to pay off the Attitude era most. Vince is bested not only by his own son, but the wife he’s tortured and the company man (Foley) he never respected. Then Linda shows up and wills herself out of her coma to whallop the man in the balls. So good.

The way the vents begin to unfold, and how Shane lands the Van Terminator in an insane OH MY GOD moment, make this one of the best finishing sequences in WWE history.

1) Rock Vs. Austin  – “Deal With The Devil Himself” Wrestlemania 17

Obviously this didn’t end as planned, but it was a great idea at the time – Stone Cold ultimately turning on his fans, and the attitude era in a attempt to get the gold from The Rock. Stone Cold said if he could do it differently he would have stunned Vince after, and I agree it would have added layers to the story.

Creative and one of my favorites because you never saw it coming, and didn’t want too. Left you confused and irked and desperate to see Stone Cold explain himself the next night.

PS – I do not intentionally ‘Top Post’ folks. I start a draft, work on the draft while working on other stuff, then post it when its done. Apologies to Bayless if it seems like I’m constantly stealing his BOD Update Thunder.

More MeekinOnMovies:
——————–
Watch_Dogs: 10 Reasons It Sucks
10 Gaming Franchises that Suffer from Extreme Overcomplication
Far Cry 4: 10 Essentially Features it Must Have
10 Video Games Ruined By The Hype
7 Great Games Playing Watch_Dogs Will Remind You Of