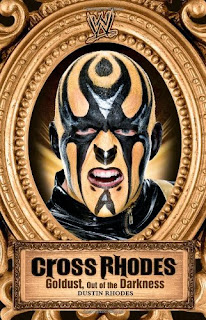 In keeping up with the current WWE product, and possibly one of its best human interest angles in a long time…

Dusty Rhodes was a larger than life wrestling icon. Some may deride his actual wrestling ability, but there is no doubting his star power and certainly no doubting his legendary abilities on the mic. In the 70’s and 80’s, you would be hard pressed to find a bigger star in the professional wrestling industry than Dusty Rhodes. And he would tell you himself. So one could imagine the pressure the fruit of his loins would feel following his father into his chosen field.

But while you may imagine it, you are not truly able to imagine it. You never went through it. You may think you imagine what its like, but until you have experienced it, you really have no clue what is actually going on. Dustin Rhodes “Cross Rhodes” is a interesting window into what was actually going on in the real life of two men who portrayed imaginary, larger than life figures on television during boon periods of professional wrestling. And both took very similar, yet very different paths that lead to varying degrees of success for each performer.

Make no mistake, as much as I am talking about big Dusty, this is very much DUSTIN Rhodes biography, very much his life story. I will actually get to Dusty’s in a couple of weeks, but for now, let us stick to Dustin’s book.

First off, let us dispense of the negatives. The book is extremely short…225 pages, in very large print, in a very small paperback. Those 225 pages also contain a whole heaping helping of black and white pictures. So there is not exactly a whole ton of material to digest here…it is just the facts Dustin Runnells is willing to share with us.

Also, a good chunk of this book is devoted to the personal life and demons of Dustin Rhodes. Those expecting an in depth breakdown of his wrestling career are sure to be disappointed, as there are huge chunks of it either ignored or described in a paragraph or two, plus Dustin’s memory isn’t exactly as spot on as some of us smarks are. The reason will soon become evident.

It was never easy for Dustin Runnells to grow up in the shadow of a larger than life living legend (not Chris Jericho). While Dusty was his father, and he was not a bad one, he was a vacant one. While young Dustin was growing up, Dusty was on the road 350 days a year, trying to become the biggest wrestling star in the world, trying to become the embodiment of what his gimmick was: The American Dream. But while Dusty Rhodes was trying to live and become The American Dream, his young son was experiencing the American nightmare. He saw his dad maybe a week a year. Things didn’t improve when Dustin’s mom divorced the American Splotch…I mean dream. It meant Dustin would see his dad even less. And even though it seems young Dustin was relatively well adjusted after the divorce, starring at his Texas High School as a football standout, young Dustin had a dream. He loved the chosen industry his father was so huge in. He had no illusions of a career in football, even though he was very good. University scholarship good. He was set to attend the University of Louisville, but before he could get there, he made a crucial life decision: he wanted to follow in Dad’s footsteps. Dusty was totally against it, but one day after Dustin’s High School Graduation, the elder Rhodes pulled his son aside, smartened him up to the industry, and sent Dustin to Skandor Akbar. Thus began Dustin Runnells 25 year run in the wrestling industry.

Dustin was trained in the old school way with old school mentalities…kayfabe and hard bumps to weed the weak reeds out from those who truly wanted it. Dustin survived, and was soon off to WCW as one half of a tag team with Kendall Windham. As a quick aside, Dustin truly was a natural, as his eventual WCW gimmick would portray him, and a lot of that has to do with Barry Windham taking to the kid and showing him the ropes. While Kendall, who was good but ridiculously skinny, would find some success in the industry, it paled in comparison to the game big bro and Dustin were bringing every night.  Even after the tag team with Kendall floundered and wasted away, Dustin came off scott free because he WAS a natural. There is a quick few paragraphs in the book about Dustin coming to the WWF in late 1990 to tag with his old man to square off against Ted DiBiase and Virgil. As a ten year old kid, I fucking LOVED that angle, and hated that it shot its wad at Rumble 91, but, hey, shit happens. By that point, the WWF was honing in on the LONG overdue DiBiase-Virgil storyline, so the Rhodes gracefully lost and bowed out of the Federation.

Big Dust was given the book almost as soon as he entered back into WCW. As detailed in another much derided book review, Dust entered as the rake and all the suit and tie wearing corporate big wigs were the leaves. Dustin entered into a feud over the US title with another up and comer you may or may not have heard of: “Stunning” Steve Austin. That feud put both guys on the map, as Dustin, for all the shit Scott Keith put him through at the time, was already a good, smooth worker, and Austin was right there with him. These two had crazy chemistry as well, but WCW was a total shit show by that point, so the two were separated into different feuds (I remind you, I am reviewing the BOOK, not the US title scene at that juncture). Austin got fired for an injury. Rhodes got fired because he bladed in a match where he was told to blade by the Turner officials yet told not to blade by Eric Bischoff. Figure that one out for me, and I will buy you a pimped out value meal from McDonalds.

So Dustin is out of his job with WCW…but he has started dating this smoking hot chick who portrayed Alexandra York on screen. Make no mistake about it, Terri was fucking HOT. She remains so to this day, in my eyes. Always loved her perpetually erect nipples. ANYWAY, Dustin started dating her, and his old man did NOT approve of the union. One day, Dusty and Dustin were supposed to meet up and play a round of golf. Teri was violently ill, so Dustin met his father at a grocery store and had to cancel the golf game to take care of his ailing wife. Dusty walked away, and the two did not speak for five years. Reading the book, it was not as if Big Dust was some uncaring asshole or Goldie was some unappreciative son. It was just something that happened between family members that caused an unimaginable chasm between father and son. All over an ill woman. Go figure.

So Dustin is estranged from his old man, and Vince McMahon calls. He has this character for the then previously always face Dustin: Goldust. Dustin accepts. Goldust is born. It was no doubt a rib, considering wrestling’s past with the Goldust trio meshed with DUSTy Rhodes. Supposedly, Dusty Rhodes hated the character with a passion. Allegedly. But Dustin grabbed that gimmick and made it his to take. Dustin Rhodes BECAME Goldust, and, let me tell you folks, as a young 15-16 year old buck, that gimmick WORKED. Dustin put his heart and soul into that shit, especially seeing it was the first time in his career he was playing a heel. He has lots of kind words for Scott Hall (being facetious here…Hall and the Clique HATED working with him…it is in the book) but, man, I can tell you first hand, in 1996, there was nothing quite like Goldust. Just an awesome gimmick. I know, I know I am interjecting my own opinion here, but can you deny the charisma, the awesomeness that character brought to a very stale 1996 WWF scene? To this day, on my semi-smart phone, the first music track I have on there is the Goldust theme. I am truly a loser like that.

Anyway…back to the review…

Goldust was probably the pinnacle of Dustin’s career…yet he was in the basement of life. Dustin was imbibing crazy amounts of alcohol and mixing it with crazy ass amounts of painkillers. By the time he became “The Artist Formerly Known as” Goldust, he had LITERALLY BECOME “The Artist Formerly Known” as Dustin Runnels. He was a mess, and, as a recovering addict, it takes a mess to know a mess, and Dustin was a MESS. Dustin, post 1999, kicked around a few promotions: WWE, TNA, WCW, everywhere. But it was not until he found his true home, a lil promotion called AA, when he truly became a man. He found it midway through the aughts, and has since become a better man who does not need his painkillers to sustain a day in this painful world.

All in all, Dustin Runnells book is a good read. As I mentioned earlier, it is a short and supremely easy read. But the messages he conveys are POWERFUL, none the less. I, personally, have been down to some of the depths this poor son of a bitch this guy has been down, and my father was not the larger than life character Dusty Rhodes is. While my father remains larger than life to me, Dustin Rhodes continues to confound continuity and the on screen WWE product, and bring quality programming that I am relegated to watch every week on Monday.

If only Goldust would stop touching himself. Seriously. Its kinda creepy. Ask the Rock at King of the Ring 2002.