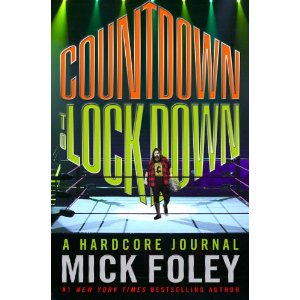 To quote the author, of all of Mick Foley’s memoirs, Countdown to Lockdown…is the most recent…

Mick Foley’s books are generally a cut above most other wrestling tomes, primarily because Mick writes them without a ghostwriter filtering what he has to say. Also, Mick is a college graduate who is very articulate and has a very good feel for wordplay. Don’t get me wrong, he is far from Tolstoy or Orwell, but in the spectrum of wrestlers who author their own memoirs, well, he is the closest thing to those great authors we are likely to see.

Countdown to Lockdown resembles closely the format of Mick’s previous work, “The Hardcore Diaries.” It is basically a journal of Mick’s thoughts detailing his run in TNA, and the buildup to his Steel Cage match with Sting at TNA Lockdown 2009. The journal entries are interspersed with full chapters describing some other life events from the mind of the man formerly known as Mankind.

Mick Foley is a pretty smart fellow, so he realizes immediately that a great deal of wrestling fans who are reading this book will not be very interested in, say, his missionary work in Sierra Leone, or his almost creepy infatuation with Tori Amos. To that end, Mick has included for each chapter something he calls the “Wrestle Meter.” Basically, each non journal entry, the actual chapters of the book, are rated 0-10 on this WrestleMeter, with ten meaning that the chapter is all about wrestling, zero denoting there is no wrestling content whatsoever. I am someone who enjoys Mick’s literary works more than most, so I have read the whole thing, but the meter does help a casual wrestling fan who wants nothing but wrestling content steer away from the other subjects and life experiences Mick describes. I would implore you to read the whole thing, but I would not begrudge you if you skip the chapters on, say, his missionary work (good stuff), childhood dalliances (getting a tattoo to impress a girl), or his infatuation with the music of Tori Amos.

As I mentioned earlier, this book describes the period of Mick’s life where he parted ways with the WWE and joined the roster of TNA. Now, I know many fans were turned off by Mick’s TNA run, and I don’t blame you. I am a HUGE Foley fan, and I wasn’t exactly inspired by Mick’s efforts there initially. But after reading the book and taking in to account everything that Mick describes, I find myself with a better understanding and enjoyment of his TNA run, via the benefit of YouTube. The meat and potatoes of the book are Mick chronicling his thoughts and psyche surrounding his angle with Sting, and the resulting match at Lockdown. Its different in the sense that this isn’t WWE Mick is talking about anymore. He describes how creatively vindicated he felt leaving WWE and crafting a storyline in TNA with one of his all time favorite opponents, Sting, including a now infamous (in some circles) promo where Mick Foley interviewed Cactus Jack. (Wrap your head around that one.)

Mick basically loved his time in TNA, but had one big disappointment. You see, Mick realized he was not the same performer he had been only a few years earlier, never mind his 90’s heyday. He has also stated in past volumes that he is a lousy cage match performer. So he approached the TNA higher ups with a concept for a different, custom made cage. No wire mesh, none of that. He wanted the old school big blue bar WWE style cage, but one fitted with platforms near the top where he and Sting could exchange a flurry of fisticuffs and, presumably, where Mick could perform a dive onto a prone Stinger. Well, TNA was going to try, but, alas, they couldn’t afford it and Mick (like every other performer not named Foley) would have to deal with the standard cage.

Along the way, we are again introduced to Mick’s family, his wife and children. There is a chapter in the book where Mick describes his family being filmed for a potential A and E series along the lines of “Hogan Knows Best.” Unfortunately, his family was a little too bland, didn’t provide enough fighting firepower. So Foley’s series was never green lighted, as A and E instead opted for “Billy the Exterminator.” The crazy thing about these chapters on his family is, as a longtime fan, realizing how old Dewey and Noelle are now, and the adolescent phase of their life that they are experiencing. There is actually one very uncomfortable passage where Dewey is going on his first date, and, with Mick driving him there, with Noelle in the car, Mick tries to describe the old “Yawn, throw your arms out, and land with your arm around the girl’s shoulder” move. Dewey counters with the “Dick in the Popcorn” gag made famous by Mickey Rourke in the 1982 film “Diner.” Noelle, blissfully unaware, asks both Pops and Big Bro what that exactly entails. Suffice to say, it is very awkward, especially for those who have kept up with Foley’s books through the years.

Now, while most of the book details Mick’s TNA run, there is also a good amount that describes the end of his WWE run. Namely, the chapters on Mick’s brief run as a color commentator on Smackdown. THIS is the true attraction of the book, as Mick was not thrilled with WWE’s treatment of him during this time period. Did I say WWE? Sorry, I meant VINCE MCMAHON. Most of us are privy to what happens on the announcers headsets by now. I mean, Michael Cole is basically Vince McMahon’s ventriloquist doll. Well, Mick spent a lot of time and considerable effort into preparing himself for this gig, taking it very seriously. He was having a fine time of it….until one night where Vince started screaming unnamed expletives in his ear and basically undressing Mick via the headsets…in the middle of a PPV. This chapter is powerful, and well written, as Mick basically describes the battle between literary folk heroes “McMagical” and “McFoley” , the chapter comically named “The Magical Headsets.”

Mick also relays a couple of chapters to the biggest, most horrific tragedy in wrestling history: The Benoit murder-suicide. Mick was having a particularly hard time finding flight and airfare to the Vengeance: Night of Champions PPV on June 24, 2007. Honestly, had Mick not mentioned it here in the book, I would have never remembered that he was in the main event of that show in a 5 way match. He relays that he said in the locker room that night that something must REALLY be wrong with Benoit if he misses a PPV. Hours later, he would realize how prophetic those words were, as he, along with most of us, soon realized the horror of what happened in Georgia. He writes a couple of chapters detailing the drug problem that has infected wrestling for years, but not in a traditional sense. These chapters might not be everyone’s cup of tea, as Mick tends to get a little preachy on this stuff (see Foley is Good) and he eschews what most people assume about the drug problem in wrestling. While he doesn’t dismiss it, he sort of plays devils advocate with the subject, stating in one breath that it is a problem, while outlining benefits and rationales for using painkillers and performance enhancers.

As a quick aside to the Benoit chapters, Mick also expresses his pure hatred of the Mr. McMahon death storyline. He basically echos my, and probably most reading here, frustrations with that insidious, stupid angle. He also gets the best description, from Vince himself, on the angle that best describes the vacuum WWE Creative lives in: “Mick, its not Vince McMahon who is dead, its MR.MCMAHON who is dead. Our fans will realize that.” REALLY? I am not even going to touch that, you, fair reader, digest that tripe.

By now, I hope I have given you a fairly good (and detailed…and long, I know I know) synopsis of Mick’s latest literary venture. But by no means have I given everything away….quite the contrary, I have left out a shitload of what is included here. As always, I just like to give people an idea, a taste, if you will, of what the full course is like. Countdown to Lockdown is a good book, but it isn’t “Have a Nice Day.” I think it is better than “Foley is Good” and right on par with “The Hardcore Diaries.” All in all, I would highly recommend reading it, and, after doing so, retrace Foley’s TNA run through the glorious resources provided on the internet. Its a solid piece of work from a solid human being.