“For The Man Who Has Everything” 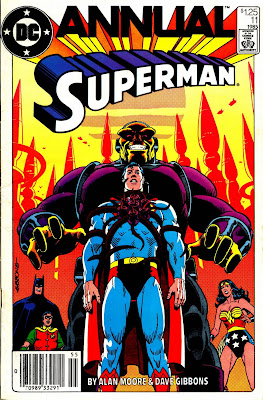 One of the greatest Superman stories ever written and a pre-collaboration of the future Watchmen team of Moore and Gibbons!
With the Man of Steel on its way this June 14th I thought I should showcase a few of the better Superman stories available. 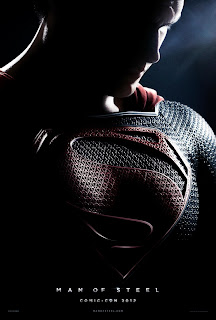 While I am not a big fan of Zack Snyder’s other films I don’t hate them either. I also am not sold on the Superman movies being dark like the Dark Knight films because I feel the Avengers showed you could make a fun action packed movie without insulting the fans. Nevertheless I do feel that the character will at least get a serious treatment and I have been waiting forever to see a Superman movie where he finally throws down with a villain and gets a proper fight scene. With the failure of Superman Returns to deliver on that front this might be our best shot to get that.
On to the comic!

Superman Annual #11
(W) Alan Moore (A) Dave Gibbons
Prologue:
Kal El is coming home to his wife and kids after a long day of work on Krypton.  He plans to read his kids their favorite story and then spend some quiet time with his wife. As he opens the door he is greeted by a surprise party celebrating his Firstday. Kal is happy.
In the Arctic Circle it’s February 29th and Wonder Woman is meeting Batman and Robin (Jason Todd). Wonder woman announces that she beat the Batplane in her invisible jet.  Batman introduces Diana to Jason who has just taken the mantle of Robin since Dick Grayson departed to become Nightwing. It’s unclear whether Diana kisses Jason on the cheek or is just talking closely to him but when she leaves Batman tells Jason to “think clean thoughts chum.”(I love it when writers realistically approach the reactions of the characters to the uber-hot women of comics.) 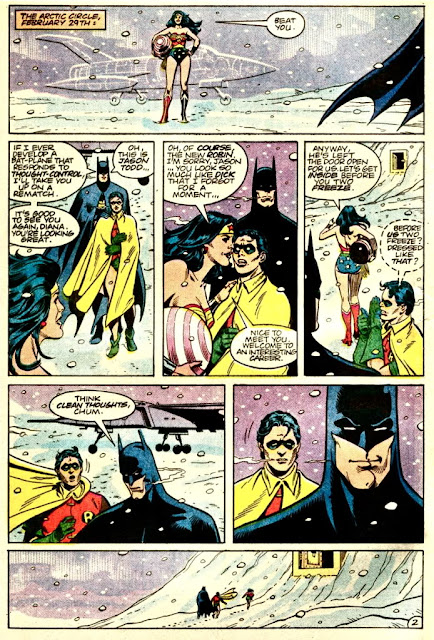 It’s Superman’s birthday and Batman asks Diana what she got him as a present. Wonder Woman declines the answer but Bruce reveals he has a new strain of rose that he had bred special called the “Krypton”.  As the three heroes turn the corner into the Fortress of Solitudes main corridor they find Superman standing with a strange vine strapped to his chest and a catatonic faraway look in his eyes. 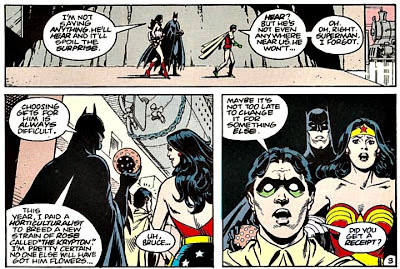 As the heroes take a closer look at Superman they see that the vines are growing into his body. Fearing that removing them will hurt the Man of steel, they try to find another way. Batman notes that Superman has no reaction to anything around him. “

“He’s in a world of his own.”
Back in Superman’s head, his party is over and everyone has gone home. Kal is distressed that his father Jor-El did not come to his celebration due to the fact that his political views do not match up to the rest of the family.
The next day Kal visits his father who admits that he is in support of The Old Krypton movement (an extremist political movement). Jor-El points out all the problems of the modern Krypton and how they need to enact severe actions to help it. Kal says that he understands its been tough since he was kicked off the science counsel because he was wrong about Krypton exploding, but that this isn’t the way. 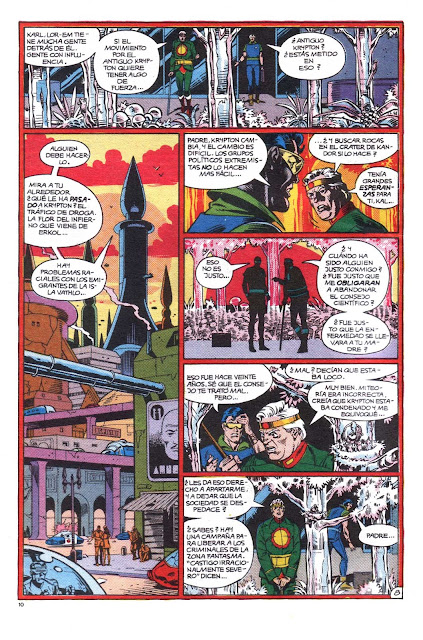 Back in the Fortress Batman realizes that the plant must have been a present from someone as discarded wrapping paper is lying just behind Superman.
The trio of heroes comes up with a narrative that possibly an alien race sent Superman a present not realizing how dangerous it would be to him.  It’s then that Mongul appears just behind them to let them know… “That’s exactly what happened… except for one or two minor details.”
Mongul reveals that the plant attached to Superman is known as “The Black Mercy” a symbiotic organism that drains the life force of whoever it attaches to. Mongul mentions it’s easy to shrug off for the individual but since it gives their mind whatever their heart desires the victim simply does not put up a fight. Mongul announces he’s the new manager around here and tells them that he understands on Earth people are separated into genders and age and asks if they could tell him who it would be polite to kill first? Diana and Bruce exchange a look and Wonder woman steps up and lands her strongest punch into Mongul’s chin. Mongul touches his chin as Diana holds her hand in pain. 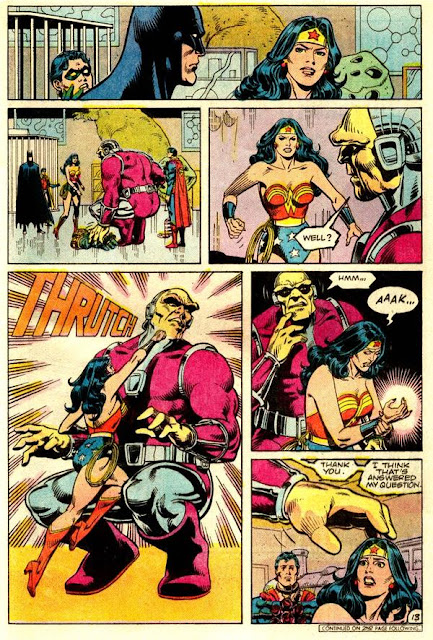 “Thank you. I think that answered my question.”
Kal is in the hospital as he is visiting his cousin Kara who was just attacked and nearly killed. Kara was attacked by a group who is in support of opening the phantom zone and letting all the criminals out. The group has a personal vendetta against the house of El as Jor-el was the one who invented the extra dimensional prison.  Kal takes his son Van on a drive to get him to Atomic city and away from any danger. While driving Kal gets caught up in a demonstration by the Old Krypton movement as they march down the street.  Kal comforts his son telling him it’s just a parade even though everything on Krypton is coming to a head between the politics of New Krypton and Old Krypton.
Diana gets punched through a wall by Mongul. The villain notes that he is surprised she is lasting this long, as she grabs a large blaster mounted on the wall. Mongul critiques that she should use the plasm disruptor as it is smaller and more befitting of a female. Wonder Woman tells Mongul to go to hell and pulls the trigger. Taking the blast full on the chest, Mongul merely smiles and grabbing Wonder Woman’s head and slams it into the wall. Batman and Robin work feverishly to find out how to wake Superman up as he is the only one that can go toe to toe with Mongul. 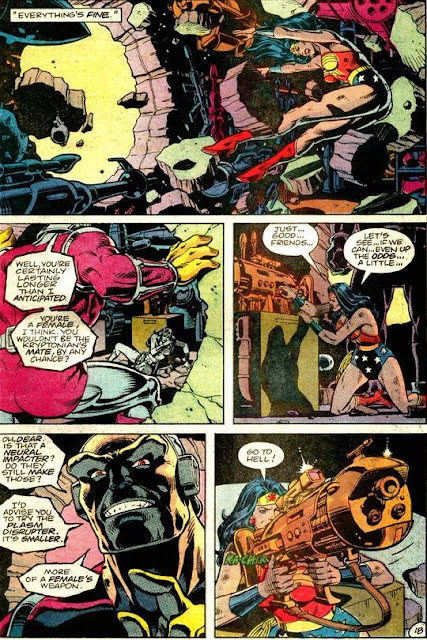 Jor-el stands at a podium and incites his followers to riot against the New Krypton group and all hell breaks loose while Kal drives away and takes his son to Kandor crater so he can process everything. Taking his son outside he explains that he has a strange sense. Kal remembers his son’s birth and every year of his life on Krypton but for some reason he is getting the nagging feeling that none of it is real. 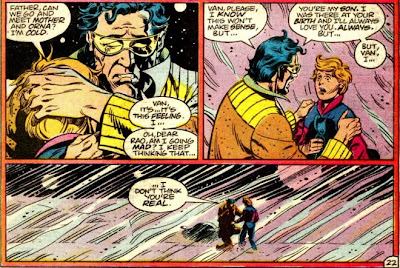 Batman can see a tear in Superman’s eye as he has a distinct feeling that he is fighting it. Getting the large gloves that Mongul had been wearing, Robin brings them to Bruce. Batman starts to see the vines untangle and forgoes the gloves to rip the plant off of Clark. At the sime time in his own mind, Kal is trying to reach his son to hold him one more time even as he is starting to realize he is not real. Pulling the vine off of Superman, Batman is attacked and wrapped up into it. Bruce is now back to his childhood and when Joe Chill fires his gun the bullet misses the Wayne’s as his father Thomas fights off the criminal. 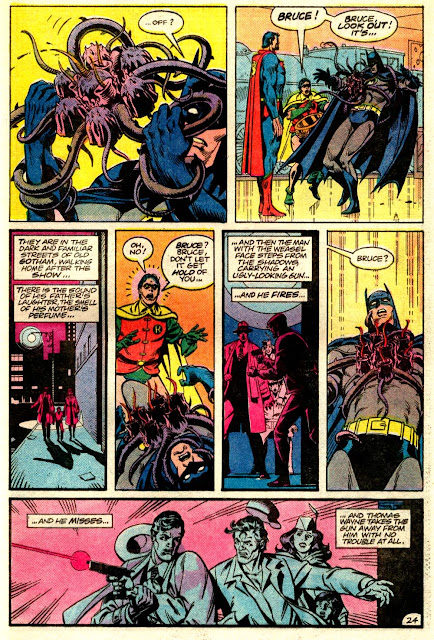 Superman comes to and asks Robin who is behind this. After Jason tells him it’s a big yellow guy Kal realizes who and shouts out the villians name as he flies in a blur. 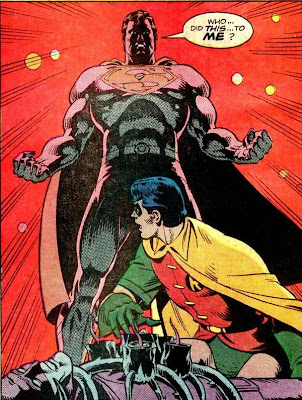 Mongul who is in mid punch of a continuing pounding on Wonder Woman’s face turns his eyes behind him and realizes the s--- has hit the fan.
Robin, using Moguls gloves, struggles but ultimately gets the vines off of Batman. Superman meanwhile bust through the wall and slams Mongul headfirst into the wall. Superman commands for Mongul to stand up as he wonders aloud if the villain knows what he did to him? Perfectly responds Mongul as he backhands Clark. Superman is sent up through the floor above and lands in his alien zoo. Climbing up through the hole, Mongul explains he gave him a prison that would not let him out without giving up his heart’s desire, which must have been like tearing his own arm off to escape. Superman says one thing to the villain with a snarl! 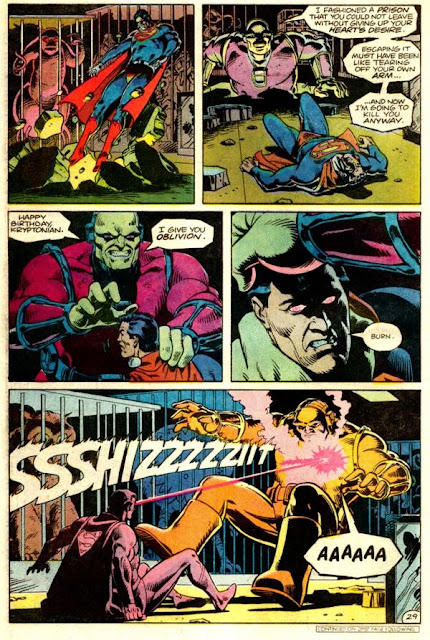 Superman unleashes heat vision straight into Mongul. Mogul double axe handle punches Superman as he screams the Superman actually hurt him. The two charge against each other and as Mongul lifts the Kryptonian, Superman fires another heat blast that sears into Mongul’s arm. Mongul punches Superman through another wall and jumping through he stomps on top of the heroes and smashes him down through the floor of that room. As they fall Kal twists the alien in midair and slams him onto the ground as he begins to pound the yellow alien in the face with everything he has. Something catches Clarks eyes however and he stops for a split second as he sees a statue of his mother and father and is taken back to what he had and what he lost. 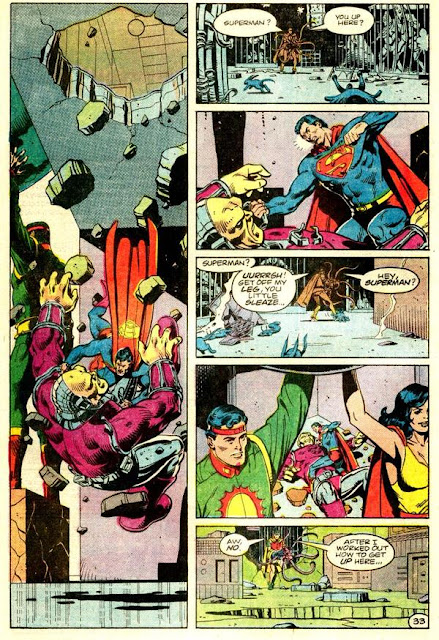 Mongul uses this moment of hesitation to punch Superman off of him as he notes that Superman would have killed him with one more of his punches, but now he is going to finish the man of steel of instead. 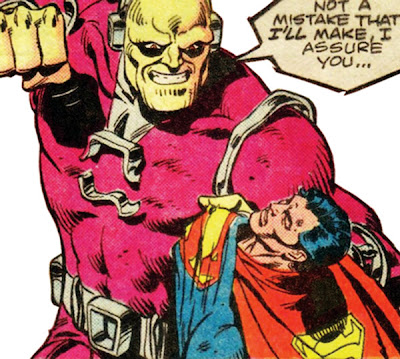 Just then Jason drops the plant onto Mongul and it wraps him up. 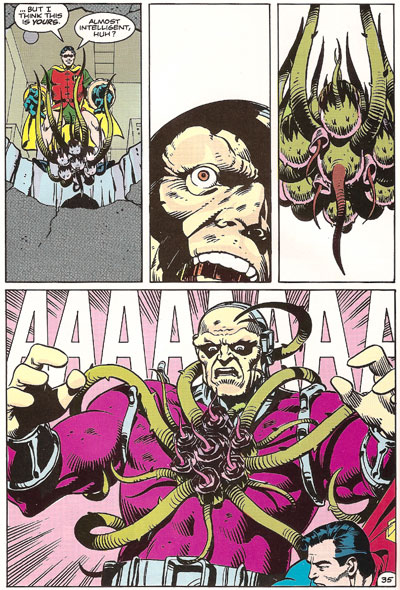 In Moguls mind he sees himself disintegrating Superman with a blast from his chest ray. He then gets a pike and puts Superman’s head on it and marches out to conquer the world. In the real world Superman notes that it’s over to Robin as they both watch Mongul on the ground and in dream land.
After the heroes recover, Wonder Woman hands Superman his present and exact replica of the bottle city of Kandor. (Kandor was the capital of Krypton and was shrunk and kept by Braniac long before Krypton blew up. Superman recovered it and for many years tried to bring the city and its inhabitants back to normal. Eventually he did just that and put the Kandorians on another planet. He made a replica of the city for himself and then another group of aliens fleeing their homeworld moved into the replica! You gotta love the Silver Age! Anyway I explained that so you get the effect of what happens next.) Superman using super speed dashes away and stashes the city and is back to accept Diana’s present because y’know, he doesn’t already have a tiny city. Superman hugs Diana and they both wonder why they don’t do that more often. Then Wonder Woman states it would be too predictable. (Alan Moore gets some good wink and nods in this comic for the long time adult fans.) 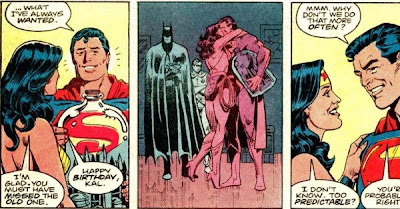 On a personal note you may have noticed I haven’t posted in a while. A month ago I had a death in the family that kind of shook me. In addition I am trying my hand at novel writing again. After three failures I still can’t get rid of the bug to write. So while my input on the web will be less (hey stop cheering so loudly!) I am most certainly not going away.
Also as many of you know Peter David suffered a stroke recently. Every article I write is going to have a link to a page where you can help Mr. David. I hope everyone can spare at least a dollar to get one of the greatest comic writers of all time back on his feet. 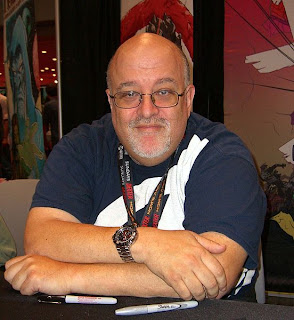