Skip to content
All New X-Men so far (is it worth buying?) 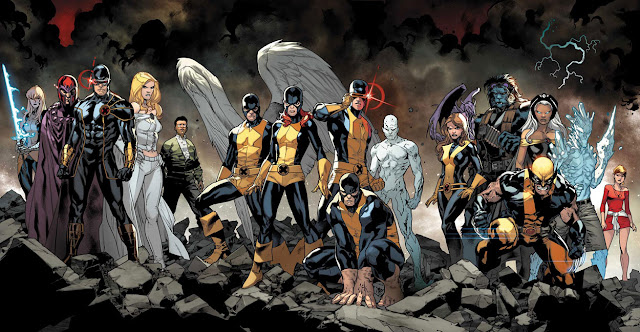 The X-Men were what got me started buying comics on a regular monthly basis. In the years since I started reading the mutants adventures I have seen many series come and go. Even now I can’t name all the X-Series or even what they do different from each other . Back in the old days you knew that X-Factor was where you got the original team, and Uncanny was where you got the newer characters. New Mutants was where all the young mutants were showcased and then the 90’s hit and the s--- exploded!

You had the Gold team in Uncanny 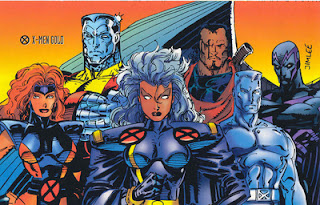 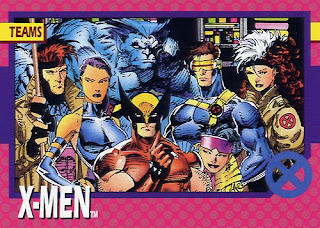 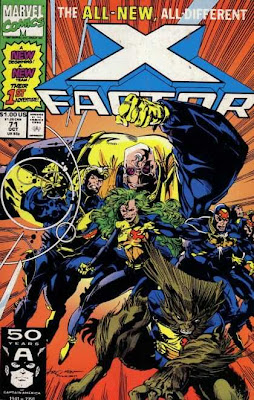 X-Force from the New Mutants 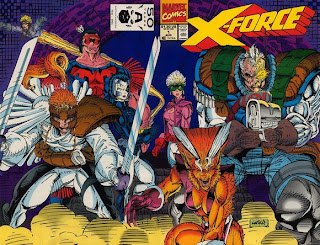 And Excailbur that just seemed to exist on its own. 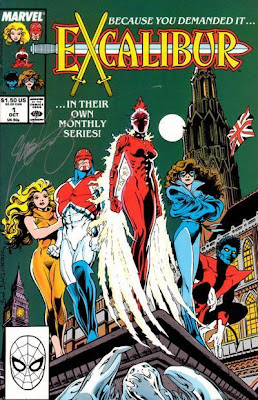 Soon those titles were joined by Generation X and then X-factor was canceled and replaced with Mutant X. Cable got his own comic and then during Age of Apocalypse he was reverted to a teenager named X-Man and then when we got back to reality he was brought with us. So X-Man was an offshoot comic from an offshoot comic that itself was an offshoot from the X-Men.

I read the Kieron Gillen run during the end of the uncanny comic and the beginning of the first reboot. Before that I read the Mike Carey run and then before that the Joss Whedon and Grant Morrison runs and on back to Chris Claremont. So give or take the odd year here or there I have continually followed an X-comic one way or another since 1991. The best to me are still the Claremont issues and the worst by far are the Chuck Austen ones, but I always look for something with an X on it to to buy. (Insert porno mag joke here.)

Now with Marvel doing what their calling NOW! that’s modeled after DC’s new 52 it has opened up the possibility for me to pick and choose which series to start reading again. While the differences between the titles still elude me, one title stood out as being something different.
All New X-Men
Is a series where the original Lee/Kirby team of Cyclops, Marvel Girl, Iceman, Beast and Angel, are brought into the present of the Marvel universe where they find that their future is gone horribly wrong.
Two things made me choose this X-title from the rest.
The Beast is mutating again. Only this time the mutation is killing him. Hank is resigned to his fate, but before he kicks the bucket he wants to do something that will make the world a better place, it’s then that Storm contacts him about a situation. 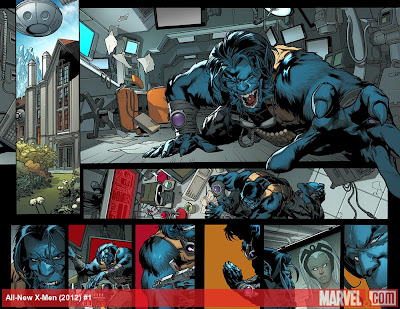 A young girl gets into an altercation and her mutant power manifests. The young female mutant is visited by Cyclops, Magneto and Emma Frost. Scott explains to her that he has a lot to atone for, and that he wants to start by helping her, he asks her to join him and after she accepts, the three mutants slice through the government soldiers surrounding them like a hot knife through butter. 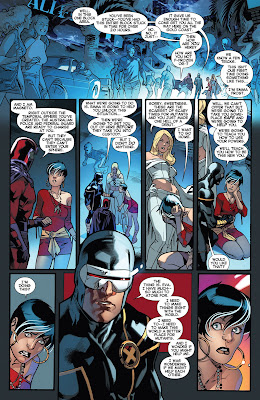 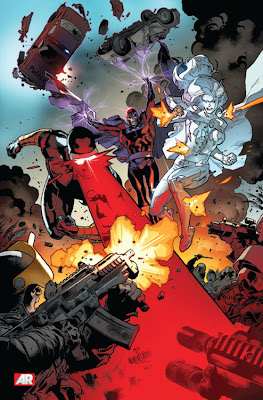 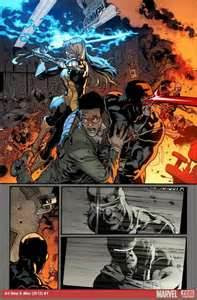 Beast, Storm, Headmistress Kitty Pryde and Iceman watch the fighting on the news and they feel that Cyclops is completely over the edge. (Spoiler, at the end of AVX Cyclops was possessed by the Phoenix force and he killed Professor X ) Iceman makes the offhand comment that if young Scott could see himself now, he would kick his own ass. Beast excuses himself.
In the past the original five X-Men are arguing and on the brink of breaking apart when the modern Beast all blue and furry shows up to recruit them. 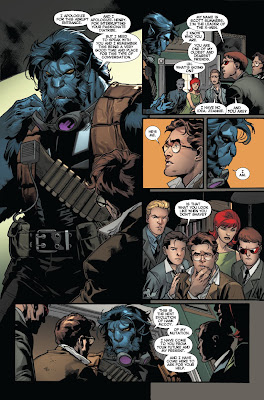 Plus Column
Everybody knows how good Bendis is at dialogue, even his detractors have to agree to that. I mean sure he has too many characters talking like teenagers at times, but in this case when the main stars are teenagers, it works really well. Seriously if you love the Whedon dialogue of his Astonishing X-Men run, then you will feel like you’re hearing the same voices from this comic. Character moments are at an all-time high, this is not the plot driven book of 90’s X-books.

Minus Column
Bendis’s slow build is in full display here. When reading in a trade you don’t notice it as much but in a monthly book you finish it and you get a feeling like you’re on a diet and you only got one bite of your favorite food. The book is bi-monthly at the moment which helps, but at $3.99 a pop I’m essentially paying 8 bucks plus tax for the content of most other single comics. 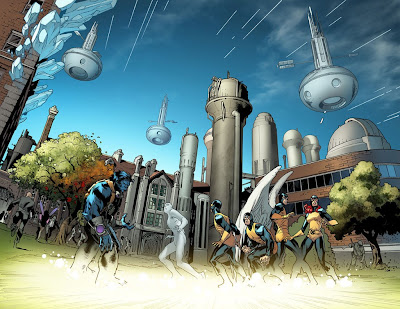 As the story continues the original team travel to the modern times and Wolverine attacks them and gets put down by young Iceman and Cyclops. The reaction of Bobby (Iceman) with his young and older self is hilarious and makes perfect sense for the high strung character. Beast passes out from his mutation and everybody calms down and after getting blue Hank into the infirmary they realize what he already knew, that he is dying. 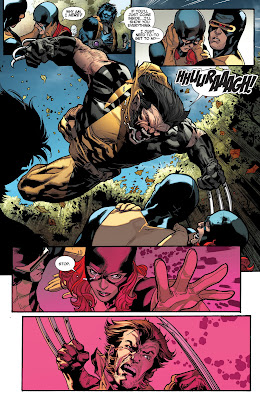 Logan orders the “little X-Men” to go back to their own time and Jean Grey who has just manifested her telepathy (originally she just had telekinesis) puts Logan to sleep.  The original team take the modern Blackbird and fly off to confront modern Cyclops and his group.

Plus column
The reactions of the characters to are really well done with Logan still in awe of Jean from the days when he was in love with her. Also the original team seeing Cyclops teamed up with Magneto their sworn enemy is also a moment that you can tell from their perspective would be like seeing Winston Churchill teaming with Hitler.
In a flashback sequence we see Cyclops and Magneto rescuing Emma from captivity and realize that Scott’s powers are amped up and uncontrollable since he was possessed by the Phoenix force. His powers cause more destruction then he had planned in the rescue mission and again makes him look more and more like a villain. 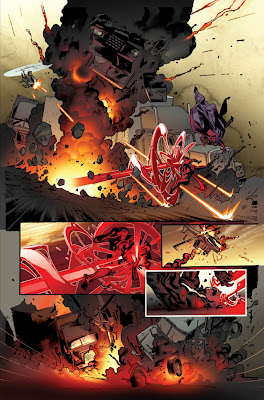 Scott claims that he did not kill Xavier, that it was all the Phoenix force, but how can he possibly explain it to everyone? Magneto points out that there are ways to fix things, though with Magneto the cure is sometimes worse than the disease.  Magik (Colossus’s sister) is a part of the team and after her encounter with the Phoenix force has complete control of her magic abilities and teleporting power. It’s mentioned that they do not know where Colossus is, but Illyana (Magik) also says that when her brother finds out what happened to Xavier, he will kill Cyclops. Scott’s team finds another mutant to rescue and as they arrive they come into direct contact with the original team. 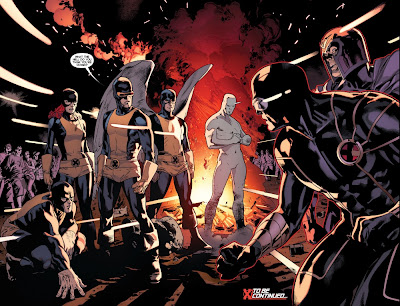 Minus column
Bendis has yet to get Emma Frost’s voice correct. Though to be fair other than Grant Morrison who really has? 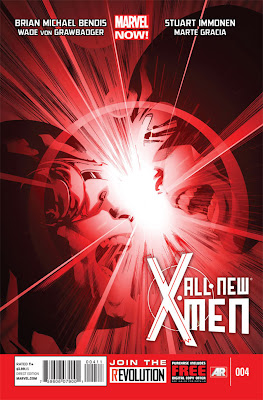 Issue four is the weakest installment in the series but with the coolest cover, go figure.  The Original team goes into direct conflict with Scott’s team and we get some cool action but it’s really just sampling as Magik takes her team out of the action. 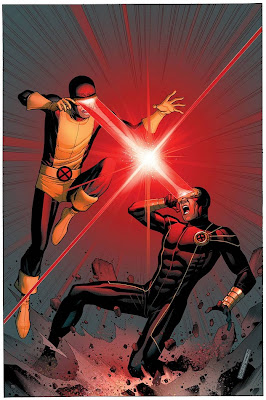 Jean lashes out like a teen girl when she gets a wave of emotion and thoughts from modern Scott. 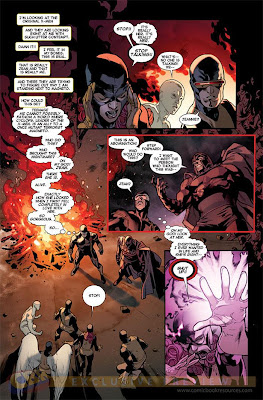 The new mutants just brought into the fold are showcased a bit and Jean’s mind goes on overload as the team retreats back to the Mansion. 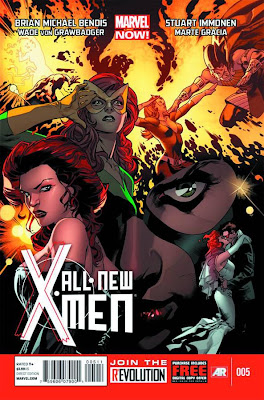 Modern Beast is dying and his young counterpart and Jean are attempting to cure his mutation. Using her telepathy, Jean links the minds of the two Beasts and sees glimmers of her future. 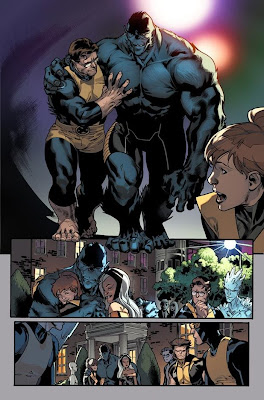 Hank gives her a full look at her future and anyone who has followed X-Men knows she has had quite tumultuous existence. 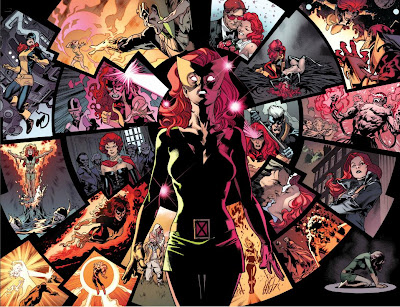 After her preview of her future, Jean takes the leadership role in her team just as young Scott is feeling shaken after meeting his future self. 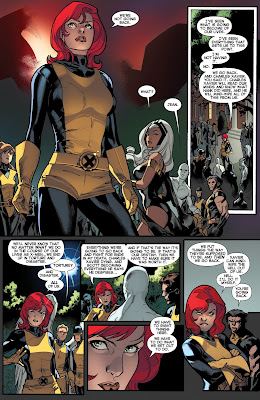 Jean decides that the team will stay in the present until they fix the problems of the mutant revolution that modern Cyclops has started. 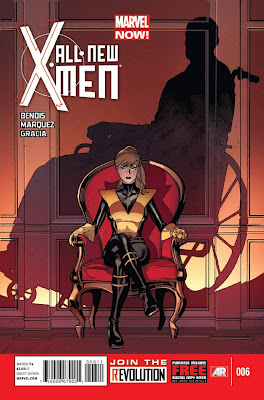 Issue six sees Kitty Pryde, the once young teen sidekick on the group mentoring the young Jean whom was one of her mentors. (Jean picking up stray thoughts from others reactions to her compared to what they are saying is really great!) 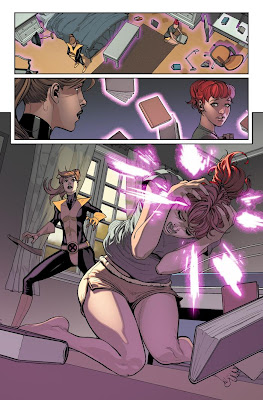 Cyclops runs off, not able to take the stares of the other students at the school. Exploring the modern world he encounters many things not from the past with hilarious responses.(phones that can do everything to bottled water and magazines being expensive.)
“Five Dollars?! For a Magazine?! This place is a nightmare.”
Young Scott encounters Wolverine who makes it no secret that he feels Cyclops is a murderer who needs to go back to his own time. Cyclops blasts Wolverine and rides away on Logan’s bike.
Mystique watches tape of the incident and sees young Scott. Gathering an unknown group together she makes plans for an encounter. 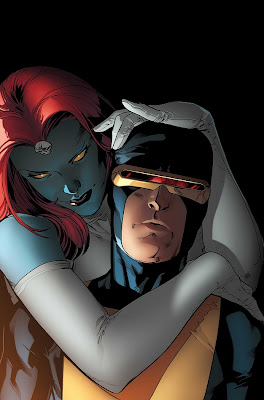 Plus Column
The original team and Jean especially are getting the best characterization that maybe they have ever had with this series. Instead of just portraying them as your average teenagers or as the cardboard characters that Stan Lee wrote them to be they have real voices. They are smart, dumb and just real!
Minus Column
The comic follows both the original team as well as Scott’s team. The new recruits, while interesting characters, feel like added elements not necessary to the story. It’s obvious they are building to something, and the relaunch of the Uncanny X-Men series will most likely play out that story line more from that angle. For the moment it just feels like it’s too much in an already slow moving comic.


I know I stated this before but it bears repeating, I am paying 8 bucks plus tax for a story still moving extremely slow.  Young Scott would be horrified! Even $3 per issue would be easier to swallow.
In closing I feel the sixth issue was the best of series by far. We are getting teenage angst, personality clash reversals and character development on a Grand Master level. If they keep this up it could potentially become my favorite current comic.

Despite its shortcomings, I have actually become attached to these X-kids and I’m extremely captivated with what they are going to do next.

This comic is perfect for both newbies and old school fans. If you know nothing you can follow five X-Men that are almost continuity free as they react to a world they know nothing about. For old fans like me, it’s great to get all these reactions that reflect the moments from the past between the personalities.