Skip to content
Wrestling Comics! (Why they suck and how to fix them) 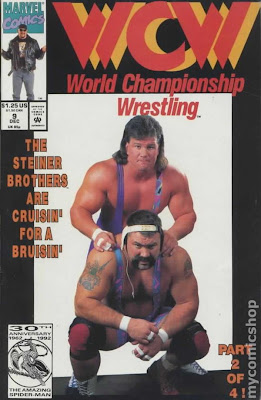 Wrestling in comics is not a new concept. For many years the two forms of entertainment with some of the most loyal fans of any have been combined in many ways. If you think about it, it really makes a lot of sense. Both wrestling and comics feature epic battles, outlandish costumes and arresting characters. So then why do the combinations fail more times then they work?

Marvel Comics tried their hand at wrestling comics in the early 90’s. The creators were given carte blanche as the entire roster was made available to them. How did the writers handle this? Let’s read the synopsis of issue 3 according to comicvine
World Championship Wrestling #3 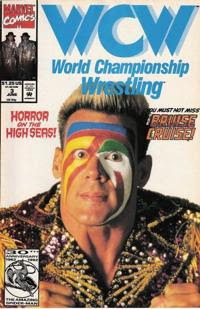 Sting takes a trip on a cruise ship and is attacked by Tracy Smothers and Steve Armstrong, The Young Pistols, who have been paid to try to injure the WCW superstar. 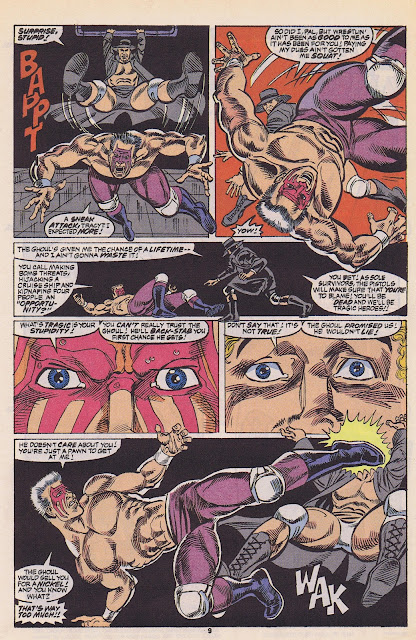 Ok so Sting is on vacation? It’s the third issue and the creators felt it was time to leave the ring already? Why is it a crime to show in ring action?

World Championship Wrestling #12
Actually Valiant comics came out with their comic series first. A WWF liscensed comic called Battlemania. Again much like the WCW version I can’t find much in the way of story plots so we will just have to do our best with what we have.
WWF Battlemania

Chaos Comics came in during the attitude era and had several series created. And much like Russo in that era the creators were all like, “screw this wrestling s---!” 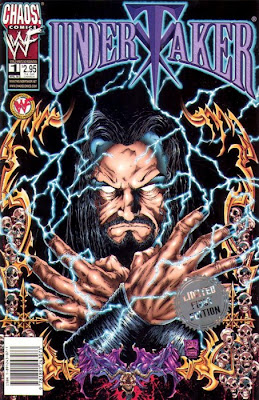 The headliner of these comics were the Undertaker issues. With the exception of Royal Rumble 94 nothing could have prepared us for this.

Text from Wikipedia
“The Undertaker was revealed to be the ruler of ‘Stygian’ a plane known as Hell’s Prison Realm, where the worst and most deadly and evil of souls are remanded after Death. The Undertaker was both its ruler and its warden. According to the story, the Undertaker had ruled Stygian for untold ages, and would have continued to do so if not for the invasion of a druid named Augustus, who also called himself The Embalmer. Gaining entrance to Stygian, the Embalmer battled the Undertaker, intent on claiming three books which contained a prophecy by a being called the Death Scribe. This prophecy claimed the Undertaker would at some point consume all the power contained within these three books which were claimed to have a history of the future, as well as several unholy spells, and arcane procedures which resembled the Frankenstein monster, one of which is later used in the story, written before recorded time by the Death Scribe, in addition to the prophecy.” –Okay I’m going to stop there. That makes the plot of Lost seem a little too simple by comparison.
And really they looked at a wrestling ring and said, “nah that’s some b-------, but how about this!”
Stone Cold also got the Chaos treatment. 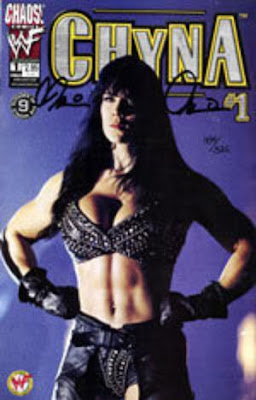 In Japan they decided to showcase life imitating art with Tiger Mask. Tiger Mask is about a feared wrestler in America who comes back home to Japan. Befriending an orphan boy who came from the same orphanage that he grew up in, Tiger decides to turn face to give him a good role model.
New Japan hired Satoru Sayama and dressed him up as the Tiger Mask character from the comic. 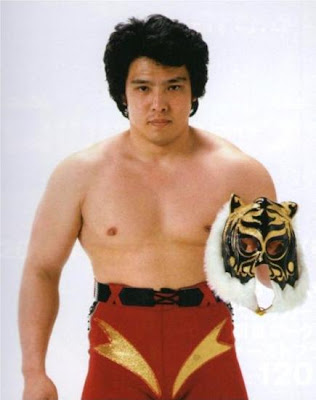 At first the Japanese crowds viewed this as being too wacky of a concept for it to work.

Everyone came around when Sayama tore the house down with the Dynamite Kid in the first of what would become a series of battles between the two.
Why didn’t any of the American wrestling companies think to do this?
The comic companies are missing the point entirely. Instead of taking the look of the characters and doing whatever the hell they want, the publishers might want to look at the reality behind the costumes.
Example:

A young wrestler trying to break the glass ceiling of the promotion starts to perform more and more dangerous and treacherous moves. The matches bring him to the attention of the CEO of the promotion who gives him a shot at the belt. The wrestler is ecstatic that his dreams are coming true but is in so much pain from his previous matches he needs to start taking more and more pain pills to get through the matches. Eventually he becomes addicted to the drugs and they destroy him along with his career. The wrestler hits rock bottom (no pun intended) and begins to work his way back into wrestling and then back up the ladder. Nobody believes in him, everyone calls him a junkie and on some days the man doesn’t even believe in himself. However the wrestler is determined to prove that he is better then what everyone thinks and strong enough to get back to the top of the promotion without falling off the horse again. Can he?

That’s a classic redemption story that I threw together using Jeff Hardy, Eddie Guerrero and countless others that have experienced the same or similar in their lives as inspiration. I would read that and I’m not just saying that because I wrote it. It’s a compelling narrative that focuses on the man beneath the costume with the action secondary to the character, just like a good superhero story!

Will publishers ever realize that, what makes a good story with superheroes would also work with wrestling?

Until then we are stuck with this. 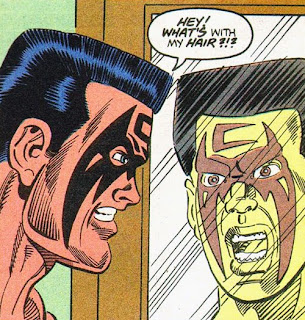