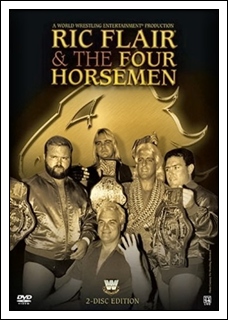 Disc 1
Before we get started, let me just say that I predict that by
the end of 2013, Dusty Rhodes will retire.
I love documentaries, I love wrestling. So when the two go hand
and hand and are done right, there’s really not much else I’d rather be
watching. This documentary is perhaps the shining example of a documentary done
right. They go over all the high points, we hear from every major player, and
you’re never left wondering “well, what about such and such.” It rings in
around an hour and a half, but it flies by. Every morning when I start my day,
I fire up the laptop, and put something on the TV. For the first four days
after I bought this set, the documentary was the first thing I’d put on because
it was that good. Plus, we get to hear from Paul Roma; that’s reason enough,
baby.
The extras on the disc are additional stories, with my favorites
being Tully talking about a college kid they met while on tour who showed them
a Rolex that he spent his life-savings on so he could be like the Horsemen. JJ’s
pre-War Games match is awesome as well, total classic heel work here.
Also, what’s an odder piece of merchandise; JBL fishing lure, or Horsemen Vitamins?
Disc 2
Arn Anderson, Ole Anderson & Ric Flair vs. Pez Whatley, The
Italian Stallion & Rocky King – NWA, June 22, 1985
The DVD menu says it’s Tully Blanchard with Arn and Ric, instead
it’s their cousin Ole. I’d love it if the WWE or TNA did a show with a small
studio audience inside a TV studio like the old JCP shows. It would definitely
be a different look and feel compared to today’s programming. As for the match,
I was expecting a squash, and got quite the opposite. In typical Flair/Horsemen
fashion, they went in with some nobodies, but did their damnedest to make the
guys look good even when losing. It’s truly a lost art. There’s nothing really
too great to speak for in this match, just an average JCP bout.
Flair slaps the Figure-4 on Rocky King for the win at 11:27 | **
Ric Flair [C] vs. Ricky Morton – Steel Cage Match for the NWA
Championship – The Great American Bash – July 5, 1986
This is the match where Flair arrives in a helicopter. I love
that they roll out the red carpet for him, as small touches like that give a
match a big time feel, and let you know this guy is the CHAMPION. This was set
up after the big attack on the R&R by the Four Horsemen in the locker-room,
where they busted up Ricky’s face and rubbed it into the locker room floor.
Ricky’s wearing the face-mask, which soon makes for great heel-fodder, as Flair
begins to dissect Ricky’s bandages, and parades around with the mask on. Morton
is selling on a Mr. Perfect level here tonight, but it’s believable due to how
much a broken nose hurts, plus it really ramps up the sympathy. This match is
classic Flair and NWA in the mid- to late-1980s. I was really getting into it
near the end, and would have liked to see it go on for a little while longer,
as Morton looks like he was just settling into some extremely violent behavior.
Flair pins Morton while his feet at 23:17 | ***3/4
Dusty Rhodes [C] vs. Tully Blanchard – First Blood Match for the
NWA TV Title – Starrcade ’86 – November 27, 1986
It’s weird, on one side of Dusty’s head he’s written “Tully”,
and on the other…I can’t make it out, but it looks like “slut”. He’s playing
some odd head games. Before the match starts, Tully tries to get away with wearing
wrestling head gear, which they say no way to. I love heel tactics like that.
Dillon tries to mouth off to Dusty, which only gets him a Bionic Elbow for his
troubles, splitting him open. Great stuff so far, but this is how Dusty’s
matches always go for me; great beginning, and the rest is terrible. Geez,
Tully stalled for so long, and the match took so long to get started I thought
perhaps I accidentally paused the DVD. The beginning of this match is where all
the entertainment is, and thankfully it didn’t go for 20 minutes. Tully
basically avoids Rhodes for the entire match until they trade a few blows, the
ref is knocked out, Tully bleeds, but then gets fixed up by JJ and busts open
Rhodes with a roll of quarters just as the ref comes to.
The ref believes Rhodes to be the first one bleeding and awards the match
& title to Tully at 8:39 | *1/4

No shock that this is another great promo from Arn.

Showcase Showdown: A damn
fine set, really. I think we were short-changed with just two discs though.
There’s a million more matches, moments, and promos that we could have seen.
However, the first disc is awesome, and one of my al-time favorites. The
documentary is almost 2 hours, covers everything in detail, and leaves you
wishing you could have been part of it all. The loyalty, camaraderie and
respect for each as well as the business really shines through. Best of all, we
get to hear from Paul Roma! It really makes you wish there were more official
releases where wrestlers would talk s--- about one another, it’s hilarious. In
the end, this is a set I’d make sure to grab if my house were on fire, if for
the documentary alone. It’s only $6, brand new on amazon, you can’t beat it.

Thanks to my editor, Steven Ferrari. There was a time once when I was out scouting on the remote ice planet known as Hoth. Well, as luck would have it, I was captured by a monster and my Ton-Ton was killed. So, after I escape the monster’s cave, I collapse in the blizzard. Steve shows up, his Ton-Ton dies, he cuts it open with my light-saber, and shoves me inside to keep me from freezing to death.

For any and all things Caliber, follow the links…
Str8 Gangster, No Chaser – Recently updated with 12 Reasons Why Die Hard Is The Best Christmas Film Ever, Man Movie Encyclopedia – American Ninja, and a ton of great stuff from the last 3 years. Throws all other websites right out the window for having no ticket.
WCW In 2000 – Recently updated with a Monday Nitro that features the 6th and 7th title change in 22 days.
The Man Movie Encyclopedia Vol.1 – My book. Has an average rating of 5 stars, endorsed by Scott Keith & Maddox, and even fellow Bod’ers themselves have given it the thumbs up.
Caliber’s acoustic hip-hop – I thought I’d include this for the hell of it. I’m a musician as well, who created a style of music that’s mostly acoustic hip-hop. I also have some songs where I just straight up sing. Honestly, it’s pretty good stuff, I think you’ll be surprised.

[email protected] – mailbag, or requests, just let me know there. Or the comments section if you prefer.