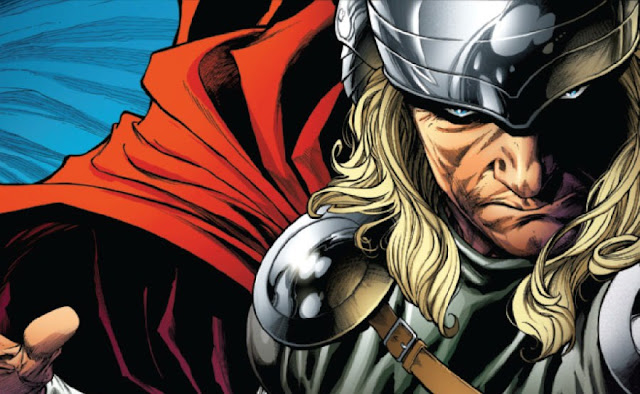 Powers/Abilities
Near Invulnerability, Keen senses, superhuman speed and strength, Godly stamina, regenerative powers using his Hammer Mjolnir, Can summon lightning, weather and rain. The hammer also enables flight and the ability to fire a “Godblast” He also has a belt that doubles his strength.
Thor is a master of hand to hand combat and adept at various other striking weapons.
Biggest weakness:  Different iterations of Thor’s have been different but most of the time if Thor is separated from his hammer (Mjolnir) for different periods of time he can transform back into his human alter ego.
Notable victories over
The Hulk
Silver Surfer
Hercules
and kills more Frost Giants then Colonial Sanders kills chickens
Background: I’m pretty sure everyone knows Thor. He’s the God of thunder and the son of Odin.
Gladiator (Kallark) 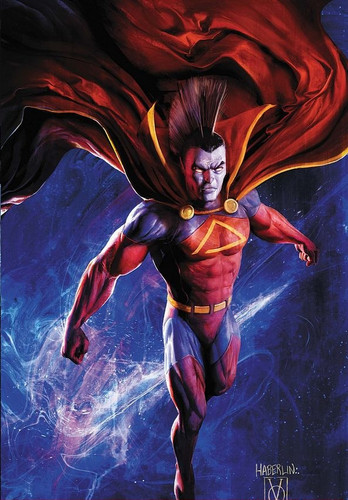 Height
6’6
Weight
595
Powers/abilities
Superhuman speed, agility, reflexes, and durability.
Heat vision, super/freeze breath and flight.
Biggest Weakness: All of Gladiators powers are confidence based,  meaning if he believes he can do it he will, but if he begins to doubt and is not given time to recover in some instances he can be beaten.
Notable Victories over
Colossus
Wolverine
and the Fantastic Four (Yes! All four at once!)(That’s what she said.)
Background: Gladiator or Killark is essentially the Marvel Superman. He’s from a super powerful race known as Strontians and is the leader of the Imperial Guard for the Shi’Ar Empire.
But first a pre-lim
The Sentry (another Superman/Marvelman anologue) 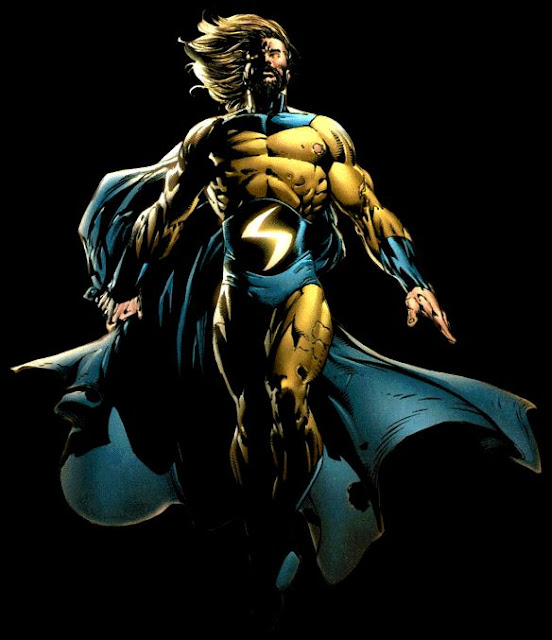 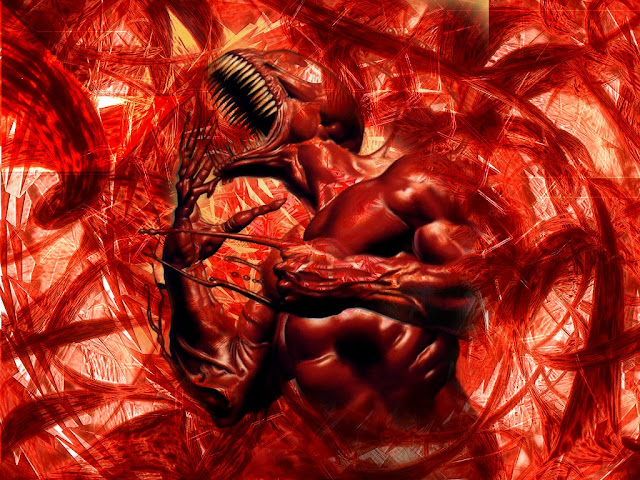 Thor encountered a Gladiator from an Alternate Universe in Fantastic Four 339. 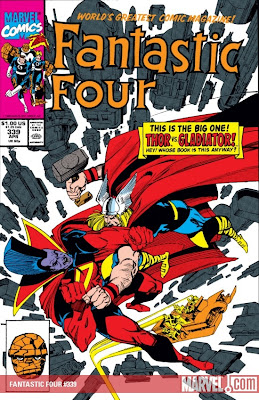 But the first time that Kallark of the 616 universe encountered the power of Thor he came up against the Avengers in the Mighty Thor 445. This was during the time that Eric Masterson who would later become Thunderstrike, had the power of Thor. Eric Masterson was a Thor who was more a regular guy then a God and he didn’t have infinite confidence in himself. Thor 445 was during the Galactic Storm crossover that was the Kree heroes versus the Shi’Ar heroes versus the Earths heroes. 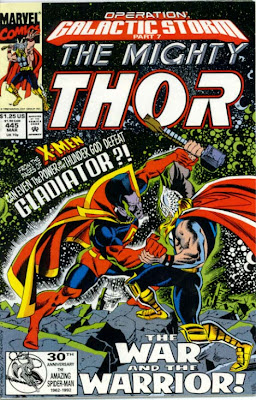 (W) Tom Defalco (A) Pat Olliffe
The battle starts with Kallark floating above a destroyed settlement and as these things always go, he mistakes the Avengers as the ones responsible. Wonder Man (Simon Williams) is the first the encounter the powerful Alien. Wonder Man flies in with a jet pack and Gladiator heat visions the pack to molten slag. 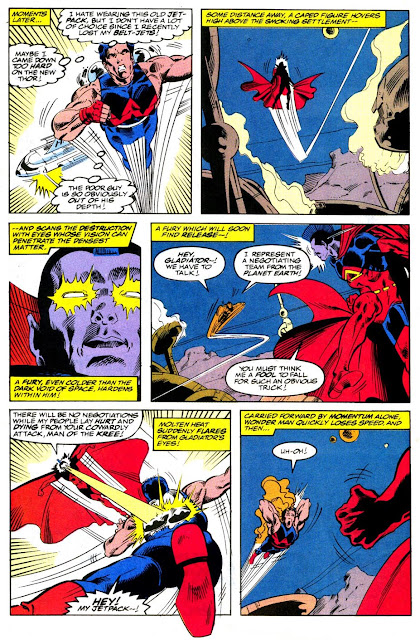 As Simon’s momentum carries him forward, Kallark punches him into the ground. Williams recovers much to the surprise of Gladiator and the alien streaks in for a punch and Simon retaliates by knocking Gladiator into a mountain. Gladiator has a “didn’t hurt” look and uses freeze breath to put Wonder man in a block of ice. Simon breaks the ice and frees himself but the Imperial Guardsman decides that play time is over and rains down hammer-fists upon Wonder Man, embedding him deep into the planets core. 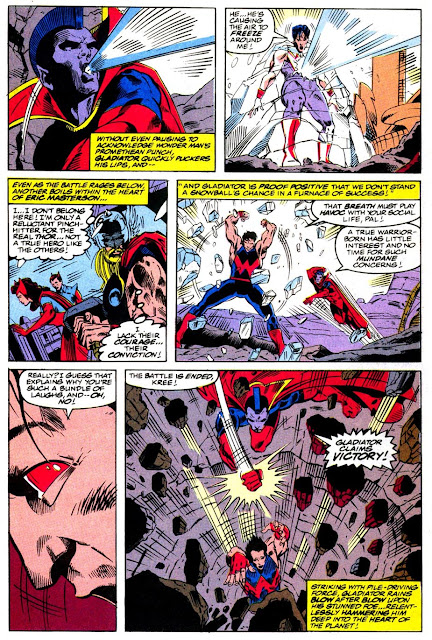 Finally Eric decides he has had enough of watching and using all the power of Thor, blindsides Gladiator with a real hammer. Thor tries to talk peace to the Alien, but instead is met with a boulder thrown at him. (Gladiator formed the boulder by pulling the ground beneath his feet and forming it into one!) 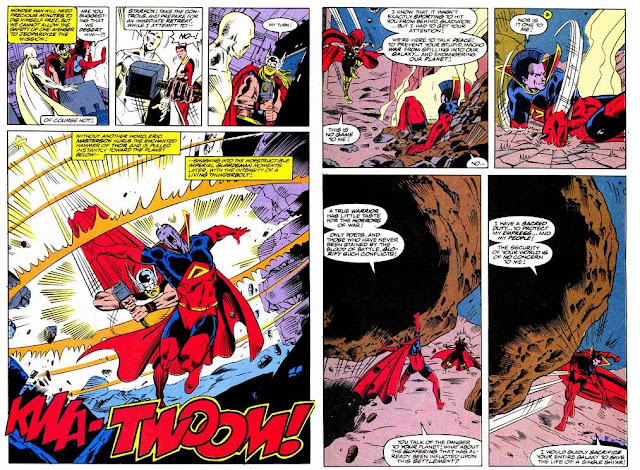 Eric crushes it with his hammer and then shoots a God-blast at the Guardsman. The blast bounces back and throws Masterson off his footing to which Gladiator charges in and lands a punch. 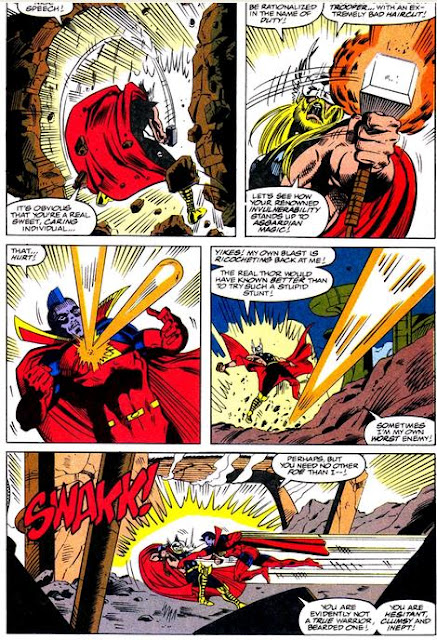 The two warriors go into a test of Strength and the pressure created by them sinks them both into the ground. 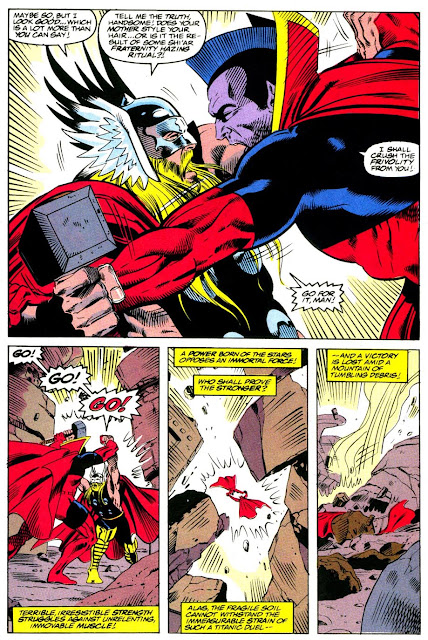 Kallark lays a punch onto Eric knocking for a ride as he himself uses superspeed to run around behind the demi-god and tackle him. Eric twists Kallark and shoves him into the ground. The Guardsman gets Eric into a hold and throws him headirst into the ground and then picking him up, he bitchslaps him. (Tom Defalco ladies and gentlemen, few writers can write a better fight scene.) 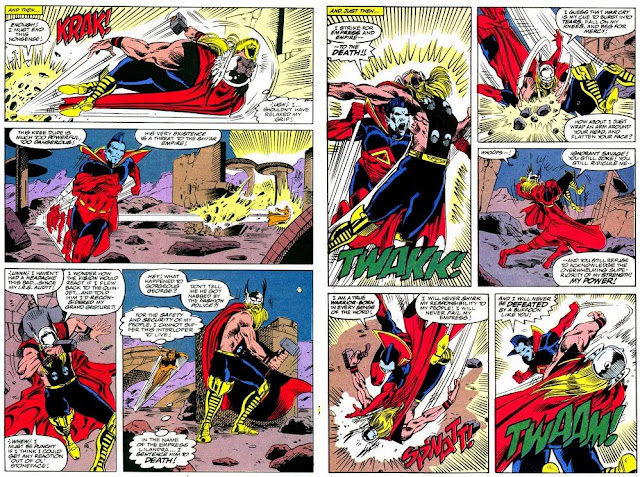 The West Coast Avenger Living Lightning is streaking through the sky and Eric takes this chance to use Mjolnir to call the lightning bodied Avenger into a bolt strike on Gladiator. The strike stuns the Alien and pressing the advantage, Eric relentlessly assaults him into submission having to be stopped by the Avengers just short of killing him. 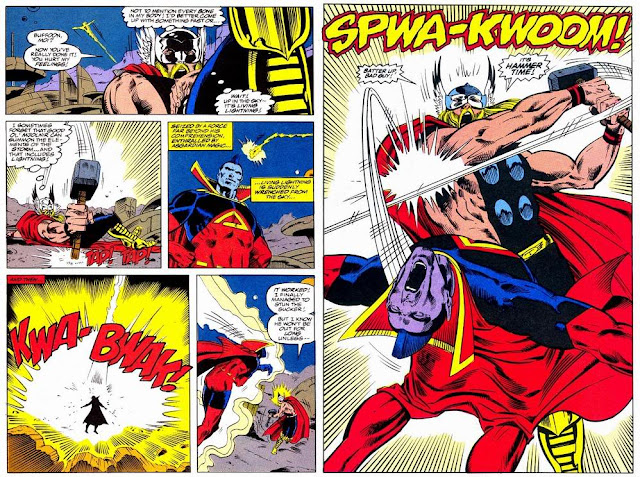 This is a loss for Gladiator but it took three Avengers to do it! 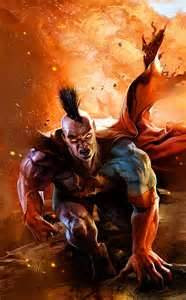 This time it’s Gladiator versus the real Thor! 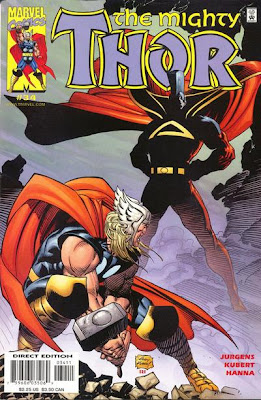 The Mighty Thor (second serues) #34-35
(w) Dan Jurgens (A) Andy Kubert
Gladiator is in disguise as he uses searing heat vision on Jake Olsen (Thor’s alter Ego). Blake barely avoids it and Kallark reveals himself. Donald slams his fist on the ground calling the thunder and transforms into Thor. 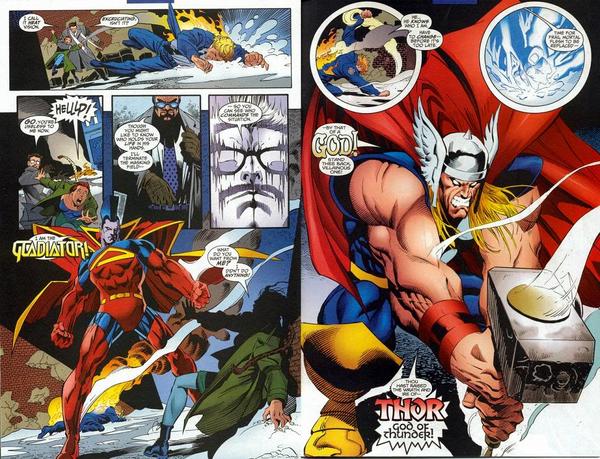 The Odinson lays a downward hammer blow and then follows it up with an uppercut. Kallark recovers and uses super breath which Thor redirects by spinning his hammer. 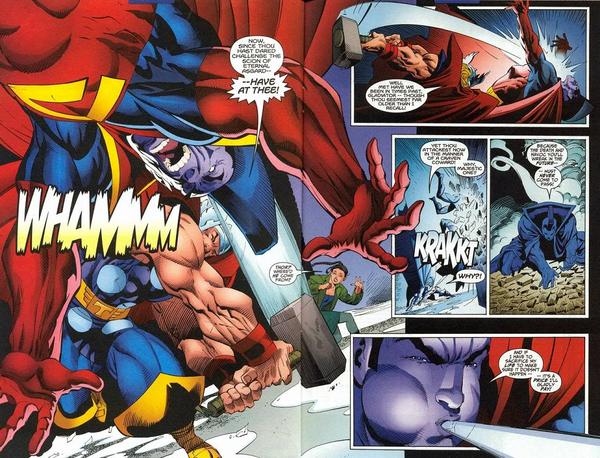 Gladiator clenches his hands together and pounds the street and like in the previous fight, pulls it up and throws it as one huge projectile. Thor swings Mjolnir and obliterates the concrete and metal but doesn’t see Gladiator following it up with super speed and flight and decks the God. 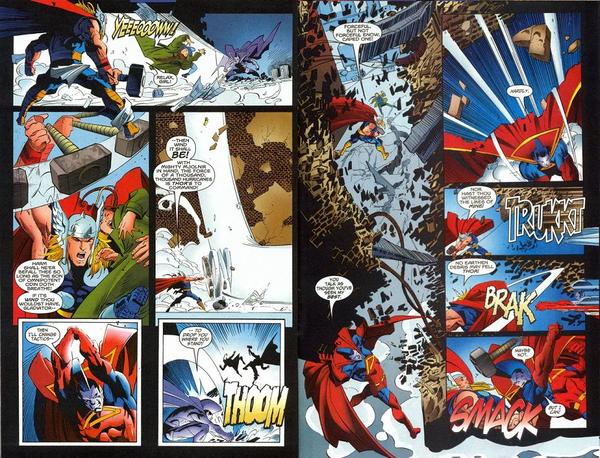 Gladiator kicks the hammer far away and then uppercuts Thor several blocks who crashes into a building and transforms back into Jake Olsen. 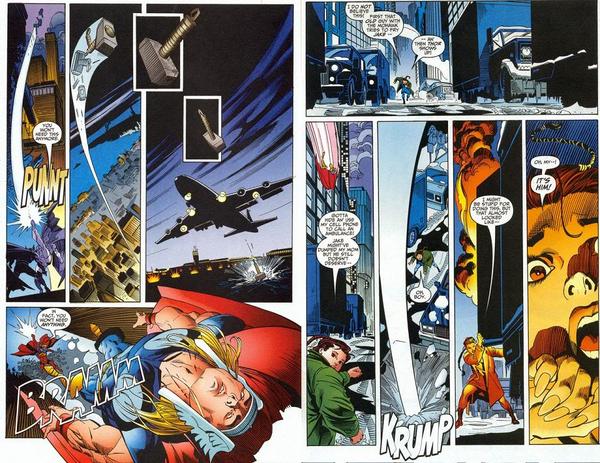 (I think we can call this a win for Gladiator. For the sake of a satisfying ending I will finish writing what happens.) 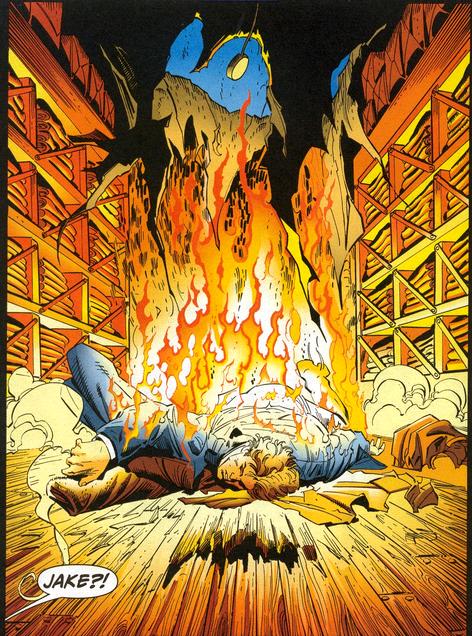 Gladiator charges in ready to finish off the frail Jake but has his cape grabbed by Thor Girl (Taylene) and is yanked backwards. (I just hate writing Thor Girl, sorry to any fans of the character reading this but I can’t stand her.) Gladiator uses heat vision to blast Taylene. The female warrior spins to extinguish the flames and throws her hammer landing a blow on Gladiators head. The Alien recovers and flies up to grab a water tank and throws down onto Taylene and combining it with freeze breath encases her in ice.
With some assistance Olsen is reunited with the hammer and transforms as Gladiator starts to push him into the Earth. Thor fires a lightning blast from Mjolnir and shoots the Alien back to the surface. 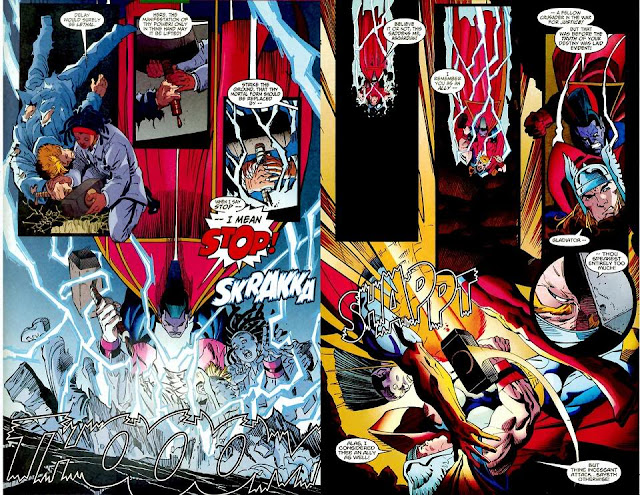 As the battle starts to rage again a plane nearly crashes to avoid the two titans and they join forces to save everyone. Afterwards Thor fires another massive energy blast from Mjiolnir sending Gladiator burning. The Guardsman walks out of the flame like the baddest ass in Badonia and Thor has had enough! 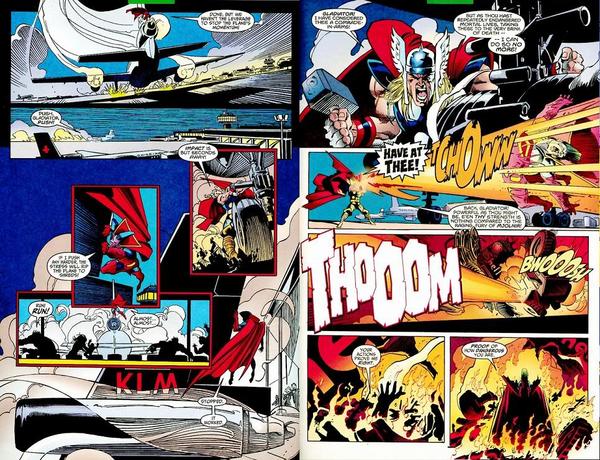 The Odinson begins to relentlessly bash the bajessus out of Gladiator and giving him no time to recover finally knocks him into submission. So Thor gets the final win but just like the first fight he could not do it alone. 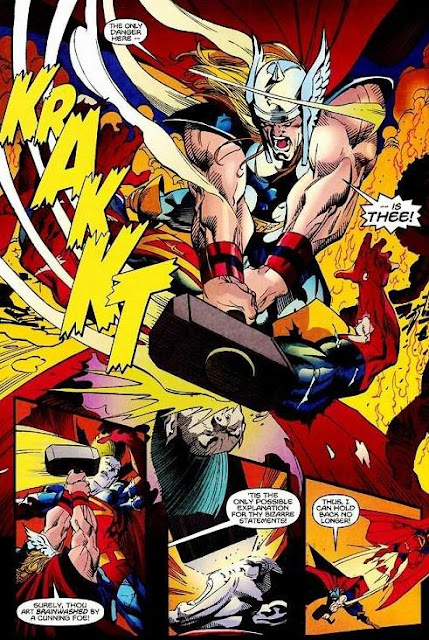 Still a couple of well-done fights between Thor and the Superman analogue Gladiator. Till next time I hope everyone has a great Holiday! 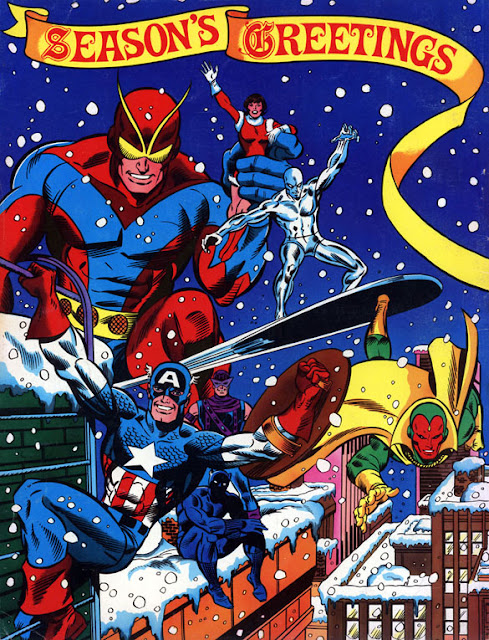