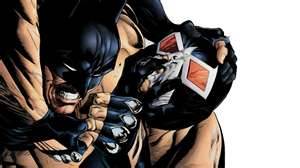 The Dark Knight Rises comes out on Blu-Ray/DVD on December 4th
and has a pretty good fight scene between Bane and Batman. The movie got me
thinking, what are the best Batman fight scenes in comics? Well several
questions came across my mind as to what makes a good fight scene.
1. Is the fight important to the story?
2. Is the opponent formidable?
3.Is it a cool well-choreographed fight?
Number three counts for a lot with me, so much so that a
good fight that means nothing can overtake a fight that means something. A
fight that has both, such as the number one choice on my list, is of course
going to reign supreme. Agree with me, disagree, think I left a good one out? You’re
probably not wrong, but you have to admit that the list has some awesome brawls
on it!
Honorable
mentions:
“One Hit
Wonder” 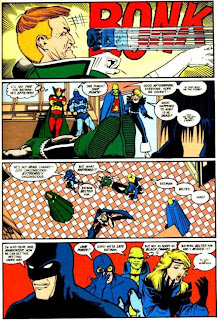 Justice League #1
Guy challenges the goddamn Batman to a fist fight and goes
down like a bitch. Great moment, not great enough to make the list however.
“World War 3” 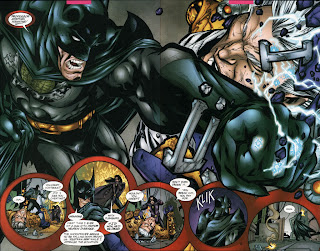 JLA # 36-41
The first time Batman encountered Prometheus, the villain used
his helmet that is connected to his nervous system to copy Batman’s moves and
toppled Batman. In this rematch, Batman was prepared and interfered with
Prometheus’s helmet by giving him a copy of the nervous system of Professor
Stephen Hawking. Another great moment, but most of the fight is off page.
“The Martian
Mash” 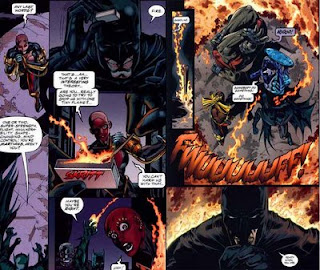 JLA #3
The White Martians in disguise take down the JLA, well
everyone except Batman that is, he is only human after all. Batman uses his
detective skill to figure out who the Martians are and then he knows the
powerful aliens major weakness. Thinking he is just a super strong flick away
from being turned into goo, the Aliens confront the Dark Knight who creates a
fire circle around all of them and then cracking his knuckles, says, “Okay, I’m
ready.”
10. Batman
VS. Dracula
Batman: Red
Rain 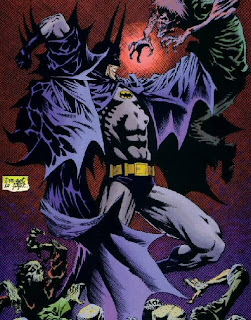 Gotham is
being run by the Lord of Vampires and his minions. Batman does his best to
control the blood sucking menace but in the end he just can’t do it without
some help, and goes and gets himself turned. The final battle is pretty epic as
VampBat uses silver batarang’s as well as his supernatural powers to put down
the count, for the count. At the end Bruce notes that he may be dead, but
Batman will go on fighting forever.
9. Batman
VS. The Incredible Hulk 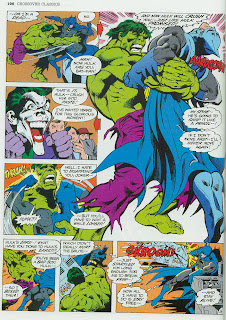 I covered
this battle way back in IHI (5) and even though it’s a wacky pairing, it’s
surprisingly well done. Batman doesn’t just swoop in and kick Hulks ass, he
uses every item in his utility belt as well as his superior fighting prowess to
fell the Hulk for a few seconds. It’s totally believable and it’s an awesome thing
to read.
8. Batman
VS. Nightwing
Batman # 600 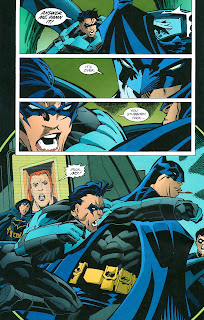 Batman
evades most of the fight and when Dick asks for Batman to fight him, Batman
lays two face busting punches and then goes back to evading until he get his
former sidekick to crash into the case where his old Robin costume is. The
fight ends here with Nightwing a bundle of nerves and proving that Bruce taught
Dick everything he knows, but not everything Bruce knows. Batman played with
him and the only two punches he landed were the only ones he threw.
7. Batman VS. Grendel Prime 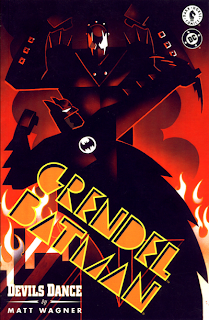 The
only reason this fight is not in the top three is because it is essentially an Elseworlds
tale with a character that not many are familiar with, including me. Grendel
Prime is like a cross between the Terminator, Forge(X-Men) and Jason Voorhees
and oh he has a lightsaber like weapon as well. Batman goes toe to toe with
this monster from the future no less than three separate times and gets his ass
handed to him each time. The last time he manages to take Grendel apart to
study him, and Grendel just repairs himself back from a single hand and then
travels back to the future. The whole story is almost a complete fight scene
and it is a good one.
6. Batman VS. The Reaper
Detective
Comics 575-578 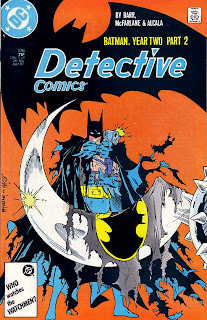 This storyline takes place in year two where Batman encounters
his predecessor as the protector of Gotham. The Reaper was a killer of
criminals who didn’t feel a hero that was not willing to kill would be
successful as Gotham’s guardian. The storyline ends on a rooftop where Batman
uses the gun that murdered his parents in the battle. In the end the Reaper let’s
himself fall to his death secure in the knowledge that Batman will kill if his
back is against the wall. Even though Bruce won the fight and puts guns away
for good after-wards, he knows that the Reaper nearly made him break his own
vow to never kill.
5. Batman VS. Deathstroke The Terminator
Deathstroke
7 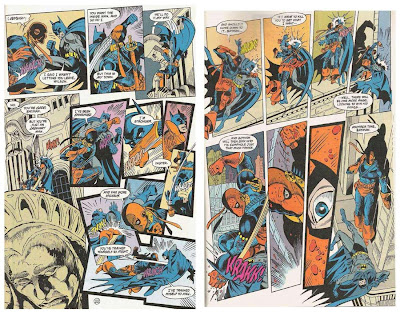 Batman
is looking for answers and Deathstroke has them. Batman takes it easy on Deathstroke
at first but then the kid gloves come off and he’s out to bring the pain.
Deathstroke reveals, he’s also been holding back and states that Batman is just
a man, while he is an enhanced killer. Slade and Batman go fist to foot at each
other but the Terminator is just too much and beats Batman to within an inch of
his life. Batman makes a horror movie comeback but is put down again at the end
of the issue.
4. Batman VS. Bane
Batman
500 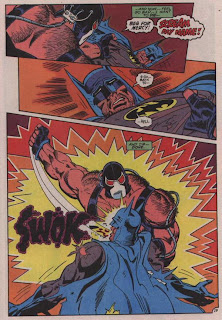 Okay,
now the list is getting tough. At the end of the Knightfall storyline, Bruce
had to recapture a load of villains released by Bane from Arkham. He had not
gotten any sleep or rest since the beginning and coming back to his mansion he
finds Bane waiting for him. Batman gets his ass kicked and then his back
broken, but Batman never gives up and takes the beating the whole way through
until he can no longer stand. Story wise, this fight is probably number one,
but it’s pretty one-sided and so I can’t place it any higher then number four.
3. Batman VS. Clayface/Jason Todd
Batman
618 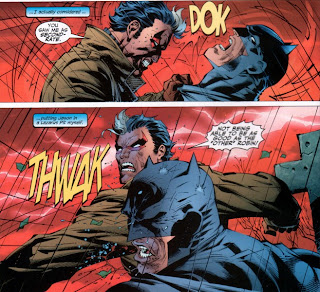 During
the Hush storyline Batman is sent jumping through all manner of hoops and
thinks he has finally found the man behind it, Jason Todd otherwise known as
the second Robin who was murdered by the Joker! Batman doesn’t want to fight his
former ward and is beaten harshly with not only Todd’s physical attacks, but
his verbal ones as well! The guilt Bruce has always felt about Jason’s death
has haunted him for years and he figures maybe he deserves to be beaten. Using
his detective skills and putting all the elements together he realizes that he
is not fighting Jason at all but yet another red herring in the ongoing
storyline as he beats the man’s ass revealing his opponent to be Clayface. (If you read and followed Judd Winick’s
Batman run then he was actually fighting Jason Todd and during the battle Jason
switched with Clayface before the finale… whatever.)
2. Batman VS. The Mutant Gang Leader.
The
Dark Knight Returns: Book Two 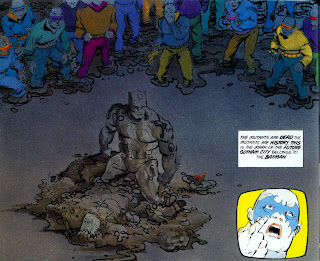 It’s
the future and the villain’s no longer play by the rules. Batman is old and
rusty at the super hero game and while taking down mutants in the BatTank, he
encounters the monster sized mutant gang leader who pulls him out of the tank
and mops the floor with him. The mutant is younger stronger and just better
then Batman. After realizing he can’t fight like a young man anymore, Batman
goes for round two with the Mutant and uses every dirty trick in the book. The
mutant just can’t handle a man as angry as Bruce with nothing to lose and is
killed by him. This is a turning point in the story as Batman shows that if the
bad guys are taking things down to the gutter, he will join them down there, he
will stop at nothing to win!
1. Batman VS. Superman
The
Dark Knight Returns: Book Four 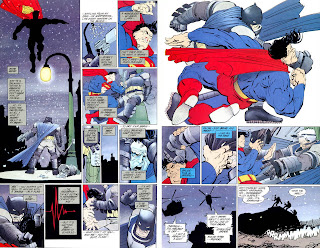 Were you expecting anything else here? This is like the Rock
versus Stone Cold at WM 17 magnitude. This fight is two men representing two
different ideologies. Superman is still the ultimate good guy and Batman has
crossed the line one too many times.  Batman fires missiles uses synthetic kryptonite
a tank and everything else in his arsenal and still Superman keeps coming. In
the end Batman wears Superman down enough to use his power suit and take him to
within an inch of his life. Superman knows by the end, that Batman beat him.
This list was a month in the making as I nearly flipped through every comic with Batman that I have. I found some great fights with others that have taken the Batman mantle, but in the end I decided to keep to just Bruce Wayne. I did go into it with an open mind as to what was the best but the number one fight has been placed on every top fight list for Batman and Superman I have read. I read it again and knew that yes, it was still the best!
Previous installments here http://lostscribe0.blogspot.com/