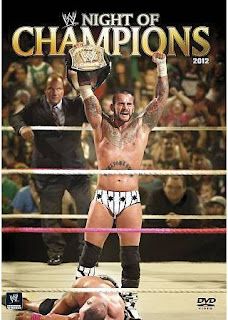 Night of Champions – 2012
Venue: TD Garden
City: Boston, Massachusetts
Attendance: 14,886
Buyrate: The event was up 20,000 from the year before, bringing in 189,000 buys
We get a great video to
open the show about CM Punk and Cena. I have no idea what’s on this card, but
the Punk/Cena deal is a good sign.
JBL comes out to announce.
Wow, he’s lost A LOT of weight. He’s a complete stick.

The Miz [C] vs Rey
Mysterio vs Cody Rhodes vs Sin Cara – Intercontinental Championship
I have a question before
the match begins. Isn’t an ‘Intercontinental Champion’ the same as a World
Champion? I mean, intercontinental means
all the continents, right? And wouldn’t all the continents be the world? Or
does the world count the oceans, and IC doesn’t? I digress.
Really great opener. There
wasn’t a second of down time, and honest to God, for the first time I was
actually impressed by The Miz. The
match includes a lot of great spots, including everyone going for the pin on Miz
after a 619 and Frogsplash, with each pin feeling like it was going to
be the one. It was also funny to see Sin Cara all of a sudden decide he needed
to try and put an extra mask on folks.
Miz hits the Skull Crushing
Finale on Cody Rhodes for the pin at 12:05  | ***1/2

We get an absolutely DREADFUL scene with Kaitlyn
being hurt, giving the Claire Lynch performance of a lifetime.

Recap of Team Hell No. Am I the only one who
thinks their finisher needs to be Kane setting up for the Tombstone, as Bryan
then hugs him, and they both drop
down? S’perfect.

The match is moving along nicely, and then it abruptly
stops so they can do the stupid “hug-it-out” spot. After that, the match
never really picks back up, and they end up winning in a way conducive to their
gimmick, but still lame.

Daniel Bryan kicks Kane off the turnbuckles onto
an unconscious Kofi for the pin at 8:22  | **

Teddy Long and Booker T are talking in a room
that’s reminiscent of the sweet WCW interview locker rooms where Lex Luger
is talking amongst lockers that display casually hung WCW and Total Package T-shirts
and foam fingers. Eve gets the title shot now that Speed Racer [oh ho ho] is
out.

Zack Ryder won a battle royal on the pre-show to
earn this shot, tossing out Tensai last. The match is about as you’d
expect, with Zack Ryder getting the ever-lovin’ hell kicked out of him. Cesaro
is somewhat impressive, although
nothing I’d go crazy for. At one point
he does a pretty sweet move where he tosses Zack upward, and greets him with an
uppercut on his way down.
Zack himself gets a great moment where Cesaro goes for the suplex, but Zack
throws his weight, lands on his feet while still in a suplex hold, and
turns that into a neckbreaker. An average bout, very fitting for the US title.
Antonio hits Zack with the Neutralizer for the pin
at 6:32 |  **

Ricardo, Del Rio, and Otunga do some wacky stuff
with neck braces. 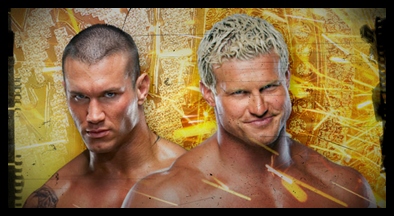 JBL says this match would be good in a phone booth.
The only two people I believe could pull that off is Roddy Piper & Keith
David.

Honestly, I don’t watch much current wrestling
unless there’s a big time match that people are buzzing about. However, because
of these requests, I’ve been seeing a lot of Ziggler, and I’m sure you
all already know this, but he’s the man. He’s fresh, original, and one
hell
of a wrestler. Hell, he’s supposed to be the heel here, but the crowd is
cheering him like crazy. He and Vickie make one hell of a combo too.
Nice spot where Orton gets Ziggler outside, and starts to lose it. He slams
Zigger into the barrier, then lays him on top of it and does the second-rope DDT, effectively killing
him. So it makes Ziggler look like the man when Orton throws him in the ring,
and he’s able to throw his leg on the
ropes. Great match. Not as good as Ziggler’s bout with Sheamus, but still
great. Man, does Ziggler EVER win? 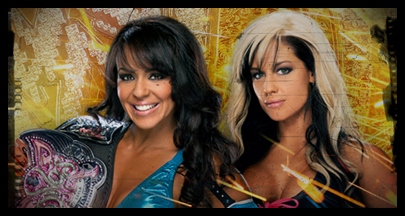 I truly cannot understand why they have women’s
wrestling. EVER. No one has EVER paid a ticket or spent a dime to watch women
wrestle. Perhaps in Japan, but in America? Not once. Not gonna lie though, Eve
having Layla in a head-scissors is
pretty hot. This was honestly a
pretty decent match, Eve is an actual talent, I think, although I could have
just caught her on a great night.
Eve hits Layla with a neckbreaker to snag the win
at 6:29  | **1/2

We get a commercial for Rock vs Cena. Has anyone
seen this? Is it as absolutely boring as I imagine it to be?

Kane & Daniel Bryan argue over who happen to be the Tag Team Champions. The major highlight being AJ drenched in ice cold Gatorade. That’s a
bit of alright. NAY…quite a bit of alright.

We get a recap of the Sheamus vs Alberto, in which
the entire feud is all about David Otunga taking a deposition from Sheamus.
This is all about banning the Brogue Kick. It’d be so much easier to get to
that point without all this crap. I’m

not looking forward to this, damn
you Jobber123.

Is it just me, or does Sheamus’ song really sound
like “it’s a shameful thing, Lobster Head”? Booker comes out and
announces the Brogue Kick legal. So, everyone got to see all that exciting court
room stuff simply for the entertainment value of it. It’s also
nice that
an interesting stip has been dropped. Also nice is when WWE chooses its
history. Sometimes they talk about how the WHC dates back to Lou Thesz
and Ed Lewis, other times it’s only 10 years old. Either way, two World Titles
is stupid.
Del Rio spends the first round of his momentum
working the arm in various ways, until Sheamus turns the tides by catching Del
Rio with a clothesline as he leaps off the turnbuckle. A Brogue Kick attempt is
thwarted, with Del Rio turning it into a chance for an
enzuiguri. I hate it when wrestlers telegraph their finishers like
Sheamus, Orton, and Shawn, because the person they’re targeting would have to
be Bernie Lomax to not see it coming. The ending was cooking along
pretty nicely there. I’m more than happy to admit that this was a great match,
much better than I expected.
Alberto eats the Brogue Kick and the pin at 13:56
| ***1/2 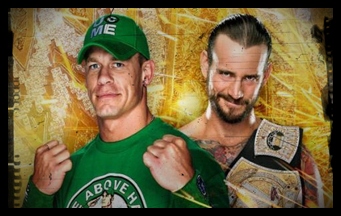 CM Punk [C] vs John Cena – WWE Championship
Cole says that at MiTB, Punk defeated Cena to
completely change WWE. I think that’s a bit of an understatement. I mean, back
then we had a stupid looking title belt, Triple H forcing himself in
main events, Cena being all over TV and the top of the company, 50/50 booking
crap, and talent being completely wasted! Now-a-days, well, the WWE
comes with a brand new hat!
It should come as no surprise what a great match
this is. The last two matches between these two, Punk and Cena were evenly
matched; however, this time the last year of experience has put Punk on
a different level. He dominates Cena for the first half of the match, and stops
Cena’s
comebacks at every turn,
countering the 5 Knuckle Shuffle twice, with one being a sweet counter into the
Vice, as he looks right into Cena’s face and screams “BEST IN THE WORLD!”. It’s also fantastic to see
Heyman on the outside, at times beaming like a proud father and at others
worrying like a wife. This match truly displays Punk as best in the world. Cena
can’t put him down, and Punk has an answer for him at every turn. An awesome
spot sees Punk hit a Rock Bottom, as he’s tried just about everything to wipe
Cena out. Both men are dead, absolutely dead, and I’m a bit upset that I
know who wins, because this would have been incredible to see live. Without a
doubt their best match to date. I’d love to go full monty, but I can’t with
that ending.
Both CM Punk & John Cena’s shoulders are down
for the count of 3 at 26:50 | ****3/4

We end with an awesome scene as Heyman and Punk
walk to the back, while Punk’s yells “I’m the best in the World! Best in
the World!” and Heyman pets his ego with “and that’s why I
respect you! That’s why I respect you!”

Showcase Showdown: Compared to the last two shows I reviewed, this one was disappointing me at first. The matches weren’t terrible by any means, but they weren’t blowing me away like last time. However, once we got towards the Main Event scene, things really picked up and this show became another thumbs up. After disappointing main events with Del Rio & Sheamus, they really had to prove themselves this time around and did so. CM Punk & Cena are this generation’s Rock & Austin. Untouchable chemistry both in the ring and on the mic. A match that people need to seek out if they don’t feel like watching the entire show.

Before I get into my shameless self-promotion, and I do mean shameless, I’d like to thank Steve Ferrari for proof reading this bad-boy.

Any requests or mailbag questions send to [email protected], or let me know in the comments section.

Str8 Gangster, No Chaser – The website was originally slated to play Han Solo, but passed so it could be the lead in the My Mother The Car Reboot. It still stands by it’s decision.  It’s got Top 4’s, Man Movie Encyclopedia entries, Saved By The Bell Archive articles, movie reviews, as well as wrestling and horror.
WCW In 2000 – The only website out there dedicated to reviewing The Plan 9 From Outer Space [“Now let’s hear him call Boris Karloff a cocksucker”] of wrestling.
The Man Movie Encyclopedia – Vol.1  – My book on amazon. Current 5 star rating, with endorsements from Scott Keith & Maddox, not to mention other fellow BoD’ers. A perfect gift for Christmas, and every night of Hanukkah.