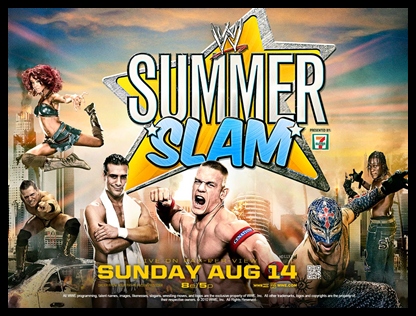 This request review is now brought to you with 98% less typos! Well, let’s not get crazy. 96% less. 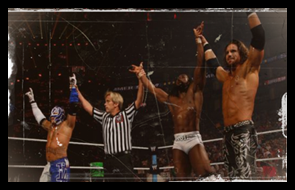 Rey Mysterio, John Morrison & Kofi Kingston vs The Miz, R-Truth, & Alberto Del Rio
It’s a real shame that Kofi seems so complacent with his place in WWE, because he’s a real talent, and deserves to be much higher on the card. His role in this bout is no exception. The match itself I didn’t have too much faith in, however it started off great and never let up. An absolutely perfect opener, that was fast paced & action packed, with everyone hitting on point.
Mysterio hits R-Truth with the Frogsplash for the pin at 9:37 |  ***1/2 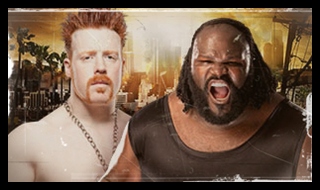 Mark Henry vs Sheamus
I never saw much of Henry’s rise before he won the strap, but the pre-match video package, coupled with the bout, shows they sure did one hell of great job of making him look dominating. Quickly snagging the upper-hand, Mark never really loses it, as he preforms one of my favorite moves from a big guy, thee ol’ “step on the guy’s chest and walk over him”. Later they do a great spot that all dominating monsters should do, or some variation, as Mark Henry picks up Sheamus and sends him crashing through the barrier. Normally I hate count-outs on PPVs, but this worked perfectly. Another great match.
Mark Henry wins by count-out at 9:28 | ***1/2

Cee-Lo preforms, and thankfully I get to skip it. Man, WHY do they put this crap on PPV? Do they
really think people want to see this? Do they imagine there’s someone out there high-fiving a friend because Cee-Lo is out in his Moo-Moo from the Liberace House of Crap?. 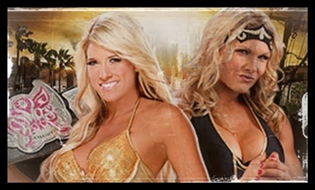 Kelly Kelly [C] vs Beth Phoenix – Divas Championship
This is during the time when Beth is wearing that ugly blue outfit. It’s a Divas match with Kelly Kelly. Cut & paste, really.
Kelly Kelly pins Beth with the roll-up, obviously at 6:33 | * 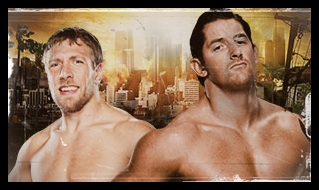 Wade Barrett vs Daniel Bryan
Bryan hits a Dragon Screw
Leg Whip, and some where in Texas, Dusty Rhodes is trying it out on his
wife. It’s flashy and all, but I really wish Bryan would stop doing that
back flip. There’s going to come a time when it doesn’t end well.  Soon
he’s building up momentum, but Wade simply halts that whole mess with a
massive black-hole slam esq
move. That’s how you make a man look dominating. Later, Wade has Bryan
sitting on the middle rope, with his chin resting on the top one. He
then grabs his head and smashes it with knees until he hits the ropes
and brings a boot to Bryan’s face, knocking him down to the floor head
first. A brutal spot that Wade really needs to make a regular. Daniel
later comes back with a vicious response as he flies off the apron to
the outside, crashing his knee into Wade’s face. This match has been
extremely hard-hitting, and continuing the streak of great matches. I
was originally pissed that Wade won, but Bryan’s doing OK, so my
senseless bitterness is forgotten. I’m sure Wade will be pleased to read
that.
Wade hits Bryan with the Wasteland to score the pin at 11:47 |  ***1/2 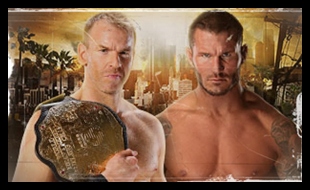 Christian [C] vs Randy Orton – No Holds Barred for the World Heavyweight Title
This feud reminded me a lot of Edge vs The Undertaker, where the chemistry was off the charts as they headlined PPV after PPV. Christian & Orton just couldn’t have a bad match in 2011, and it reached it’s zenith at SummerSlam. An absolute monster, as both guys go until absolute tilt, it’s incredible. I had the match originally docked a quarter because of Orton winning, but that really shouldn’t effect the quality of the match, so I went all the way with this. What a brutal ending.
Orton hits a mid-air RKO onto the steel stairs at 27:43 | ***** 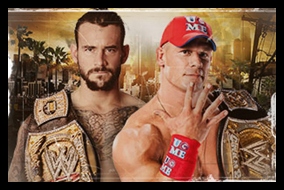 CM Punk [C] vs John Cena [C] – WWE Championship w/ special guest ref HHH
The chemistry between these two is one of the all time greatest. They absolutely can’t have a bad match between one another. Fantastic sequence mid match as both Punk & Cena try to hit one another with their combo moves, but keep getting shut down by the other person just as the momentum gets going. It then switches into a back and forth between submissions, where you feel the match could end at any moment.
Later they trade attempts at the GTS and AA, with Cena winning the exchange. The air is thick with finality, only for Punk to kick out, soon besting Cena with a GTS of his own, as Cena answers back with a kick out of his own. The crowd has hardly, if ever, sat down for the entire bout. One hell of an incredible match that I personally feel trumps their MiTB bout, due to a shorter match time and better pacing.
CM Punk hits John Cena with the GTS, scoring the pin at 24:28 | ****3/4

Of course, as we all know the Summer of Punk soon became of the Fall of Triple H & Bestie Kevin Nash. Who apparently sits back stage and texts himself.

Showcase Showdown: Honestly, I never had much faith that 2002’s SummerSlam would ever be dethroned, but it clearly just happened. The entire under card never went below ***1/2 [who counts Diva matches? I don’t], as the two main-events went on to deliver dual classics. One of the greatest PPVs I’ve ever seen, easily earning the highest of recommendations. Incredible.

Hope you guys dug it. If you have any requests or mailbag questions, just ask in the comments, or send me an email.
[email protected]

Str8 Gangster, No Chaser – The very website that caused the MPAA to come up with a rating between PG & R. So safe to say, my website is rated BONER. Wrestling reviews, horror, Top 5’s, Man Movie Encyclopedia entries,  as well as articles from the Saved By The Bell Archives.
WCW In 2000 – We’re 4 months in, and we’ve just learned you never trust a man from Hollywood. Speaking of which, you can also read a review of Ready To Rumble. A movie I PAID to see in theaters.
The Man Movie Encyclopedia – Vol. 1 – My book. Constant 5 star ratings, with endorsements from Scott Keith & Maddox.