Skip to content
I Have Issues (9)
By. Lostscribe (J. Ryan Buck) 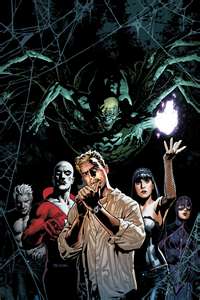 I went to the comic shop this past week for the first time in two months. With the exception of Swamp Thing I was kinda of lost in the landscape. Sure I have been scopinng out comics on the internet, but until you actually pick up an issue and flip through it you can’t know whether its for you or not. The writing is always the main reason to buy but if the art is bad it will push it to trade wait instead of buy now. I skipped Animal Man months ago because of money issues and now I’m pretty far behind. I did really enjoy Jeff Lemire on that book but still just can’t blow a wad of money at one time on comics right now. Jeff Lemire is now on Justice League Dark and I’m only three comics behind on that one. Let’s get on with it.

Justice League Dark #9
(W) Jeff Lemire (A) Mikel Janin (C) Ryan Sook
We open with John Constatine being led through the Peruvian jungle bound and gagged. The purple robed gun toting men take him to Felix Faust. Felix has set himself up an army of natives just like Col. Kurtz in Apocolypse Now. John is of course being his usual bastard-we-love self to Faust and showing him no respect. 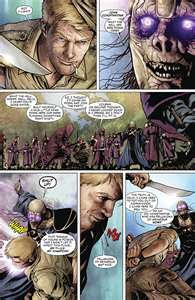 Just as Faust is about to take care of this “limey street urchin” (his words not mine) Black Orchid shape changes from one of the robed warriors and decks another one. (Black Orchid is a purple clad shape changing chick with super strength and a few other powers. Can you tell I know very little about her? She looks badass though!) Next we see Zatanna who says “ECOMEB ELBISIV!” and they do, revealing the rest of the team. But before we move on I have to comment on how good Zatanna looks here. I’m not usually one to drool over drawings but this would be one that I could. If I were to grade her on a hotness scale then we are talking serious redwood territory here! (The art is amazing! It has a realistic look to it but with great colors that still make the art look exciting and pop off the page like a comic should.) 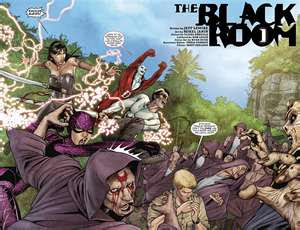 Rounding out the team is Andrew Bennett (Vampire) and Boston Brand the Deadman who possesses another robed man and starts taking others down. John is reminiscing about how they ended up their. 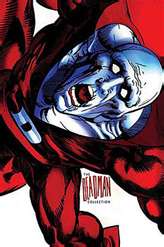 Before
Constantine is nursing a hangover when he gets a visit from Steve Trevor. If that name is familiar to you then you are a fan of Wonder Woman. John even calls Steve the Amazons boy-toy (as if that’s an insult.) Steve asks John if he has ever heard of the Black Room (think of that warehouse at the end of Raiders of the lost ark) and John replies that he has but that it’s not real. Steve assures him that it is and shows him Doctor Destiny’s dream stone. Steve makes a deal with John that if he investigates Felix Faust operation in Peru and finds out what power he’s using to enslave the people to do his bidding that he will give him ten minutes in the Black Room to do one of those Toys R Us shopping sprees like back in the day. You see Steve Trevor works for a government organization known as A.R.G.U.S. And they already sent a Dr. Mist who reported back that Faust is using something really scary and now they can’t even contact Mist. John wonders what is to stop him from taking the mysterious artifact for his own and that’s when Steve shows him the government operative going with him, Black Orchid. Steve mentions that Johns group is called Justice League Dark by the government to which John replies that its the lamest name he has ever heard. 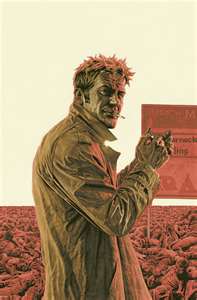 Now
The team is charging up the Aztec/Mayan temple and squabbling the whole way. This is the Anti Justice League. No one wants to be there but they are for various, mostly selfish reasons. Reminds me of Marvel’s Defenders back in the day. Saving the world is more a side effect of the mission as opposed to the reason for being there. The League enters the Temple and Faust unleashes his “pets” some type of spider-people. 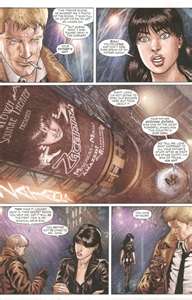 Before
Constantine is talking to the rest of the League about joining him in Peru. Everyone is outright rejecting his proposition. Andrew Bennett owes him one, so John cashes that favor in right now, so that’s one on his team. Pissed about everyone ditching him, John marches out in anger, but is followed closely by Zatanna. John mentions to female magician that if she joins him then the others will too. She asks what’s in it for her? John responds that he saw a picture of “The Black Room” and he saw her fathers hat. 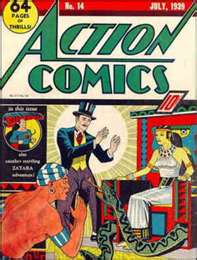 Zatara, Zatannas father is an interesting character that most comic fans don’t know about. His first appearance in a comic was Action Comics #1, also the first appearance of some character named Superman. Zatara’s best friend Roger Elliot introduced him to Thomas Wayne. Zatara then introduced Thomas to Martha and together they had a son named Bruce Wayne. Thomas and Martha are killed and Zatara becomes an alchoholic over his guilt of not helping his friends. A young Bruce Wayne visits Zatara and asks to be taught the ways of illusions and escape. Zatara agrees and so Bruce is taught the first of the hundreds of things he learned to be Batman. Like Zatanna he was a magician who can speak things backwards to cast his spells. He was killed in Swamp Thing #50 during a séance against a demon who’s mere glance would burn you alive. The demon looked at his daughter Zatanna and Zatara took the hit himself to spare her life. 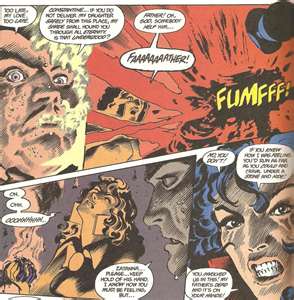 The old exploding head trick.
Zatanna accuses John of lying (which of course he is, because his mouth is moving) and he convinces her that he’s telling the truth.
Now.
Zatanna is obliterating Spider-people and Bennett transforms into a wolf and tears some bad guys up. Deadman attempts to possess Faust but is rejected and put down by the old wizard. Next Faust get’s John into his grip and boasts that in this place no magic can harm him. Next Johns skin shreds and the form of Black Orchid appears. Orchid let’s Faust know that her powers aren’t magical. The purple shapeshifter knocks Faust the f--- out! With Faust on the ground they free Dr. Mist and investigate what it is that Faust has that gave him so much power. What they find is a cube that is a map to The Books of Magic. 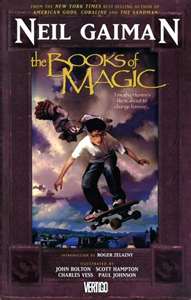 Not sure where the team is going to find there copy but I got mine here http://www.amazon.com/The-Books-Magic-Neil-Gaiman/dp/1563890828/ref=sr_1_1?ie=UTF8&qid=1343520197&sr=8-1&keywords=books+of+magic+neil+gaiman .
All in all it was a pretty fun book, ‘im definitely sticking with it. While I have always loved the vetigo line of books and the cool characters that populate it, the books are at times so dark and depressing that I needed a superhero chaser to make myself feel more upbeat. Here we have the cool characters of the vertigo line but done in a more fun way. Plus I still have old Swamp Thing for the make you think dark storytelling when I want that! Jeff Lemire is a great writer and while this isn’t the character driven work of his books Animal Man and Sweet Tooth, it’s not trying to be. It’s supposed to be a fun romp in the occult section of the DC universe and with that in mind it does it’s job well. I really hope they expand into more area’s! Would love to see Dr. Fate and Swamp thing show up as we’ll as some of the Sandman universe characters. I know Gaiman has to sign off on that but Death appeared in Action comics a couple of years ago so anythings possible! 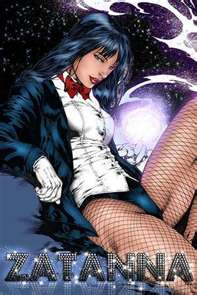 Nothing at all to do with why I love this comic.
And as always if you missed any of my previous installments you can find them here. http://lostscribe0.blogspot.com/