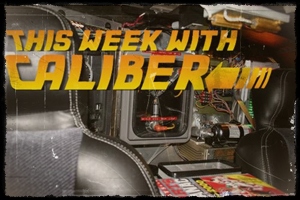 This week, I thought I’d look back at the joy of wrestling merchandise. There are few things out there that can trump pro-wrestling in terms of coming up with crap to sell to the masses. As a kid, I was more than happy to buy everything they had to offer. So, let’s hop into the proverbial DeLorean and get it going to 88.8 gigowatz and revisit my childhood for This Week With Caliber…

When you’re a kid, there’s something
you live and breathe by. Something that rises the sun in the morning,
and sets it at night. That just so happens to be the merchandise of
whatever you so happen to be into it. My first big obsession was with
Teenage Mutant Ninja Turtles. Those bastards were absolutely
brilliant in their marketing, because they created a figure for
EVERYTHING they ever showed. After that, it was GI Joe. Then finally,
the last part of child-hood was dedicated to wrestling.
I became a fan in 1995, which was a
rough time. Wrestling was in the dumps, big time, and I couldn’t find
a damn thing! No t-shirts, no backpacks, no bed-sheets, and no
action-figures, which as a young dude, you know there’s nothing more
important than action figures. I had a friend who’d been a wrestling
fan his entire life, and had a huge surplus of figures. He gave me
his duplicates, which upped my collection to three. I now had Bret Hart, with fist smashing action! Razor
Ramon with twist-his-torso-clothesling-action! And finally, The
Undertaker, with the same thing Razor did. WCW had figures,
but they were just molded plastic that you couldn’t move, and they
were huge. But there was a ring, which I was so excited to get. Of
course, my WWE figures’ heads came up to the 2nd rope. 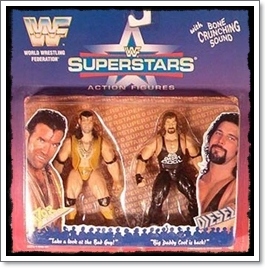 Then the day came. On my 136th
trip to Toys R Us, there they were. Razor Ramon, Big Daddy Cool, Bret
Hart, and The Undertaker, in 6 inch, full-moveable glory! With, WITH,
bone breaking action! I was so excited. I only had like, 6 dollars,
but my mom saw how excited I was and knew this was a big deal, so she
bought me all 4. If even my mom never did another thing for me again
after that, she’d forever be the greatest mom ever. Kids these days,
they’ll never know my sorrow. They have everything, and all the
action-figures are kick-ass. With belts! 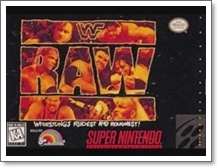 The only medium that could match
action-figures, was video games. They had WrestleMania for the NES,
and it was God-awful. Pro-Wrestling for the NES was cool, but I
wanted to wrestle as the guys I saw on TV, dammit! King Korn Karn was
never at WrestleMania! So, I finally got a SNES. My friend had a
Sega, and owned Super WrestleMania. Usually the SNES versions are
better, but not this time. There were no finishers! Hogan did no
leg-drop, The Warrior did not fly through the air, shoulder-first. It
sucked. But then, then came Royal Rumble. Not only did you have
finishers, but you could play the Royal Rumble feature! Tag-matches!
Title tournaments! And when you won, they handed you the strap! I
lost my freaking mind. Now, I thought I knew joy, but I truly did
not, until I got Raw is War. Completely updated roster, tons of
different wrestling modes, and super-finishing moves! You could
literally roll a guy up into a ball, and punt him out of the
ring,what more could you want? When you would grapple with a guy,
you’d have to mash your buttons in order to win the lock-up, and
because of this, I use to get severe blisters on my thumbs. It was a
nightmare. The last wrestling game I played on the SNES, was
WrestleMania The Arcade Game. I liked to lie at myself as a child,
and say it was fun, but I knew it sucked. I liked how real the guys
looked, but I didn’t want Undertaker to launch Ryu-fireballs that
looked like ghosts. I just wanted him to Tombstone people, dammit!
Now, as a kid, you want to rep your
gang. You want to pledge your allegiance. I was unable to, because
you couldn’t find wrestling shirts in stores. I was lucky enough to
score a fake-gold razor that said Razor Ramon on it though, from a
friend of mine who no longer liked wrestling. I had another friend
who’d wear those HBK sun-glasses, and man, we thought we were
chick-magnets with these things. Sometimes, it’s awesome to be that
deluded. It’s funny, back then, when you saw a person wearing a
wrestling shirt, it was like seeing a long lost realitive or
something. You knew that person was part of your tribe. You knew they
suffered the same taunts and b------- from people who didn’t like
wrestling. The same people who in 6 months, would tell you how cool
your Austin 3:16 shirt was.
When the boom happened, it was
awesome. I had all the figures I could want, and just about every
store you went too had Stone Cold shirts. Hell, you could get one
Lover’s Package. So, when I went to a house show in 1998, I came to
school the next day with my Austin 3:16 shirt and hat. My real name
is Austen, but of course everyone thinks it’s spelled Austin. Well,
most folk thought it was bad-ass, but there was a group of Bible
thumping chicks who thought I’d had the shirt made, and was being
out-right blasphemous. I never set them straight, because it was an
easy way to dig at them. So, thanks Steve. 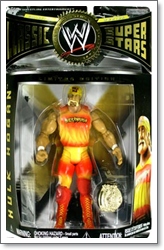 Once I hit my 20’s, there was a good
3-4 year slump where I wasn’t into wrestling, so I never bought much
then, obviously. Now that I’m back into wrestling, the WWE has really
done a lot to keep getting money out of the older fans. They have a
great line of classic figures, that are extremely detailed, and worth
while to add to your collection. I’m big on the McFarlane/NECA lines
of action-figures, which are based on action/horror/sci-fi films, and
are crafted with incredible detail. That said, the WWE line do a
great job of keeping such aesthetic value. I’ve got myself a Hulk
Hogan, as well as a John Cena. They hang out in my bathroom next to
my Slash figure, and often times my younger brother puts the two in
sexual positions, so I’ll walk in to find Hulk Hogan knowing John
Cena as so few have.
I went out to the storage bin as I was
writing this article, to see if all of the figures that my brother
and I collected over the years were still around, and sure enough.
There’s two massive bins full of’em. I’d say at least 150 or so, and
everyone from HOG & PIG to Vince McMahon and Owen Hart are there.
If I have a son, he’ll never have to know the pain of having to
pretend your GI Joe’s are wrestlers, and to be honest, I kind of hate
him for it.

Anyone have any suggestions for future articles, leave it in the comments, or the almost antiquated notion of email: [email protected]
For more Caliber, follow the links;
Str8 Gangster, No Chaser – recently added a rant about men not being men anymore, and there’s some other pretty neat things there to. Man Movie Encyclopedia entries, horror talk, and Top 4 lists.
WCW In The Year 2000 – the horror….the horror…
The Man Movie Encyclopedia Vol. 1 – So far, 3 reviews, all 5 stars. Endorsed by Scott Keith, with a review from another well known writer on it’s way.

Alright, time to knock out Biff, grab the Sports Almanac, and head back to the non-Biff Co 1985.