Live from Richmond, VA.  Finally, back in a city big enough to warrant inclusion in the opening!

I’m out early today so no news I’m afraid, although there seems to be more Dark Side of the Ring fallout with Tommy Dreamer’s recent apology. How soon before guys start avoiding going on that show I wonder?

Even the dead are rising and going to Dynamite now. In all seriousness, great to see someone able to honor his legacy again. I will buy an Owen shirt as soon as it’s available.

https://twitter.com/themattcardona/status/1439818124711366656?s=21
Oh man, Cardona accidentally blows the lid off his own conspiracy by confirming it on Twitter!  Huge if true.
“Wrestlers” and “wrestling” are reportedly on the list of words World Wrestling Entertainment wrestlers are banned from using. Do you think the National Football League, Major League Baseball & the National Basketball Association should adopt a similar strategy?

I dunno, I don’t find NFL or NBA to be particularly entertaining.

People seem convinced that Hardy is getting a haircut but surely OC losing (or being cost the match) is the smarter play. They can do the deal where OC nonchalantly sits down, makes himself comfy, whips out a magazine, gets shaved and then gives a thumbs up
while Hardy goes mental because OC is no-selling the haircut. OC would probably look pretty cool with a buzz cut and if he doesn't, then it wouldn't take too long to grow his hair out again anyway.
I can see just that, actually.  Good call.

Probably should have thought of that BEFORE he did the show, but it’s a start, I guess.

I have hundreds of old wrestling magazines that I’ll never part with. I was wondering if you’d be interested in me writing summaries of them, like your Observer reports. Here’s a sample:
Absolutely!  I actually had a similar idea recently but couldn’t track down any issues of PWI Weekly without paying ridiculous prices on eBay.  So without further ado, here’s Justin with Inside Wrestling from May 1988…

Looking Back: Inside Wrestling Magazine, May,1988 $1.75 U.S. /$2.50 Canada (Press deadline was after the Royal Rumble, before the February Hogan/Andre match on The Main Event)

Tonight’s NFL game is Chiefs/Ravens.  Your MLB game is Phillies/Mets.

Later this week on the Blog of Doom, we have a Joshi Spotlight on GAEA; Wednesdays of Honor looks at WrestleRave Act 2; and your wacky dream match is… an actual dream match, as the Rock and Roll Express take on the Road Warriors!

Enjoy the night.  See you tomorrow for Elevation.

Hey Scott,
Do you think there's any chance they do an episode about Vince raping Rita Chatterton?
Feels like that one would veer too far into “He said she said” territory.  But I can definitely see one about the whole Murray Hodgson scandal from around the same time.
Vice has been going pretty ham at WWE and their culture being prone to and full of debauchery. I’m sure the WWE are thrilled.
This leads me to wonder, given their consistent use of WWE footage, can you give any thoughts why they haven’t persuaded legal action over it, simply to make the producer's lives more complicated and possibly get them to stop over the legal cost of producing the show? If the sale rumors are true, this series can’t be helping by highlighting so many issues.
I don't know.  It's been argued that the footage is fair use because it's basically screenshots of WWE footage, but fair use is a legal defense after the fact and not a shield you can hide behind beforehand, so I'm surprised as well that we haven't heard of WWE trying to drop the hammer on them.  Hell, you'd think they'd take issue with Vice using so much of their intellectual property and names and such as well.  Maybe they made a deal beforehand?  My own speculation was that Vince was essentially selling them the licensing beforehand but I don't know if anyone has actually come out and said how they're getting away with it.
Hiya Scotty
Some quick questions:
1) In their respective primes, who would be tougher? Suzuki or Meng?
2) Who's turning heel first? Punk or Danielson?
3) What's the stupidest NXT name-generator outcome ever?
1.  Suzuki is still in his prime!
2.  Punk.
3.  “Hey, here's the son of Curt Hennig and grandson of Larry Hennig.  His name is Michael McGuillicutty.”  Bonus points for “Here's the son of Mike Rotundo and grandson of Blackjack Mulligan and his real name is Windham Rotunda.  We'll call him Husky Harris” but I forget if that was an NXT/FCW creation or not.
Hey Scott,
Simple question :
Which ongoing tag team was more than competent as a unit, but had members who were both average at best in singles competition?
I'd go with the Fantastics, as neither Rogers nor Fulton was anything special as a single but they managed to elevate each other.

The Eliminators start the show by finishing the job of shaving Saturn’s head, which the Pitbulls started last time.

Well that game yesterday was sure worth risking the plague for…

Hope everyone has fun stuff planned today. The sun is out so I’ll try and get a quick walk in.

The internet is playing up where I am today so I’m not going to be able to get any news for you. Back to normal from tomorrow.

The Italian trip continues with the blue show and that could make for a good Smackdown. Last week saw the announcement of Undertaker vs. Batista II in a Last Man Standing match at Backlash, complete with some wacky bad partnering. I’m curious to see what else they have on tap around here as Smackdown has been pretty good as of late. Let’s get to it.

Happy Saturday Night, all. Not for me, though. I’ll be spending all day finally getting my stuff from my old apartment into my new one so I don’t have to sit in a lawn chair and folding table to use the computer or sleep in a blow-up bed. As a result, this is being created Friday night, so sorry if I missed any further critical details about Tommy Dreamer and Ric Flair being animals.

You know what they need to do? Join the Nintendo Fun Club, that’s what. Have YOU?

I just fancied watching this pay-per-view, which was the first In Your House event to be shown live in the UK, so a review follows. This was from the mature peak of my fandom as a fully-fledged Bret Hart and Hart Foundation fan, although the rising Steve Austin was a big favourite too. 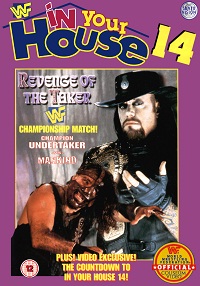